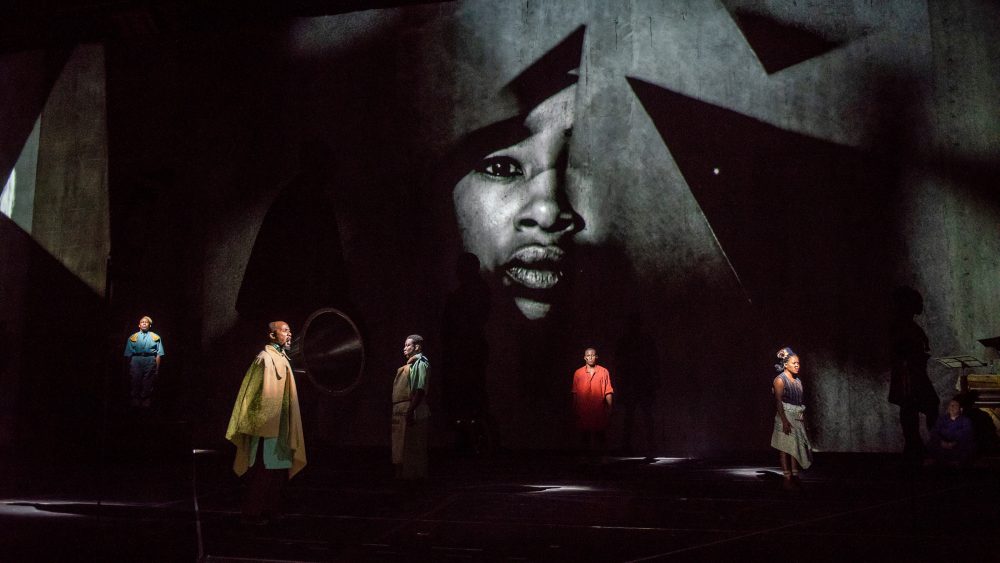 Contemporary art has never been more popular: Gagosian has a million Instagram followers; art fairs continue to proliferate, most recently with Frieze planting a flag in Los Angeles; and viewers line up for a chance to see once-in-a-generation blockbuster museum shows. And artists, well, they keep on creating, whether alone in their studios, like the singular Jasper Johns, or with an extensive cast of collaborators, as in the case of William Kentridge and his moving 2018 performance piece about World War I, The Head and the Load. While jaw-dropping auction prices ($91 million for a Jeff Koons sculpture? Really?) may grab the most headlines, it’s each individual viewer’s encounters with art that inspire a reconsideration of accepted truths. Or maybe a nod of recognition. Or just a chuckle. Below are some of the art experiences of the past year that were the most illuminating, or even transcendent.

BLOCKBUSTER:
Andy Warhol, From A to B and Back Again

It’s hard to think of a more daunting task for a museum curator than planning a retrospective of an artist who has been not only immeasurably influential to generations of his successors but is also, as the creator of scores of instantly identifiable artworks, nothing short of a household name. When museumgoers think they already know everything there is to know about a giant like Andy Warhol, the pressure is on.

Which makes Donna De Salvo’s blockbuster Warhol exhibition at the Whitney Museum of American Art this past fall and winter all the more remarkable. De Salvo, the Whitney’s deputy director for international initiatives and senior curator, first met Warhol when she was a young curator and has mounted four shows of his work before this one. More than a compendium of his greatest hits—though Campbell’s Soup Cans, Triple Elvis [Ferus Type], Camouflage Last Supper et al. were on view—the Whitney retrospective humanized the revolutionary Pop master, delving into his life as the devoted son of impoverished Slovakian immigrants, an openly gay man (who still attended mass) and a top-notch fashion illustrator whose career was disrupted by the very medium that would come to define his own legacy: photography.

The photo-based silk-screening process—itself a metaphor for the era’s mass production—that he honed to imperfection is just one of his gifts to contemporary art. His obsessions are today’s: consumption, celebrity, sexuality, violence, the ubiquity of the image in modern life. (Does anyone doubt that, were Warhol alive today, he would own Instagram?) Much of his oeuvre looks as if it could have been made yesterday. As De Salvo masterfully demonstrated, Warhol was both perfectly of his time and ahead of it. Everyone, as he predicted, may indeed be famous for 15 minutes—except Warhol himself, whose fame will be eternal.

PERFORMANCE:
William Kentridge, The Head and the Load

William Kentridge, The Head and the Load  Stephanie Berger.

The South African artist William Kentridge has been interrogating his native land’s fraught history for decades, and with his epic 2018 performance piece The Head and the Load he illuminates the continent’s long-overlooked role in World War I.

The European colonial powers conscripted nearly 2 million Africans, who served primarily as porters, typically unarmed and unshod as they carried the white man’s weapons and supplies across the hot, mosquito-plagued terrain. Countless died; the ones who survived and hoped for a share of wealth or power in their homelands as payment for their loyalty were sorely disappointed.

The piece, a mesmerizing production incorporating song, dance, excerpts of historical writings, Kentridge’s signature projected drawings and dozens of performers in a solemn procession, premiered at London’s Tate Modern before being performed at Ruhrtriennale in Germany, and then in the enormous Drill Hall of New York’s Park Avenue Armory, leaving audiences hushed. Ambitious in scale, to be sure, the work is no less ambitious conceptually, capturing all too painfully the dehumanizing scourge of colonialism.

The western stretch of New York’s Chelsea can feel like two neighborhoods: First there’s block after block of elite white-cube galleries filled with contemporary art that can be hard to parse for the uninitiated. Then, a story or two above is an elevated promenade known as the High Line, an old rail line that has become so clogged with tourists traipsing from the Whitney up to Hudson Yards, it makes Times Square feel like the middle of Idaho by comparison.

Enter respected dealer Paul Kasmin, who trades in the likes of Robert Motherwell, Lee Krasner and Robert Indiana. When it came time to build his latest among a small constellation of galleries, Kasmin turned the roof, which is flush with the High Line, into a 5,000-square-foot sculpture garden, uniting the two Chelseas. While the High Line has a terrific outdoor art program of its own—Simone Leigh’s poignant, 16-foot-tall Brick House is the latest draw—Kasmin’s new green space, which also features a grid of skylights that flood the gallery with natural light, feels like a warm invitation from down under. Throughout the winter and spring, Max Ernst’s whimsical bronzes seemed to look you straight in the eye and beckon you to visit the world below.

It’s not for nothing that he’s oft named as America’s greatest living artist: At 89, Jasper Johns continues to invent, pushing himself to explore painting and printmaking as though he had just picked up a paintbrush for the first time.

His remarkable exhibition of recent works at Matthew Marks Gallery in New York’s Chelsea this past winter demonstrated yet again that his is an insatiably curious mind. In piece after piece, he riffs on photographs of a Vietnam War soldier and the late British artist Lucian Freud, both men looking distraught, holding their heads in their hands in a gesture of despair. Johns depicts them in various degrees of abstraction and representation and uses an art-supply store’s worth of media, laying bare the countless choices an artist makes every day, alone in the studio. Such other Johnsian motifs as the alphabet, a small boy in silhouette and an urn formed by the negative space between two facing profiles also abound. The show was the perfect teaser to what promises to be a major retrospective, shown simultaneously at the Whitney and the Philadelphia Museum of Art in October 2020.

CAREER RETROSPECTIVE:
Vija Celmins, To Fix the Image in Memory

Rhythmic and meditative and gray, Vija Celmins’s artworks have a melancholy poetry about them that can haunt the mind long after viewer and object have parted ways. Celmins is what is sometimes called an artist’s artist—universally admired among the cognoscenti if little known by the broader public. Thanks to a much-deserved career retrospective at the San Francisco Museum of Modern Art this past winter, Celmins is due for a change in status.

Born in Riga, Latvia, in 1938, Celmins fled the Soviets with her family late in World War II and lived for a time in German refugee camps before immigrating to the US as a child. Encompassing more than five decades of her work, the exhibit spanned Celmins’s California period, beginning in the 1960s with her deadpan still lifes of every object in her studio—a lamp, a hot plate, fried eggs in a pan—and continuing through her war images and ocean drawings, before following her to New York, where she depicted the night sky and delicate spider webs, all with an intense precision. Celmins does not align easily with any particular art movement; her obsessions are her own. And they reward close looking.

Celmins fans who missed SFMOMA’s exhibition are in luck: The retrospective is on view at the Art Gallery of Ontario in Toronto through August 5 and arrives at the Metropolitan Museum of Art in New York September 24.

The art world is abuzz these days with chatter about opening the canon to more women and artists of color. But with a revelatory recent retrospective at the Guggenheim Museum in New York, Hilma af Klint didn’t simply enter the canon, she exploded the very idea of it.

That this hitherto little-known Swedish artist’s experimentations with pure abstraction in the early 1900s preceded those of Wassily Kandinsky, the man generally credited with making the first nonobjective painting, should give us pause: What else about the art history timeline is plain wrong, or at least implicitly biased?

Revisionist history aside, the exhibition was a visual eye-opener. The deeply eccentric af Klint was inspired early on by nature, then by a slightly woo-woo take on the spiritual world, but she translated those ideas into fluid lines, chalky colors and graceful compositions, in works both small enough to hold in your hands and monumental enough to command a house of worship, which she envisioned for her cycle The Paintings for the Temple.

Af Klint later stipulated that her work not be exhibited for 20 years after her 1944 death. Seventy-five years later, this show was a massive critical and popular hit, setting a new attendance record at the Guggenheim with more than 600,000 visitors. Some things are worth the wait.

Sometimes all it takes is one supremely determined woman—and a whole lot of money. Hats off to Grażyna Kulczyk, a billionaire with a passion for contemporary art. After her plans to build a museum in her native Poland fell through, Kulczyk decamped to Switzerland, where she acquired the remains of a 12th-century monastery in the tiny hamlet of Susch and turned it into a showcase for art in an environment that encourages quiet contemplation.

Zurich-based architects Chasper Schmidlin and Lukas Voellmy excavated 9,000 tons of rock from the mountain on which the monastery is perched to create cave galleries, making the museum, which opened in January, a must-see as much for its design as its art. The inaugural exhibition, A Woman Looking at Men Looking at Women, which draws from Kulczyk’s collection as well as loans and is up until the end of the month, nods to her interest in feminist art by such influential practitioners as Louise Bourgeois, Marlene Dumas and Judith Bernstein.

In addition to mounting shows, the museum is set to sponsor artist residencies, an annual academic symposium, experimental dance performances and a research institute focused on the role of women in the arts and sciences. Kulczyk likened a visit to a religious pilgrimage. “A pilgrimage is a demanding act as it’s not only going from A to B but it needs devotion to do so,” she recently told Robb Report. “For me, art has a very sacred texture, so pilgrimage became an obvious means of describing it.”

In the tradition of some of the country’s greatest philanthropists—think magical names like Whitney, Getty and Frick—billionaires Mitchell and Emily Wei Rales have gifted the art-viewing public access to their renowned collection of postwar and contemporary art.

Glenstone, located in off-the-beaten-path Potomac, Maryland, originally opened in 2006, but a sprawling expansion, including a complex of 11 galleries dubbed the Pavilions—nine of them devoted to one artist each—was inaugurated in October. A lucky 400 or so visitors are admitted each day to see works by such celebrated 20th- and 21st-century figures as Ellsworth Kelly, Cy Twombly, Robert Gober and Martin Puryear and wander the idyllic grounds, dotted with site-specific artworks.

“It’s a sublime feeling,” Emily told Robb Report shortly before the reopening. “To be able to take it in without being crowded by people taking selfies is something pretty rare today.” It’s a private venture with about as much essential art and as little obvious ego—note the name is not the Rales Museum—as you could hope for.