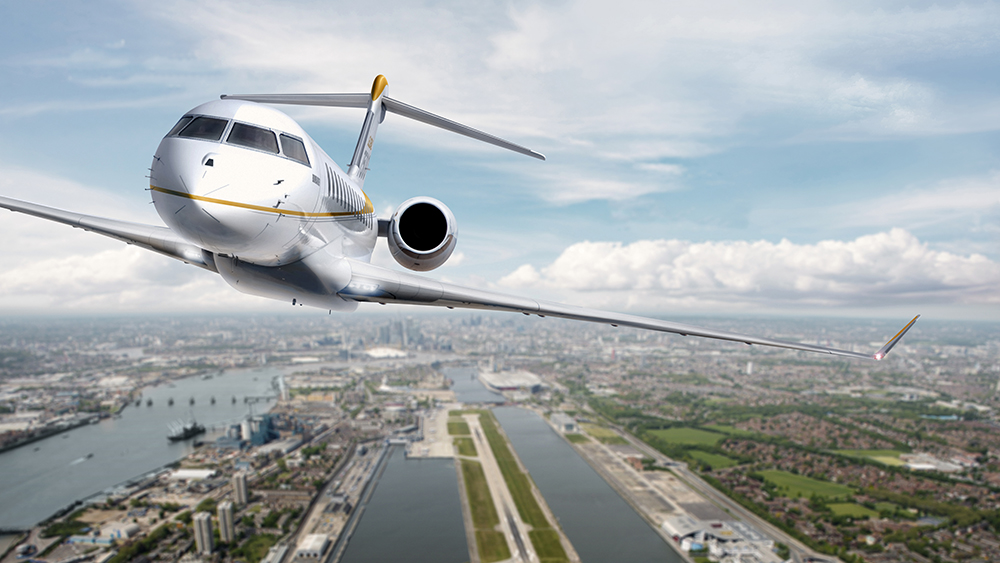 Each year, a few categories come and go within our list of the best aircraft of the last 12 months. This year, we added space flight. What once seemed like science fiction or merely the realm of aeronautic science is now becoming a commercial reality. This last year saw Virgin Galactic and SpaceX perform successful missions into space—and back. Expect more leaps forward in the next 12 months.

It is an interesting time for not only space travel, but private aviation, too. While larger and larger jets are flying farther and faster, smaller personal jets and enthusiast aircraft are thriving as well. And let’s not forget the vertical takeoff and landing craft that shifted into hyperdevelopment mode. There’s never been a more exciting time to be airborne.

After much anticipation, the first Bombardier Global 7500 business jet entered service in December of 2018—and to positive fanfare. Since coming on the scene, the 7500 has wasted no time in breaking as many records as possible. At press time, these include distance (between Singapore and Tucson, Ariz.) and speed (between New York and Los Angeles). While performance for a private jet got an upgrade, so did comfort—the Bombardier Nuage chair with its free-floating base is the first true seat revamp in 30 years for the private aviation sector. The 7500 accommodates 19 passengers, has a range of 7,700 nautical miles (8,861 regular miles—say, from LA’s Van Nuys Airport to Dubai or San Francisco to Singapore, among many other pairs) and has a top speed of Mach 0.925. Even the crew gets a posh boost with a private seat that fully reclines for sleeping and is separated by a privacy door. The flexible cabin plan could include, for example, a master suite with queen bed with storage and an en-suite bathroom with shower; a media room with sofa that can become a bed (more stash space underneath); a dining and living/conference area (with a table that folds out for six); the crew rest suite across from the galley (with all the secret hideaway drawers and popup stow slots as well as an oven and sink for fresh preparations); and another forward bathroom. This jet really has everything you might need for that ultralong-range flight.

Controlling sound, movies, blinds and lights—from any seat or bed— just got easier with a state-of-the-art pop-up dial with an OLED display. This dial, named the “nice Touch cabin management system,” is part of a platform developed in collaboration with Lufthansa Technik. And it’s pretty cool—as is the Ka-band satellite communications for fast internet speeds. There’s no doubt that the world’s largest and longest-range business jet lives up to the hype.

If anyone is going to truly take a vertical takeoff and landing (VOTL) concept to market, our bets are on chopper experts Bell. With seven decades of experience as a helicopter manufacturer, and as the builder of the V-22 Osprey and the V-280 Valor tiltrotor military aircraft, Bell carries cachet among the new and established companies developing vertical takeoff and landing aircraft that also fly horizontally like an airplane. So while you can dismiss some of the recent VTOL concepts as pies in the sky, you can’t do that here. The Bell name lends credibility to the four-passenger hybrid-electric VTOL, which features six 8-foot-diameter ducted fans that tilt to make the instant transition from vertical takeoff to horizontal flight. Plans call for the Nexus to initially be flown by a pilot, but eventually it could fly autonomously. The craft will have a range of about 150 miles and a top speed of roughly 150 mph. It will be small enough to take off from and land on most helipads. Bell hopes to begin flight tests with a prototype in 2023 and have the Nexus in service by the mid-2020s.

For those who need their private jet to be able to cross the country (or the Atlantic) on the regular, the Bombardier Challenger 350 has been the business jet of choice, averaging more than 60 deliveries annually in its first four full years of service (2015 through 2018), many going to NetJets, Flexjet and other private-aviation companies that appreciate the reliable, workhorse nature of the Challenger 350 and see its $27 million price as a solid investment. You just couldn’t fly into airports such as Aspen or London City because of steep approaches or shorter runways. But the aircraft’s capabilities and cabin comforts seemed to outweigh that negative. It has a range of nearly 3,700 miles, a max cruising speed of 548 mph, and room for 10 passengers. The cabin is just over 25 feet long, 6 feet tall and 7 feet 2 inches wide. The standard configuration seats eight passengers in two sets of four comfy club seats. Last year, however, Bombardier enhanced the Challenger 350 so that it could receive steep-approach certification. Now it can land at (and take off from) airports that used to be off limits. The latest version of the aircraft needs less than 2,400 feet of runway to land.

The Cessna Citation Latitude was the third most-delivered business jet in 2018, behind the Cirrus Vision Jet and Bombardier’s Challenger 350. In its own midsize class, however, the Latitude was out in front, with 57 handed over last year, up from 54 in 2017. While three more wouldn’t seem like much in other sectors, when you’re talking about a $17 million piece of kit, each and every one is significant. Desire for the Latitude is growing.

Perhaps it’s because its flat-floor cabin has six feet of headroom. Or maybe it’s that 22-foot cabin’s ability to seat nine passengers. The pressurization system gives the feel of flying at 5,950 feet when the jet is actually cruising along at 45,000 feet. With four passengers, the Latitude can fly more than 3,100 miles without stopping at its 513 mph max cruising speed. Garmin’s G5000 touch-screen avionics with synthetic-vision technology give top-notch guidance in the cockpit.

Quick urban hops and jaunts to remote areas that don’t necessarily have an airstrip got a lot more luxe—and safe—last year. ACH, the Airbus corporate helicopters division launched in 2017 that’s dedicated to corporate and personal choppers, delivered the first ACH135 Helionix in September. The initial example features a five-seat configuration (plus pilot) with ACH’s sports car–inspired Line series interior. Most noteworthy is the bird’s avionics system, which was designed to improve situational awareness and to reduce the complexity of the system and number of displays pilots have to keep track of. It also has a more advanced autopilot system to make flying simpler and safer, including an auto hover “pause” button (ideal when faced with low visibility or busy environments), a “go-around” button (the ACH135 will automatically fly around and reposition itself on the best landing approach) and automated engine management (ensuring a smooth and safe flight even if one of the two engines fails). Two turboshaft engines power the agile aircraft to a maximum cruise speed of 137 knots and a top endurance of 3 hours and 39 minutes. The cabin offers up large windows for great visibility, as well as its corporate jet–style finishing, such as hand-sewn soft leather seats.

The most-delivered light jet for each of the past seven years became even better in 2018, when Embraer began producing the Phenom 300E, giving the popular plane a tech and comfort makeover. Embraer redesigned the interior and installed, among other features, a new cabin-management and inflight-entertainment system by Lufthansa Technik. The system is housed in a panel that runs along the centerline of the aircraft’s ceiling and includes two 7-inch swing-down displays. Reading lights and fans have been moved into the panel to create more headroom above the seats. The panel also includes new ambient lighting. The redesign creates more space, specifically more aisle room (in addition to the extra headroom), while adding larger seats, which now have broader backs and extendable head and leg rests. The 300E, which is usually configured to seat six passengers behind the cockpit (but can seat up to nine plus pilot), has the same range and high cruising speed as its predecessor: 2,270 miles and 521 mph. (Base price: $9.45 million.)

Founded in 1986 by Andrew and Jane Winch as a yacht-design company—both exterior and interior—London-based Winch Design has made a name for itself by creating bespoke aviation, yachting and land-based masterpieces, inside and out. This year, we applaud the studio for its custom-interiors concepts for Boeing Business Jets and Airbus Neo aircraft.

By employing irregularly shaped spaces within the cabin, with molded paneling and movable (but securable) furniture, the Winch team creates compelling, adaptable and livable spaces that inspire relaxation in flight but are at the ready to do business when the time is right.

“It was intense and magical and serene and almost unlike anything anyone can imagine.” That’s how Beth Moses, Virgin Galactic’s chief astronaut instructor, described her trip as a passenger aboard VSS Unity, Virgin Galactic’s rocket-fueled space plane that, in late February, traveled beyond the Earth’s atmosphere and into space for the second time—and for the first time with a passenger. If all goes as planned, anyone who can afford a $250,000 ticket won’t have to imagine what Moses described; he or she will be able to experience it. So far, more than 600 people have reportedly purchased tickets to fly aboard a Virgin Galactic space plane. It’s doubtful any civilians will make the trip by July 18, the 50th anniversary of the launch of Apollo 11 and the date by which Virgin Galactic founder Richard Branson has said he hopes to make his first space flight. However, the February flight was certainly more than just a small step for the company, which Branson established 15 years ago; it was a giant leap for space tourism. After flying VSS Unity 51.4 miles above sea level (NASA places the border between the Earth’s atmosphere and space at 50 miles above sea level) and landing it safely in the Mojave Desert in December, Virgin Galactic’s two pilots were joined by Moses for the February flight, which reached an altitude of 55.87 miles and a speed of Mach 3.0. Moses was on board to evaluate the space-flight passenger experience: the intense, magical and peaceful sensation of weightlessness and the sights of the curve of the Earth and the star-filled sky.