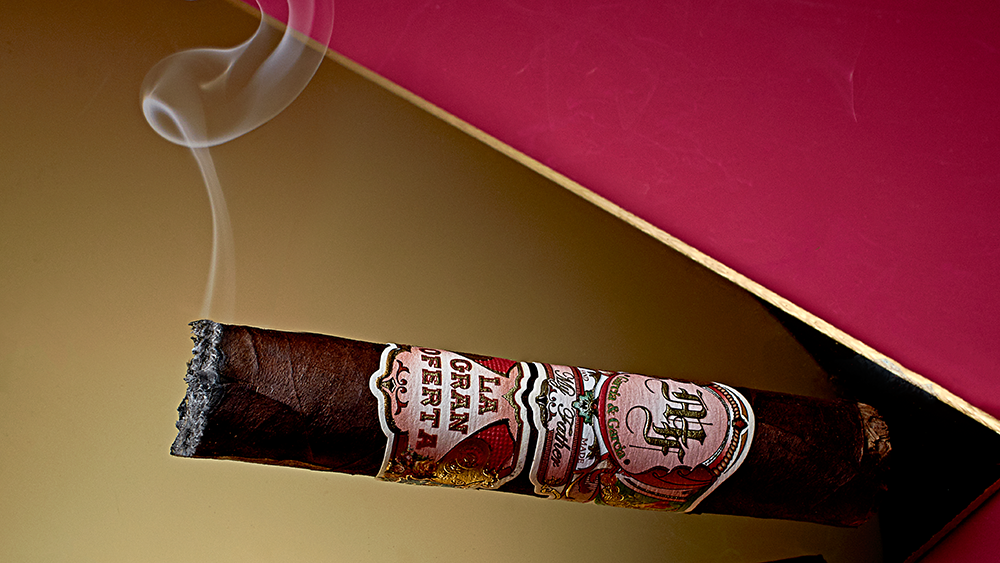 It takes focus and respect for both palate and terroir to narrow down the top cigar releases from premium makers, but here you have the outcome of our smoke trials over the past year. You’ll see that while the majority of non-Cuban cigars continue to be made in the Dominican Republic, there’s a heightened emphasis on the rich tobaccos of Nicaragua—two-thirds of this year’s Best of the Best cigars come from that somewhat beleaguered country. We’re also seeing richer, but not necessarily stronger, cigars. This is coupled with a shift to larger ring sizes, for fuller flavors. The result is a quality and variety that’s never been better.

To smoke or not to smoke . . . that is the question this cigar asks of you. The salomon is not one for the inconspicuous; it’s a big, imposing showstopper. With its perfecto cap and clipped perfecto foot, it’s an easy one to cut and light. But it is a difficult, thick shape to make and takes time to smoke, which means the blend must be carefully constructed throughout. Cuban-trained master cigar roller Hamlet Paredes, who is part of Rocky Patel’s cigar-making team, makes one of the most elegantly smokable salomons we have ever put a match to, thanks to its Ecuadoran Habano rosado wrapper and Nicaraguan and Honduran filler blend, making this 75/8 x 58 figurado worthy of a Shakespearean soliloquy. ($11.55.)

This was one of the most interesting things unveiled at the International Premium Cigar & Pipe Retailers Association trade show last year. It all began with a bale of 1995 Piloto Cubano tobacco discovered in one of General Cigar’s warehouses, where it had been aging for 23 years. These leaves ended up forming the core of a filler blend for what can best be described as a 71⁄4 x 54 enhanced Churchill. In all, this cigar features eight tobaccos from five countries, including 2011 and 2014 vintage Nicaraguan leaves aged in Spanish sherry barrels. These, in turn, are surrounded by Honduran tobaccos from the 2002 and 2011 harvests, which are secured with a Connecticut broadleaf binder and a silky Ecuadoran Sumatra wrapper, which developed a unique reddish hue during the extra-long curing process. The result is a rich smoke with a saddle leather and rain forest aroma intertwined with flavors of sweet chocolate and ginger. Only 180 boxes of 10 cigars each are available, making this a Spectre that will soon disappear. ($90.)

Last year, to celebrate the 50th anniversary of what has become known as the White Band, Davidoff enlisted five of the world’s most celebrated chefs who are also connoisseurs of premium cigars to create the perfect palate-pleasing cigar. So it was that Thomas Keller of the French Laundry in the US, Alvin Leung of Bo Innovation in Hong Kong, Klaus Erfort of Germany’s Gästehaus, Heiko Nieder of the Restaurant in Zurich and Shaun Rankin of London’s Ormer Mayfair visited Davidoff’s tobacco fields and factories and tested multiple blends. They settled on their favorite: a medium-plus-strength 6 x 54 toro, full of creamy chocolate, pepper and ginger, with a gentle finish. “One of the main things all of us wanted to achieve was a cigar that could be smoked throughout the day and in the evening,” says Keller, “because for a chef, there’s no set time when you can sit down and smoke a cigar.” All hail the all-day gourmet smoke. ($30.)

After growing tobaccos for some of the best-known brands, it was only a matter of time before Nestor Plasencia and his three sons, Nestor Andrés, José Luis and Gustavo, would start making their own cigars. And we’re glad they did. One of their newest offerings, the Cosecha 146, is arguably their best to date. “Cosecha means crop,” says Nestor Andrés, “and this is our 146th crop, which consists of Honduran and Nicaraguan tobaccos from 2011 and 2012. So this is not a Nicaraguan puro, which makes it different from the other cigars we have produced.” With a 2011 Honduran wrapper and Nicaraguan and Honduran filler leaves, it has a gentle earthiness, a Nicaraguan characteristic that the Plasencia family has preserved for five generations. ($11–$15.)

A collaboration between cigar entrepreneur Akhil Kapacee and Havana cigar impresario Mitchell Orchant of London’s C.Gars Ltd., and made in Nicaragua in the Plasencia factory, this is a Nicaraguan puro that combines physical presence with aroma and a medium-rich and spicy flavor. The maduro wrappers have been aged a minimum of two years to bring out their deep, natural color and flavors. Kapacee likens this to the acorns that the free-ranging Ibérico pigs in Spain feed upon, which gives their meat such a unique character. While we did not detect any jamón in this cigar, we welcomed nuances of sweet ginger and burnt cedar. “The challenge was to get something with an old-world complexity and progression combined with the richness of a maduro cigar,” says Kapacee. “I smoke this after a big dinner accompanied by a smoky Scotch, such as an Ardbeg, Lagavulin or Talisker.” ($7.60–$10.65.)

Not only was this the first cigar brand to be made in Nicaragua, it is the first cigar to celebrate 50 years of cigar-making in that country. The Cinco Décadas references the 1968 origins of the brand and is produced in Joya de Nicaragua’s original two sizes: a 7 x 50 El General and a 6 x 54 diadema. Both are Nicaraguan puros and are made with tobaccos aged for more than five years, resulting in a smooth, earthy sweetness, much like Nicaragua’s mineral-rich, red soil. Exceptionally rolled, they have been produced in a limited edition of 5,000 boxes of 10 cigars each, with 3,000 of those boxes allocated for the US. ($19–$20 per cigar.)

The name of this latest creation from the My Father Cigars factory in Estelí translates to “the great offering,” and it is. Taking both its artwork and name from a defunct Cuban brand that dates to 1913, the band, box and Ecuadoran Habano rosado oscuro–wrapped cigars inside are all equally stunning. Eye-catching packaging can only go so far, however. This cigar, with its medium-full, chocolate-laced flavor mingled with sweet cherries and a dusting of curry, makes us wonder what the original Havana brand must have been like. Certainly not as elegantly rich as this. Five shapes range from a 5 x 50 robusto to a 71⁄2 x 38 lancero, a challenging shape to roll while preserving the hearty integrity of the tobaccos inside. ($7.50–$8.50)

If a group of dedicated cigar smokers brainstormed what the perfect cigar bar would be, chances are they would end up conjuring something pretty close to this elegant 4,000-square-foot enclave inside Caesars Palace in Las Vegas that’s devoted to premium cigars, luxury spirits and gourmet cuisine. The walk-in humidor and accessories shop holds more than 1,000 of the rarest smokes, including Fuente Fuente OpusX, the Padrón 50th Anniversary Limited Edition and the complete line of My Father Cigars. On the other side of this sweeping circular glass enclosure lies a spacious lounge and gaming area with huge TVs and a 100-seat bar stocked with premium spirits ranging from Yamazaki 18 Year Old single malt to Pappy Van Winkle 23 Year Old bourbon. A separate garden courtyard has its own bar and fireplace. In addition, the Montecristo Clubhouse by Old Homestead, a private wood-paneled room with a separate filtration system, may be reserved by those who wish to enjoy a hand-rolled stogie with a coursed dinner ordered from the menu of Old Homestead Steakhouse, which, conveniently enough, is just across from the Montecristo Cigar Bar entrance.