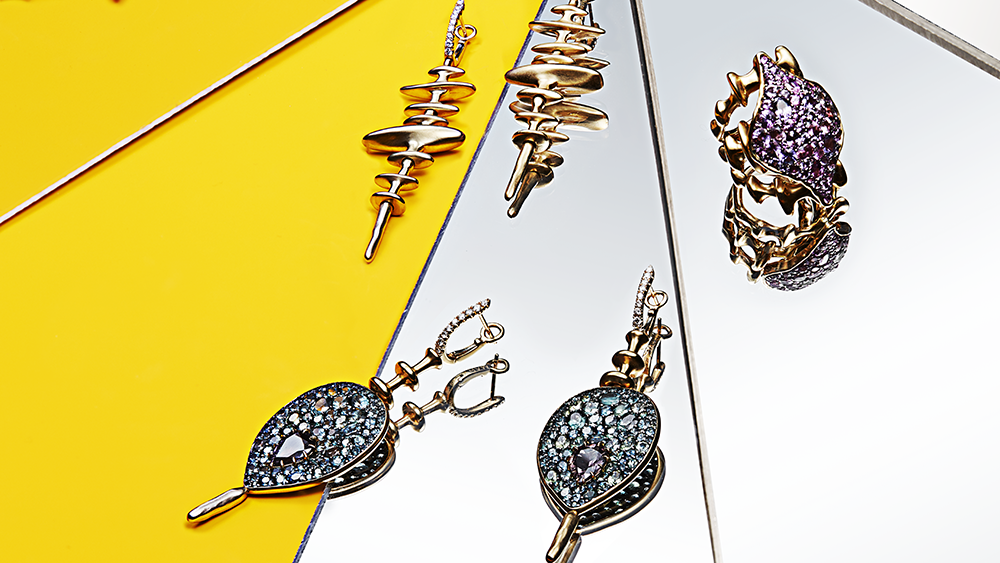 Jewelry is being celebrated and sold more like art—and it’s about time. It didn’t happen overnight, but in the past year in particular we witnessed a clear repositioning: More elite jewelers, including Hemmerle, Taffin and Suzanne Syz, exhibited at more high-profile international art fairs and galleries alongside contemporary artists, and the auction houses hosted individual designer exhibitions. There also has been a proliferation of artistically inclined jewelers forging sculptural pieces and innovative concepts in gold and gemstones, from the young haute joaillerie designer Emmanuel Tarpin, who is creating imaginative, modern pieces like we’ve never seen before, to familiar favorites Silvia Furmanovich and Fernando Jorge, whose artistic creations combine gemstones with unexpected elements, such as wood and the Brazilian tagua nut, respectively. Clients are firmly on board, appreciating their jewels’ artistry as much as its weight in gold and stones.

Sometimes the most show-stopping jewelry isn’t about the jewel at all. Take Piaget’s Green Aurora cuff and earrings that were unveiled at the Paris couture shows in January. Crafted by marquetry artist Rose Saneuil, they feature slivers of straw and sycamore and hornbeam woods, creating a magnificent cuff and earrings in shimmering shades of blue, green, gold and silver to reflect the palette of the aurora borealis. The cuff, shown, is appointed with a rare 14-carat Namibian tourmaline, but it’s the inventive marquetry that captures the imagination. The designs illustrate Piaget’s beguiling ability to combine disparate materials—precious and humble—in an artful expression.

Forget the classic solitaire. The all-important engagement ring—a lifelong symbol of love and betrothal—deserves much more thought and individualism, and we uncovered the best source for your custom design: David Michael. Working from a remote beachfront studio in Brisbane, Australia, twin brothers David and Michael Robinson make each piece by hand from the sketch to the finished design. What’s more, they work exclusively with the highest-quality, hard-to-find gems, like this 4-carat cushion-cut, type IIa diamond (classified as the purest stone) with artistic sapphire-and-turquoise inlay in a platinum and 18-karat-gold setting. Their workmanship rivals any Place Vendôme jeweler, but their creativity is unlike anyone else’s.

It takes imagination—and a degree of audacity—to set ancient Egyptian faience from 400 BC in stylish, contemporary earrings, but that’s what makes Hemmerle one of the greatest jewelers of this era. The fourth-generation, Munich-based family business knows no boundaries when it comes to creating statement-making designs with lasting power. Far from trendy or glitzy, Hemmerle’s unique pieces reflect an understated elegance. But at the same time, they turn heads.

In celebration of the jeweler’s 125th anniversary, Hemmerle unveiled the Revived Treasures collection in New York last year. It pays tribute to Egyptian culture, which revered jewelry as adornment and as a symbol of protection and power, through its juxtaposition of antiquities and contemporary motifs. Fashioned out of scarabs, amulets, bronze and gold, as well as precious gems, these thoroughly modern pieces are destined to be the heirlooms of tomorrow.

Alessandro Sabbatini is taking the seriousness out of high jewelry. The 31-year-old jeweler’s Sabba collection plays with scale, color and movement in designs such as these oversize chandelier earrings with 106 carats of aquamarines plus Peruvian opals. It’s easy to see why his pieces, including a curvaceous gold bangle with what appears to be a floating 4-carat diamond, appeal to contemporary art collectors: They’re striking, expressive and painstakingly made with the highest level of artisanship. Sabba pieces are also rarer than the work of many artists. Represented by FD Gallery in New York, Sabba’s collection is shown at TEFAF, where jewelry lovers are left to compete for the scant 40 or so pieces he makes a year. Available at FD Gallery.

It takes an exceptional eye for jewelry design and gems—and not a little self-restraint—to assemble Symbolic & Chase’s unrivaled trove, which spans the centuries and styles. Founder Martin Travis and director Sophie Jackson curate the London gallery’s offerings with the goal of finding “the most unusual and exceptional examples from each period,” as Jackson puts it. This year’s stand-out assemblage, which debuted at TEFAF Maastricht, met that stringent criteria, with pieces that ranged from a museum-quality Hellenistic intaglio ring to graceful diamond earrings (shown) by the elusive contemporary Greek jeweler Theodoros Savopoulos. It’s the promise of discovery that makes this Old Bond Street gallery worth returning to again and again.

Nature is undoubtedly the greatest source of inspiration for fine jewelers, but Boucheron took flowers to a whole new level when it literally transformed delicate petals into exquisite, everlasting jewelry. Working with a petal artist (who knew that existed?), Boucheron stabilized petals from the likes of hydrangeas and poppies without using pigment—therefore preserving the natural depth of color—then applied them to lightweight titanium forms and set the recreated flowers in gold with colorful gemstones. The imaginative rings, unveiled last year, illustrate that even on its 160th anniversary, the historic French jewelry house remains an unrivaled source of innovation.

Michal Kadar has redefined what’s possible with gold. Her latest invention breaks all the rules: After months of experimentation, she unveiled a patent-pending “Fur” jewelry concept made with diamond-tipped gold coils that shimmer and shake on bangles, rings and earrings like, you guessed it, fur. “I wanted to give the jewelry a soft, warm, sparkling look that is irresistible,” says Kadar, who established the Cadar collection in New York in 2016. She quickly became known for transforming the hard metal into fluid, tactile pieces that have a hand-crafted quality, and the latest designs prove she’s a master metalsmith.

Vram Minassian isn’t exactly an overnight sensation: He’s been producing exquisite handmade jewelry for other designers and private clients for 30 years. He finally harnessed his skill as a metalsmith and his obsession with sculpture when he launched his first collection under his own name. Like its gregarious 56-year-old Lebanese-born creator, Vram jewelry is bold and colorful, such as the Chrona Disco earrings, covered in purple and green sapphires; the oversized DiaChrona ring, with purplish-pink sapphires; and the 18-karat-gold Totem earrings (shown), all produced in his own Beverly Hills workshop and sold at top retailers, including Moda Operandi and Bergdorf Goodman. “There is a rhythm in my work,” says the designer. “The jewelry is clean, sculptural and has movement.” Minassian, too, is on the move.

Laurence Graff landed the big diamond catch this year: a 13.33-carat saturated pink rough stone discovered in Lesotho’s Letseng mine in February. The diamond kingpin paid Letseng $8.8 million for what some say is a risky acquisition because the stone is yet to be cleaved. But, if all goes according to plan, once it’s faceted, the vivid pink gem is likely to be worth many millions more than his purchase price. Recent auction sales indicate the appetite for rare pink diamonds is boundless: In April 2017, Sotheby’s sold the 59.60-carat internally flawless fancy vivid Pink Star diamond for $71.2 million (making it the world’s most expensive gemstone sold at auction), and in November 2018, an 18.96-carat fancy vivid pink diamond went for $50 million at Christie’s. Why the record-breaking prices? Only one in a million diamonds has enough saturated color to qualify as fancy vivid pink, which makes it a true rarity—and a worthy investment.

How do you stand out on the Oscars red carpet amid the sea of expertly groomed stars decked out in the latest couture gowns? Leave it to Lady Gaga. Not only did the multi-hyphenate Academy Award–winner steal the show with her steamy duet with Bradley Cooper, she also became the first woman to wear Tiffany’s $30 million yellow-diamond pendant necklace on the red carpet. Any jewelry insider will tell you this piece is about much more than the dollar value, impressive as that figure is. The stone is a freak of nature: Discovered in South Africa’s Kimberley Mine in 1877, it’s the largest yellow diamond ever mined, at 287.42 carats. Moreover, since it was acquired by Charles Lewis Tiffany in 1878 and cut to its present 128.54-carat cushion shape, the stone has never been shown outside of rare Tiffany exhibitions. Even if Lady Gaga had gone home empty-handed, she wore the best prize that night.

Marie Antoinette went down in history (and under the guillotine) for her dazzling jewels, exquisite clothing and generally outrageous lifestyle—did we mention the jewels? Deemed the extravagant doyenne of fashion during her reign, Marie Antoinette commissioned extraordinary pieces, and Sotheby’s offered 10 of those at its sale of the Bourbon Parma family jewels last November. It was a record-breaking event—not just for the $42.7 million those 10 examples commanded but also because it was a rare chance to own a piece of history. The star of the sale was an 18th-century pearl-and-diamond pendant that sold for $36.2 million (a record for a natural pearl); it was believed to have been packed up and whisked away to Brussels for safekeeping shortly before the king and queen were jailed.

Shopping for jewelry may never be the same again. When Cartier and Boucheron reopened their renovated stores late last year on London’s Bond Street and Paris’s Place Vendôme, respectively, they set a new standard in personal service, hosting VIP clients more like friends of the family than mere shoppers. Both boutiques have grand private living rooms appointed with important art and furnishings, and space for intimate gatherings, even a dinner party. Cartier’s flagship has a glass-roofed garden room with exotic plants and Asian-influenced screens, and a stylish bar where guests can linger over cocktails. Tucked away on Boucheron’s top floor is a lavish apartment (serviced by the Ritz Paris) where VIP clients can spend the night and soak in a marble bathtub with a sweeping view of Place Vendôme’s historic square. It’s like a five-star getaway in the city even before the world-class jewels enter the equation.

Colombia has long been a coveted source for some of the world’s top-quality emeralds, and now the country and its gems are looking even better. Under forward-thinking management, the Muzo mines have elevated mining practices with improved and stringent environmental, health and safety practices, and traceability from the mine to the dealer. Muzo’s progressive policies inspired some of the world’s best contemporary jewelry designers, including Ara Vartanian, Selim Mouzannar and Alice Cicolini (who designed the emerald and enamel ring), to create new capsule collections featuring the luminous gems. It’s a good time to go green.

Designer Nikos Koulis recast classic diamonds in a thoroughly modern context by juxtaposing them with gold snake chain that is twisted and knotted in curvaceous shapes. The result is long gold necklaces, big open-work bracelets and flowing earrings with dozens of diamonds that appear remarkably fluid and even sexy. It’s a new way to wear seriously big diamonds unpretentiously for day or evening. “I love the softness of the chain, and it feels good to the touch,” says Koulis. “The aesthetic is modern, yet it also has an art-deco style that permeates all my designs.” Unveiled in March for Koulis’s VIP clients at a two-day exhibit at the Rodeo Gallery in his native Athens, Greece, the designs epitomize the way chic women dress today—understated yet without compromising on luxury.