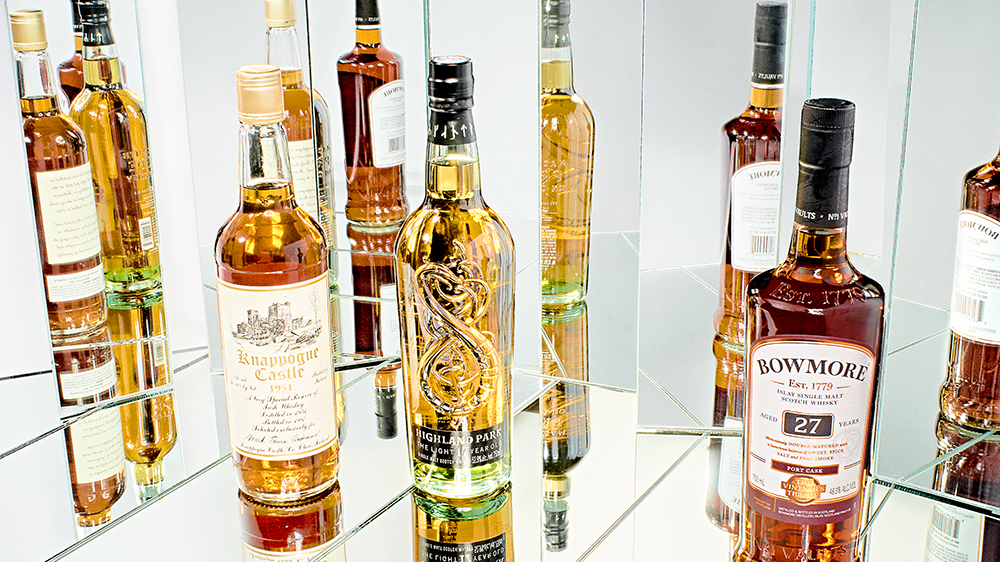 During the course of a year, the surface of a spirits editor’s desk becomes crowded with bottles tall and squat, brown and clear. In just about any other environment, it would be unacceptable to have your office look like the top shelf of a neighborhood bar, but for a spirits editor, a desk devoid of whisky, bourbon, gin, tequila and vodka would seriously endanger credibility. We’ve sampled hundreds in the last 12 months—forget about 5 o’clock, by the way, 11 am is the sweet spot for the palate—and a few bottles from masterful distillers around the world have distinguished themselves as exceptional. We share them with you here. 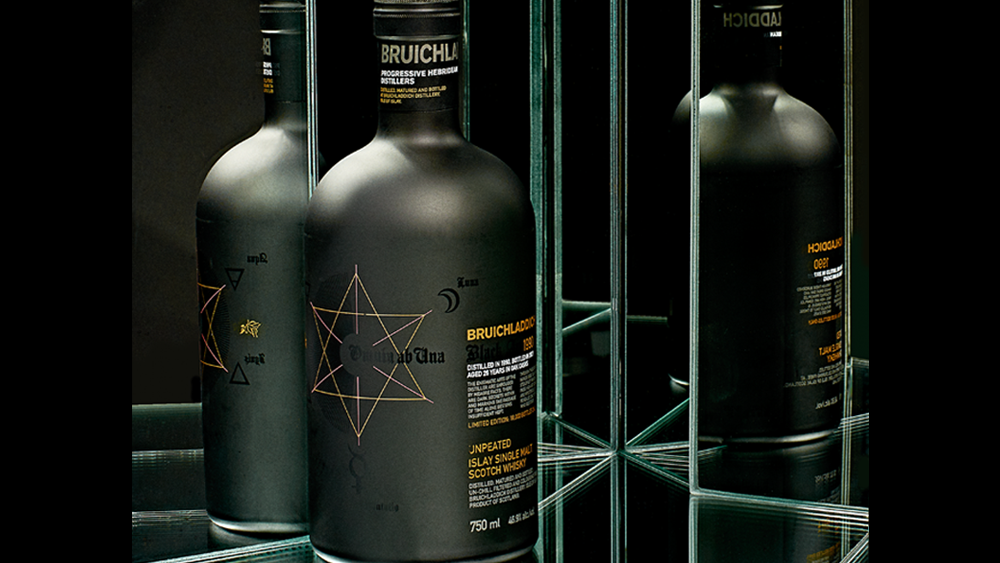 Bruichladdich has never won a Robb Report Best of the Best award, but this small Islay distillery, which proudly stands by its Victorian-era distillation equipment and has one of the strongest Scotch followings, has never made a whisky quite like this before. If the Macallan, with its sherried cask signature, and the Dalmore, with its progressive barreling, had a love child, it would be this.

New head distiller Adam Hannett, like his mentor Jim McEwan, holds the making of the 26-year-old spirit close to the vest, but here’s what we do know: The whisky, first made in 1990, was originally put into ex-bourbon American oak casks. McEwan later transferred the liquid to former wine barrels, though he would not reveal what kind of wine. We have to assume from the flavor profile that at least some of them were sherry casks. Hannett then put his own mysterious finishing touches on both this edition and the last, no. 5, released in 2015, and he’s staying mum, too.

But after a few sips discovering this unpeated single malt, any consternation over the secrecy falls away. Vanilla milkshake on the nose gets replaced with dark fruits like dates and figs. Banana and pineapple come through on the palate, as well as a surprising rose-petal freshness. The layers keep evolving. At just over 92 proof, 6.1 is a gentler version than its predecessors, smooth and warm. It’s dessert in a dram. ($425.) 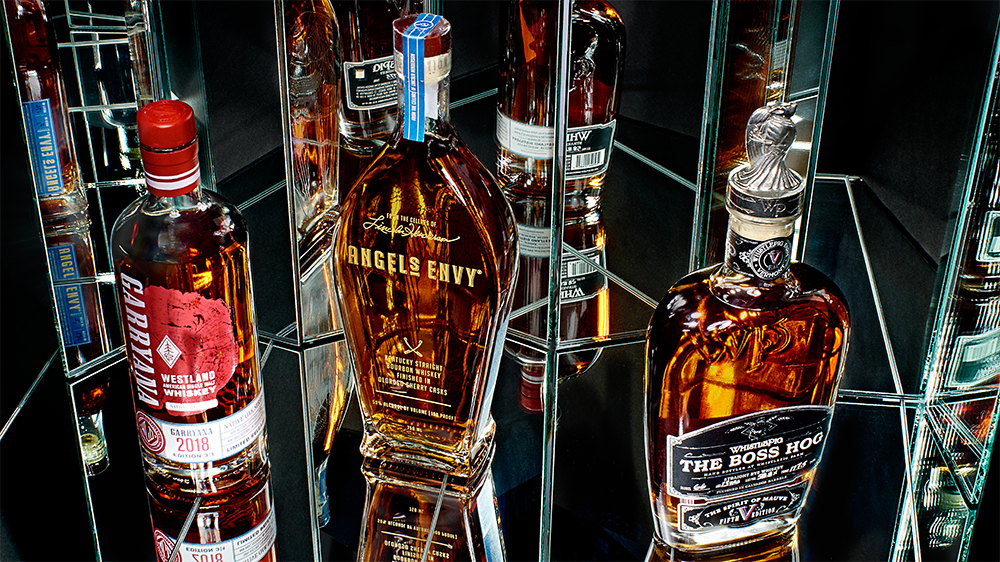 Master distiller Matt Hofmann, the cofounder of Seattle’s red-hot Westland Distillery, broke new ground a few years back by introducing a whiskey aged in barrels that had never before been used successfully to season spirits. Westland’s Garryana 2018: Edition 3|1 is the third in a series of whiskeys aged in Quercus garryana (aka Garry oak), a species of white oak indigenous to the Pacific Northwest. The unique wood type provides influences including molasses, dark fruit and honeycomb. Bold and immensely flavorful, it’s one of the most distinctive and highly coveted whiskeys made in America. And its success has inspired other US distillers to consider moving beyond bourbon and rye and make single malts Stateside. ($150.) 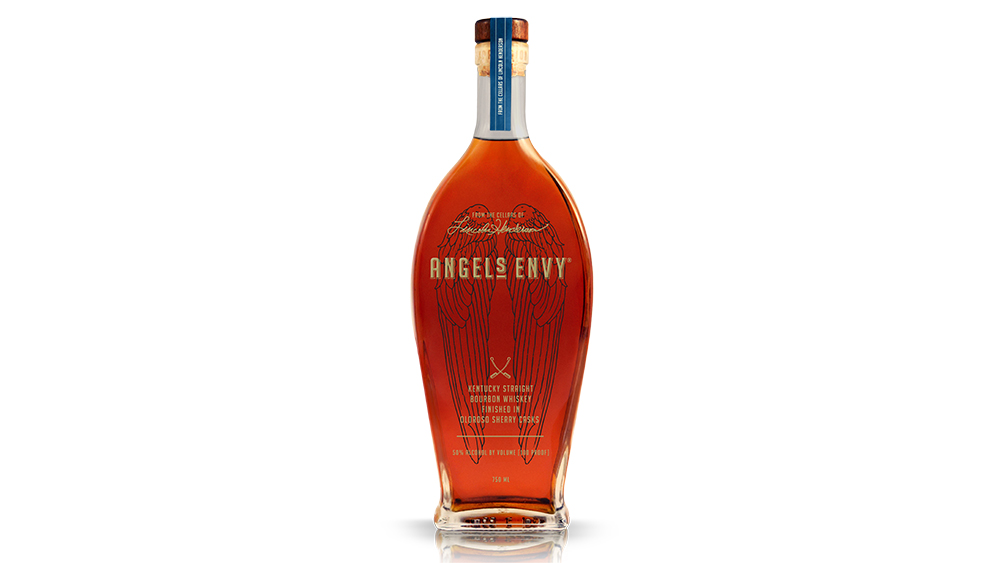 It’s not going to surprise connoisseurs that this bourbon, released in February, is already a challenge to acquire. Angel’s Envy is one of the cult Kentucky bottlings, and this is the brand’s first new release since 2013. Aside from its limited quantity of just 3,600 bottles, what makes this whiskey so rare and special is its finish in oloroso sherry barrels for two to three years—a step more likely to come from a Scotch distiller than a Kentucky one. Founder Wes Henderson believed the nutty quality of the Spanish sherry would be a solid match for the bourbon, and he wasn’t wrong. This is a remarkable whiskey. Before going into the sherry casks, it was aged in new American oak for between four and nine years, giving it some serious age for a Southern spirit. At 100 proof, it’s pleasant neat—with raisin and nuts on the nose and vanilla and caramel on the palate—but still has some oomph, so you feel like you drank some damned fine firewater. ($200.) 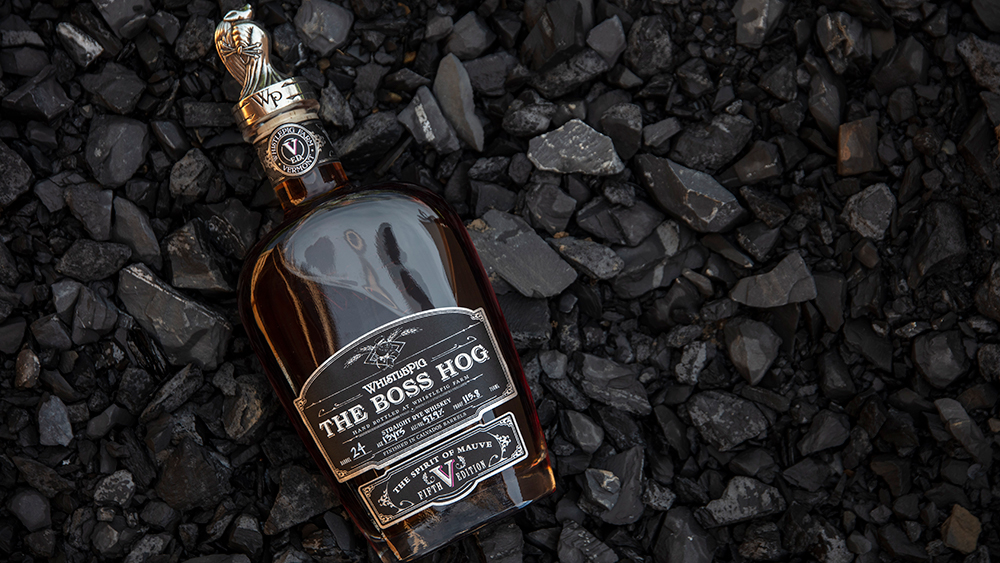 Since entering the rye world in 2008, WhistlePig has gradually risen to cult status, not an easy feat for a whiskey named for a groundhog. Initially sourced from Canadian distilleries, WhistlePig is now distilled on a 500-acre farm in Vermont, although—due to extensive aging required for its premium whiskeys—a portion of this rye’s mash bill is still being procured off-site. The brand’s Boss Hog releases represent the distillery’s best expressions, and the 13-year-old single-barrel Boss Hog V: The Spirit of Mauve embodies all the characteristics of a perfect rye. Named after one of the distillery’s recently deceased celebrity pigs, the cask-strength spirit brims with essences of maple syrup, dark chocolate, pipe tobacco and French oak. The spirit was finished in Calvados casks, a tribute to the late Mauve’s love of apples. And the whiskey itself serves as a tribute to WhistlePig’s late master distiller, Dave Pickerell, who steered the brand to this remarkable last bottle of his career. ($500.) 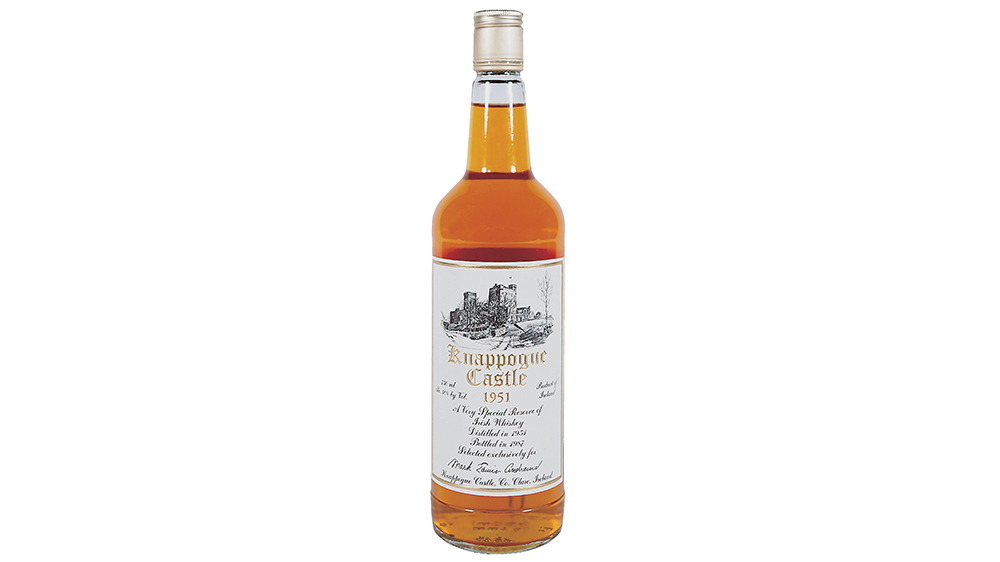 Ireland’s whiskeys haven’t courted age the way Scotland’s have, so when one comes along with some serious years behind it, you can’t help but add a little jig to your step. This spirit spent 36 years soaking in oloroso sherry casks before being bottled in 1987, making it one of the oldest single-malt Irish whiskeys in the world. Brimming with notes of honey, ripe plum, barley and oats, it’s as complex and unusual an Irish whiskey as you’re likely to encounter, a rare surviving cask amid the near collapse of the industry in the late 20th century. It’s sweet at the outset, with a sharp coppery texture and a bit of mustiness in the middle. The finish is lengthy and chewy, with notes of caramelized apples, nectarine and chicory. ($1,600.) 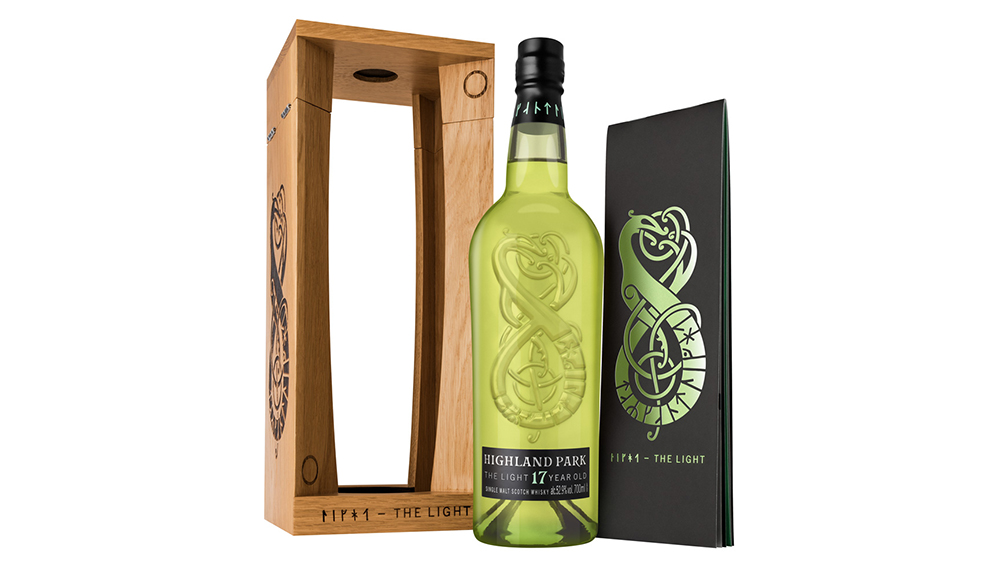 On the eve of winter 2017, Highland Park wowed the whisky world with The Dark, a special-edition 17-year-old single malt drawn from European oak sherry-seasoned casks. Only 28,000 bottles were released, which isn’t nearly as many as it sounds, and sold out swiftly. Its sister spirit was released on the eve of summer 2018—The Light also is a 17-year-old single malt, only this one was aged entirely in refill American oak casks. A refined whisky, it offers floral aromas and a smoky sweetness on the palate. Notes of lavender, honeysuckle and caramelized pear mingle with peat and cedar wood. The pale green bottle, embossed with a serpent dragon inspired by Viking lore, nods to the distillery’s Nordic ancestry. Tasted side by side, these two bottles offer up two extremes of whisky making (and sipping). Owning one is a score; collecting both, well, that’s a feat for a connoisseur with the heart of a Viking. ($335.) 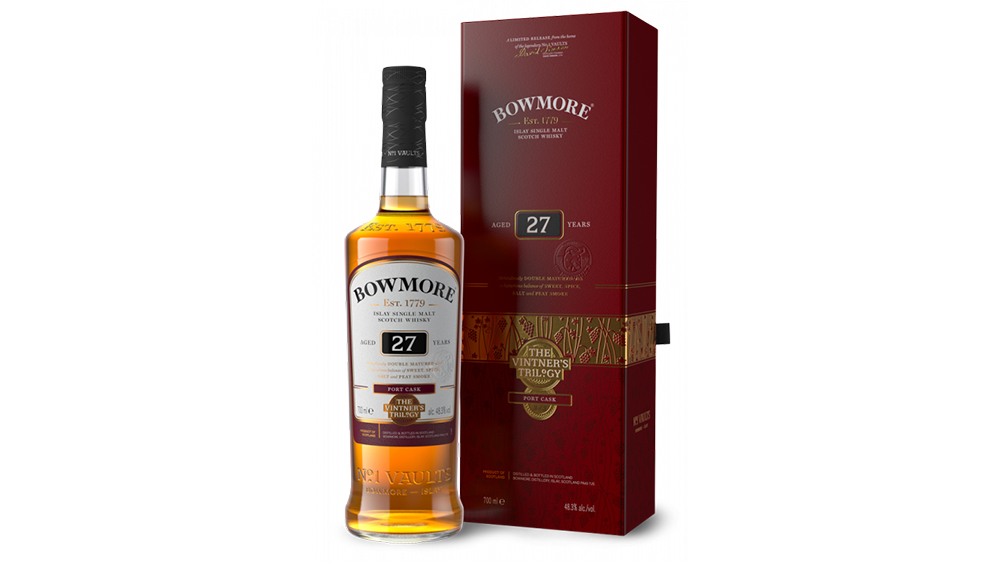 Released in September 2018, Bowmore 27 Year Old Port Cask spent 13 years soaking in ex-bourbon barrels, followed by 14 more in European oak casks that had previously been used to age Portuguese fortified wine. The casks were housed in the 240-year-old distillery’s famed No.1 vaults, one of the world’s oldest Scotch maturation houses. It’s a deep mahogany-colored whisky that offers sugarplum, lemon and salted cara- mel notes up front, followed by Bowmore’s signature smokiness and a vitalizing tang of raspberry coulis and red berries, finishing with dried herbs, tobacco, cranberries and a hint of pepper. ($520.) 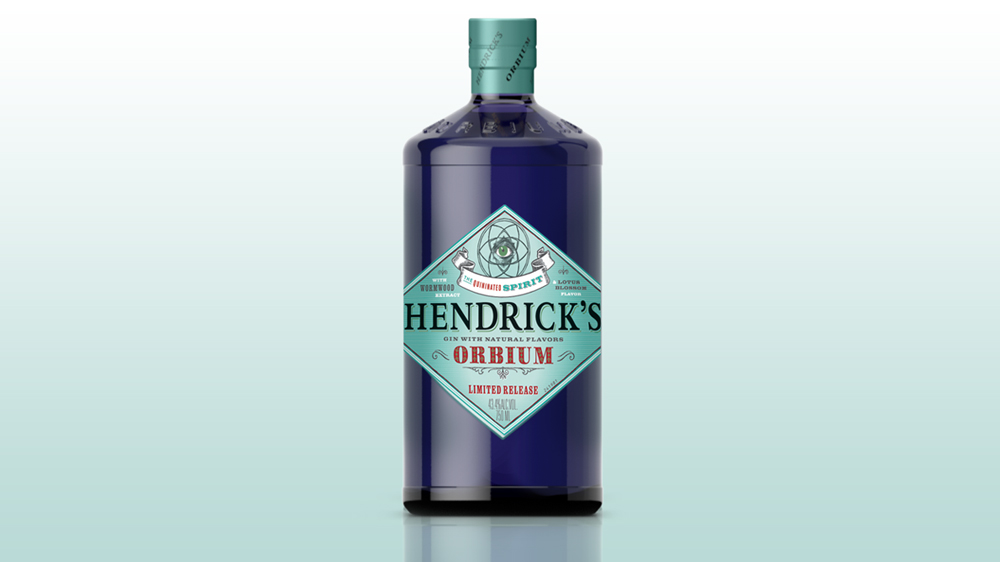 The master distiller who tilted the staid world of dry gin on its axis about 20 years ago when she created Hendrick’s by adding cucumber and rose to more conventional botanicals is at it again. Leslie Gracie of William Grant & Sons distillery in Scotland has tweaked her formula in another brilliantly minimalist way, and in the process, refreshed the world’s G&Ts and gin martinis.

In a gin world that’s gone a little wild of late with botanicals, Gracie chose only three to shake things up this time: quinine, wormwood and lotus blossom— the first, a cornerstone in tonic, of course; the second, a staple in vermouth; the third, a balance for the bitterness of the first two. Orbium is complex, bright, roundly bitter (in the best way), long and completely fascinating. Look for the cobalt blue bottle. ($50.) 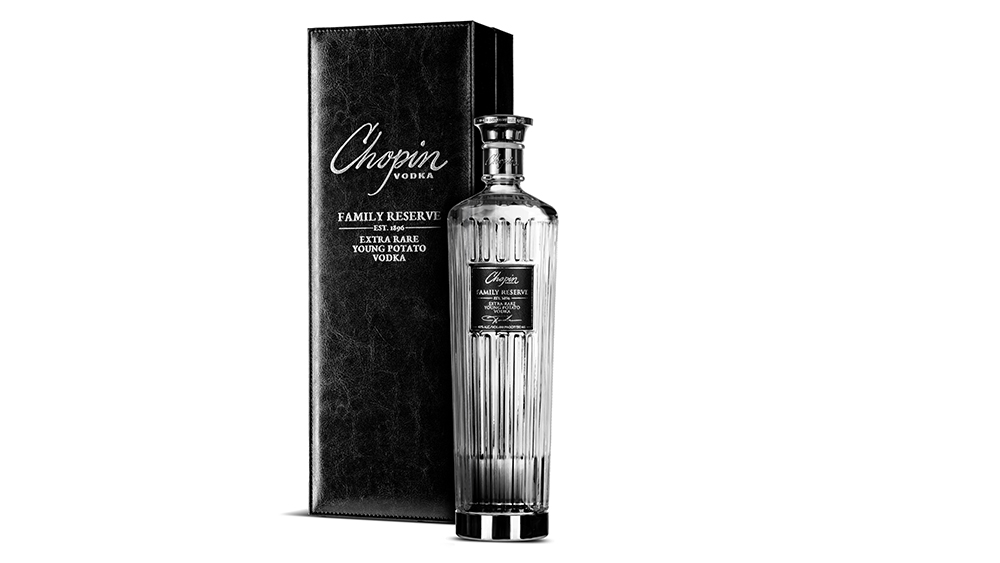 When it comes to cocktails, there are gin people and there are vodka people. For the vodka fans, Chopin has emerged as one of the great craft ultrapremium brands, and this release of its Family Reserve is light on burn and heavy (for a vodka) on flavor, with a rare mellow, creamy richness. The not-so-secret ingredient is a particularly special spud: the new potato, which has never been used in a premium vodka before. Founder Tad Dorda (the man originally behind Belvedere) has worked to resurrect Poland’s unusual, heirloom varieties, planting some on the family farm and experimenting with using them at different stages of growth.

The youthful estate-grown ’taters in this vodka were harvested in the peak of summer in 2016 at just three months old, rather than the more typical six-month mark. The early harvest results in less starch and a delicate sweetness, and it also means that more potatoes are needed to make just one bottle— about 25 pounds per. The spirit rested in 50-year-old Polish oak barrels for nearly two years before bottling, giving it time to smooth out. We can’t imagine a better vodka for a classic martini. ($150.) 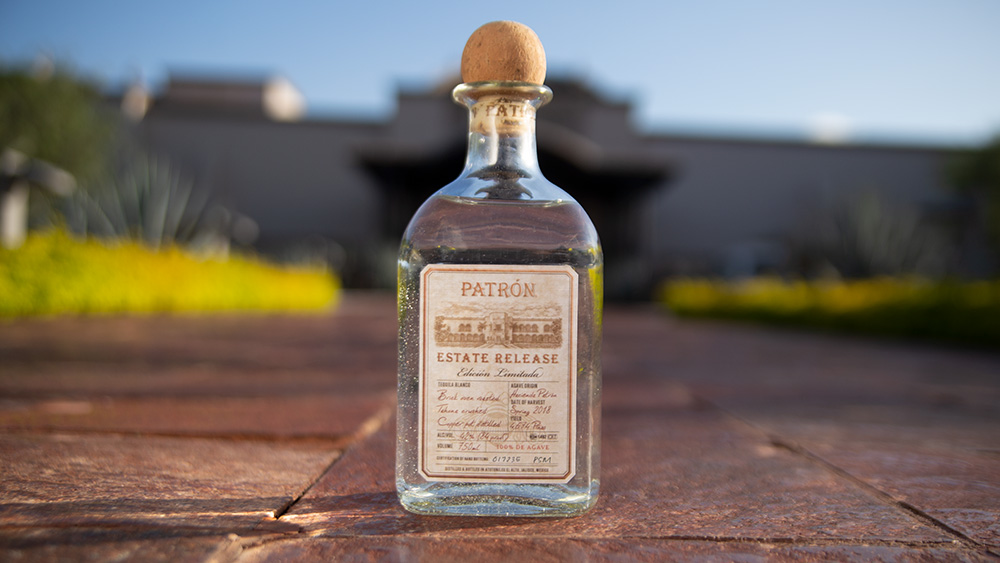 Step out of the Spanish-colonial buildings of Hacienda Patrón in the Mexican village of Atotonilco el Alto, and you walk into a field of blue Weber agaves. Like many other tequila fábricas, however, Patrón usually buys the most mature and healthiest of its highland agaves from neighboring farmers, similar to winemakers who purchase the finest grapes grown by outside suppliers. And, just as “estate wines” are made using only grapes grown in the winery’s vineyards, for the first time Patrón has created a limited-edition bottling of a blanco made from blue Weber agaves that have been grown only on the distillery’s grounds. The Patrón Estate Release has been bottled at 84 proof, an extra push over the 80-proof Silver expression, resulting in more body to capture the sweet agave and fresh grass nuances of this tequila, along with the additional hints of citrus and black pepper, an ideal expression of the hacienda’s unique Mexican terroir. ($100.)