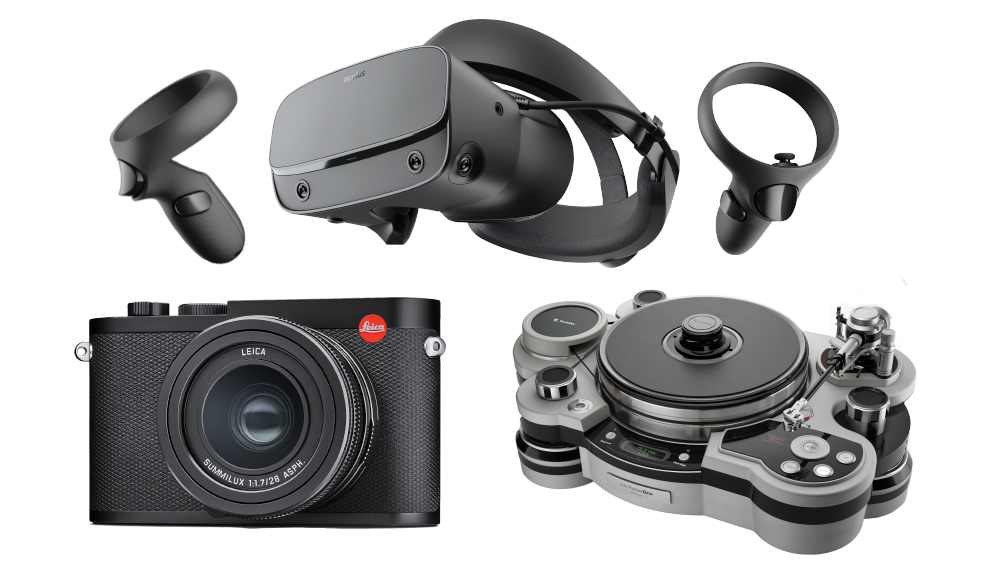 Although not a treatise on innovation, Lewis Carroll’s 19th-century classic Alice’s Adventures in Wonderland works as a prescient analogy for today’s tech. “I know who I was when I got up this morning, but I think I must have been changed several times since then,” says our heroine; a sentiment that just as easily applies to the constantly morphing state of state-of-the-art electronics.

So whether it’s equipment for transcendent sound, a big TV that doubles as art gallery or a small headset to escape reality, it’s been a race just to keep up this year. But the following finds from the worlds of audio, home theater, gaming and gadgets represent the next chapter for their respective categories and leave us grinning like a Cheshire, well, you know.

Like every trip, some musical journeys are more memorable than others, and the new TechDAS Air Force One Premium turntable offers first-class transport into the sonic stratosphere. Designed and manufactured with typical Japanese precision, the $140,000 Premium doesn’t just occupy rare air, it creates it, with novel suspension technology that levitates and rotates the platters—weighing more than 50 pounds combined—on a silent, frictionless cushion of, you guessed it, air. Additionally, an air-vacuum hold-down system sucks the LP to the two-part platter assembly, flattening flimsy LPs in the process.

An outboard motor sits adjacent to the main chassis, spinning the platters via a flat, fabric belt. Two outboard boxes—an air condenser and a pump—huff and puff, inaudibly. Vinyl addicts can equip two tonearms, including those from TechDAS’ American distributor Graham Engineering, designers of the recommended Graham Phantom tonearm ($8,500 to $12,000). The optional Air Force Mounting Rack will become, for some, the altar at which to worship otherworldly sound.

The Frame QLED TV from Samsung  Courtesy of Samsung

Many discriminating consumers despise how TVs tend to dominate their living spaces. For those aesthetes, Samsung introduced the Frame (in 2017) with a screen that, when not in use, projects work from Samsung’s licensed art gallery. So instead of a dead black rectangle sitting center stage, glowing Barry McGee graffiti, photographs by Todd Eberle or family photos can hang on your wall. For 2019, Samsung has enhanced the model with superb QLED technology, which combines a proprietary quantum dot layer with a unique blue LED. This helps create the whitest whites and brightest colors—critical for a high dynamic range image—as well as the widest palette of any 4K screen out there (more than a billion hues versus millions). While OLEDs work best in darkness, Samsung claims its QLEDs greatly outperform the former in any level of light. The Frame (starting at $1,300) is available in sizes up to 65 inches.

My first audition of “Maggies” in 1975 was a transformative listening experience: the tall, thin panels painted a sonic picture that verged on reality and sounded nothing like the boxy things that woofed and tweeted in every dorm room on campus. The new Magnepan 30.7 system delivers world-class performance and represents planar-speaker technology at its most advanced. Four 79-inch-tall panels render music so precisely that live instruments and voices are pinpointed in space, hanging in the air with a sense of depth and substance that’s uncanny.

It’s all attributable to Magnepan’s quasi-ribbon and true ribbon drivers that are nearly massless and move so fast as to be virtually distortion-free. With no conventional cones and no cabinets to resonate, the sound is totally transparent—like the difference between looking through glass or an open window. At $30,000 per pair, the Magnepan 30.7 is high-end audio’s runaway value and merits consideration as one of the finest speakers on the planet.

There are so many options when it comes to cameras that it’s tough to know where to focus. Sure, single-lens reflex (SLR) models will capture the best pics, but who wants to lug around a heavy setup with numerous lenses while on vacation? That’s the space point-and-shoots play in, and simply no one does them better than Leica. The iconic brand’s just-released Q2 features a fixed 28 mm F/1.7 lens with a powerful new 47.3 megapixel low-light sensor. The wide-angle Summilux lens is incredibly crisp, aided by stabilization optimized for hand-held use. You can adjust image clarity manually or autofocus via a 3-inch touchscreen as well as the four-way directional pad in back. And while the $4,995 Q2 won’t zoom, the files are so sharp and large that its “crop modes” can emulate 35 mm, 50 mm and 75 mm lenses. Your cumbersome camera bag will feel abandoned.

Whether one has a watch collection fit for an octopus or a millipede, there comes a time when critical mass demands that order be established. Pinel & Pinel of Paris, whose designer Fred Pinel began with a line of exclusive cigar cases, offers a range of exquisite cabinets, trunks and safes for timepiece collections of every size. Featuring automatic winders, each creation from the Parisian atelier is meticulously executed by a craftsperson skilled in working wood, leather and exotic hides.

Priced at roughly $1.1 million, the bespoke Watch Keeper—in ebony and alligator—displays 160 winders, each with fiber-optic lighting, and includes drawers for an additional 250 watches all enclosed behind a glass façade. Collectors with fewer timepieces will appreciate the Watch Trunk (approximately $35,000), a rolling treasure chest that displays 10 winders and has three drawers accommodating up to two dozen watches.

There is arguably no greater tech wave coming in the next decade than virtual reality, and Oculus plans to be at the crest with its entertainment systems. While the Oculus Quest is conveniently standalone, the company’s new RiftS ($400) plugs into an external PC to unleash its full power. Replacing the original Rift architecture, the Rift S can utilize the full library of games from its predecessor while offering higher resolution, sharper graphics, brighter colors and enhanced optics. Oculus also improved the equipment’s ergonomics, making it lighter, better balanced and more comfortable, with only a single wire to limit clutter. The headset also includes the Passthrough+ feature that allows you to quickly see what’s going on in the real world without having to remove it—helpful when you’re supposed to be watching the kids.