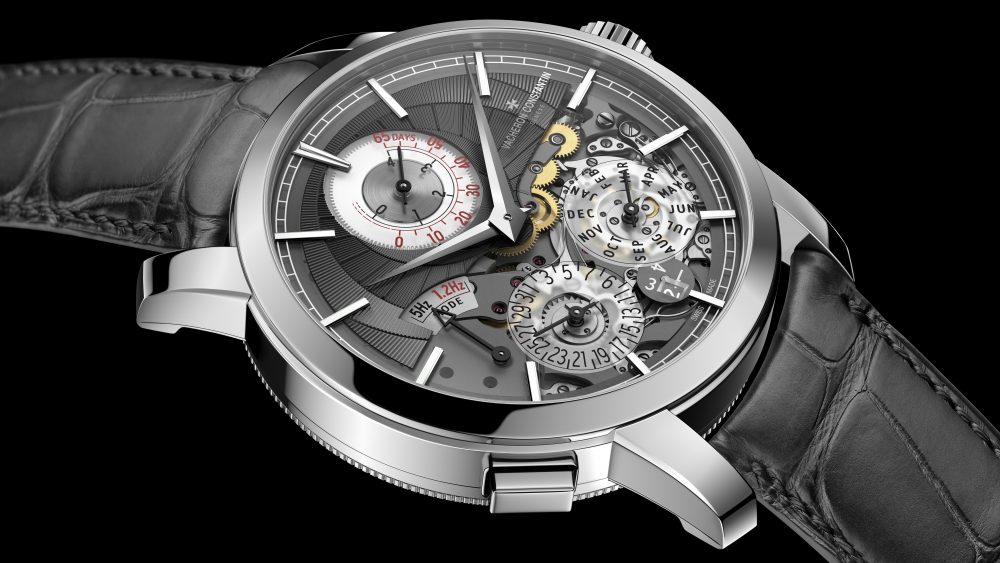 We met with more than 50 of the top luxury watchmakers, as well as countless CEOs, designers, retailers and leading industry insiders throughout the year and at the two biggest watch fairs in Switzerland, the Salon International de la Haute Horlogerie and Baselworld, to compile our list of the watches that are taking the art of timekeeping to its pinnacle. Overall, it was a year marked mostly by controlled perfectionism. Watchmakers kept men’s releases conservative, mostly tweaking existing models in new case materials or dial colors. Only Vacheron Constantin managed to push boundaries with an entirely new solution for the perpetual calendar in the Twin Beat. For women there were very few pieces equipped with serious complications and interesting designs, save for MB&F’s first women’s piece, which rethinks the female watch entirely. Still, a few brands managed to improve upon existing models or expertise with new complication combinations, interesting new materials, innovative design and extraordinary gem-setting.

Of all the timepieces that debuted this year, Vacheron Constantin’s Twin Beat was the only one that could boast a useful new technical invention. The perpetual calendar is one of the most functional complications in watchmaking, for its ability to give the wearer the day, month and year, all while accounting for the cycle of leap years. But unless you are constantly keeping it wound, resetting the components can take so long you may lose track of time altogether. The risk of damaging the complication while resetting it also forces many collectors to have to schedule a date with their watchmaker.

The Twin Beat solves this problem with a dual frequency, operated by two separate gear trains, controlled by a user-friendly single pusher. The wearer can switch between an active (5 Hz) and a standby (1.2 Hz) mode, allowing for a massive power reserve of 65 days. That means if the watch is kept in standby mode, you can leave it flat on the table or in your safe and pick it up two months later with the correct day, year, and month displayed. And if you wear the watch in active mode, you won’t need to wind it for four days.

It’s a lot of watchmaking innovation in 42 mm x 12.33 mm, meaning this watch won’t sit like a hubcap on your wrist. “A good comparison is with cars,” says Christian Selmoni, Vacheron Constantin’s heritage and style director. “If you want to extend the driving range of a traditional internal combustion automobile, you have a few ways to do it: Increase the size of the fuel tank, increase the efficiency of the engine and/or reduce the weight of the vehicle. With this watch, we use the dual frequency in order to extend the power.” ($199,000.)

This year marks the 20th anniversary of Stephen Forsey and Robert Greubel as coworkers and 15 years since the development of their first caliber under their namesake brand. Their new GMT Quadruple Tourbillon, their 25th caliber, honors those milestones by combining two of its most accomplished complications—the GMT and the tourbillon. The watch displays two time zones on seperate dials as well as a universal time function. The 3-D globe gives a reading of the time around the world in one full rotation every 24 hours, following the movement of Earth. This rendering of our planet is flanked by four tourbillons constructed in two pairs, modeled after their first timepiece, the Double Tourbillon 30°. It’s a clever homage to the invention, created by Abraham-Louis Breguet in 1801 to remedy the effects of Earth’s gravity on a timepiece—here the tourbillons gravitate around the earth. ($820,000, limited to 11 in white gold.)

The big news in A. Lange & Söhne’s update to one of its most complicated watches, the Datograph Perpetual Tourbillon, which first debuted in 2016 in platinum, is its highly covetable new salmon dial encased in white gold. The watchmaker, however, is quick to distinguish that unlike other brands who use this dial hue, theirs is made of solid pink gold. But if you’re fishing for bragging rights, the immaculately constructed and hand-finished manufacture calibre L952.2 remains the real showpiece of this watch. No one does discreet luxury to the hilt quite like A. Lange & Söhne and in true austere German fashion, its tourbillon is visible only through its caseback. ($287,800, limited to 100.)

Leave it to a Parisian brand with an aesthetic and heritage developed outside traditional watchmaking to reinvent the moon phase in exceptional proportions. Unlike a traditional example where the moon moves in an aperture on a stationary dial, Hermès’s Arceau L’Heure de la lune features two lacquered hour and minute dials that rotate to eclipse two fixed mother-of-pearl moons. In another twist, the north side of the moon is featured at 6 o’clock while the south side is at 12 o’clock, accented by an ethereal Pegasus by artist Dimitri Rybaltchenko. ($25,500, limited to 100.)

Last year Grand Seiko, the high-end watchmaking division of Seiko, broke off to become its own brand and has been steadily building a cult following among collectors. This year marks the 20th anniversary of its Spring Drive movement. The Japanese watchmaker improved upon the original in the caliber 9R02, with two mainsprings set in parallel within a single barrel; when the timepiece is fully wound, a torque return system uses a percentage of energy from the torque output of the watch to rewind the mainspring, increasing its power reserve to 84 hours. The watch is topped off with a snowflake dial—created by using multiple layers, it is a nod to the snowcapped hills of the Shinshu region where the brand’s Micro Artist Studio is located— with a hand-carved platinum case to match its pattern. It’s proof the brand is establishing itself as a real competitor in the luxury space. ($76,000, limited to 30.)

This is the first non-limited-edition Calatrava watch in steel since the 1970s. That’s a big deal for clients looking for a steel dress watch from the watchmaker outside of its Aquanaut and Nautilus collections. But what makes this model special is its new self-winding, semi-integrated base caliber 26-330 movement, which in addition to its day, date and month indications, also features a weekly calendar. The 53-week indicator accounts for years with an extra week, which happens every five to six years— it’s a function typically useful only
to Swiss watchmakers, but a bonus for the technically obsessed that appreciate Patek Philippe’s history with calendar functions. To top it off, the numerals and lettering on its silvery opaline dial are taken from the handwriting of one of its designers. ($33,454.)

Chopard pulled out all the stops for its first caliber with a flying tourbillon. Highlighting its new complication is an exquisite hand-guilloched honeycomb dial—a nod to the beehive logo originally used by Louis-Ulysse Chopard. The elegant dress watch is chronometer certified and comes with an esteemed Poinçon de Genève certification for its quality and finishing. But as charming as all that is, it’s beyond the dial where the real substance lies. The ultrathin case is made from a single block of 18-karat Fairmined rose gold. Chopard’s pledge in July of last year to use 100 percent ethically mined gold puts them a cut above of the rest. ($118,500, limited to 50.)

Last year Bovet’s Récital 22 Grand Récital took home the top prize at the Grand Prix d’Horlogerie de Genève (the Oscars of watchmaking). That watch came with a sloped-case design modeled after owner Pascal Raffy’s grandfather’s desk—a difficult construction for both the case and the movement. So this year, Bovet upped the ante by challenging that design with a new sloped sapphire crystal case. Machining this material is notoriously difficult—a tedious process amplified by this design, but well worth the effort to show off its patented double-face flying tourbillon from every angle. ($318,600.)

When talking about his first women’s watch, Maximilian Büsser begins the presentation with the disclaimer, “Men don’t understand women,” as though he’s already apologizing for any design shortcomings. He is, after all, known for unconventional men’s timepieces he calls machines, some of which sit like spaceships on the wrist. So why try his hand at designing for women? “I’m surrounded by women in so many ways—my mom, my wife, my two daughters—I wanted to do something that they would be proud of, so I decided to take an enormous risk,” he says.

In his new Legacy Machine FlyingT, Büsser manages to encapsulate all of his technical and creative innovation into just 38.5 mm by 20 mm. Unlike traditional lateral watchmaking, the diamond-crowned flying tourbillon movement is built upward like a tower. It sits beneath a domed sapphire crystal case with the watch face tilted so that only the wearer is able to read its time. Beneath the 3-D architecture is a rotor inspired by the rays of a Louis XIV sun, which winds the automatic watch. Both are tributes to the power of womanhood—symbols of support and life-giving. It looks as though Büsser understands women just fine. ($115,000.)

This year marked a renewed focus on Cartier’s women’s business, and while the company didn’t bring out any new models, it did revamp some of its core timepieces in stunning new iterations. More than half of the brand’s customers are millennials, according to Cartier International CEO Cyrille Vigneron. These young women have serious spending power—and while they aren’t just buying entry-level pieces like the brand’s pervasive Love bracelet, they do want something that is irrefutably Cartier.

The Baignoire (French for “bathtub,” due to its oval shape) was first introduced in 1912, and the elongated or “allongée” version was introduced in London during the swinging ’60s. It may have been around for 107 years, but its appeal is everlasting. This year, Cartier introduced slightly more rock ’n’ roll editions of the Baignoire Allongée and the best versions came topped off, not surprisingly, with some serious rocks. This 18-karat yellow-gold timepiece’s bezel is studded with black spinels decorated like studs rising above a setting of yellow sapphires and diamonds and a dial covered in 473 brilliant-cut diamonds. The timeless piece has just enough edge to appeal to women across generations. ($74,000, limited to 50.)

When Graff introduced jewelry inspired by the 20th-century artist Cy Twombly, it felt like the brand was working with a new canvas. The calligraphic swirls of Twombly’s large-scale paintings took on the form of tiny modernist sculptures when miniaturized into diamond bijoux. This year, Graff added a jewelry watch to the collection whose vine-like, seamless loops of diamonds bring to life Twombly’s legendary Bacchus series for the wrist. The effect is an intoxicating concoction of 244 carats of individually selected and custom-cut round, pavé and baguette diamonds. ($180,000.)

When Patek Philippe introduced an entire new Twenty~4 women’s collection with an automatic instead of a quartz movement last year, it felt like the kind of everyday bracelet watch that was missing from the watchmaker’s lineup for ladies. This year they dressed up the Twenty~4 in rose gold with 3,238 random-set Top Wesselton pure diamonds for a total of 17.21 carats. Its snow setting requires meticulous work from a gem-setter to ensure that no surface of this watch, save for the edges, went unfrosted. The effect is a watch that is both wildly opulent and surprisingly casual all at once—for a woman who is both well-heeled and well-sneakered. ($385,568.)