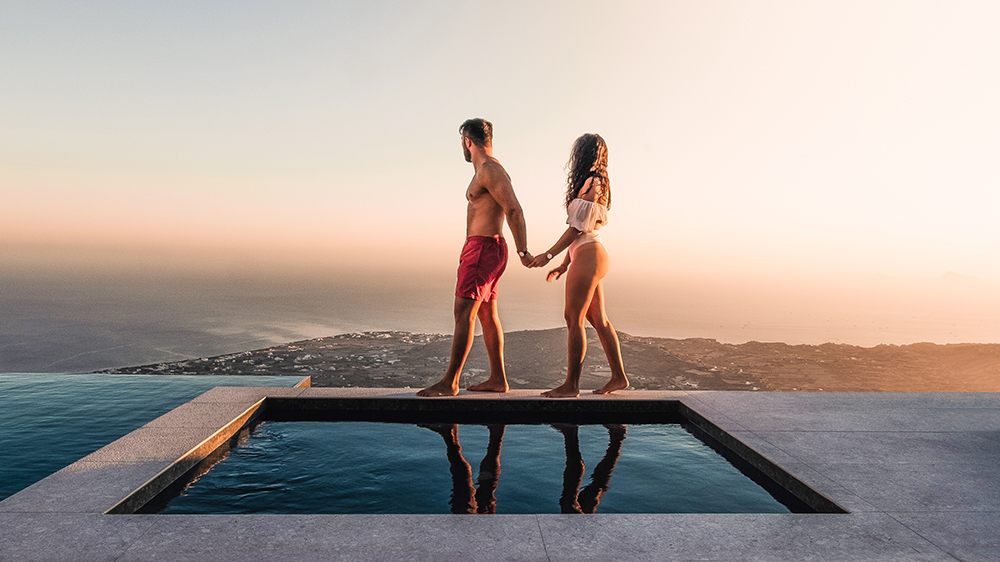 For summer 2021 in Greece, party like it’s 1976. The country is celebrating its own independence bicentennial, a mood-improver only boosted by the infusion of excited international tourists from nations that include the USA, welcomed in April with Covid protocols in place. Greece has been prepping for this moment for the last year: Hotels like the storied Grande Bretagne in Athens have reopened with significant overhauls; the new alfresco lounge in the inner garden there will be a buzzy spot. New hotels have popped up all over the islands, too, with three notable standouts.

It might look like an old Mykonian village, on the top of a hill on the southwest of the island above Ornos Bay, but the whitewashed stone buildings here are an ultra-luxury retreat owned and operated by a group that runs several of the hottest restaurants in Athens. The brick oven is a throwback touch (expect the daylong smell of fresh-baked horiatiko psomi, or village-style bread), while there’s a canny, only-in-Mykonos concierge, dedicated to directing guests to the best beaches depending on how the island’s notorious winds are blowing on any given day. Doubles from about $1,450

Architect Vassilis Zorzos grew up on Santorini and so drew inspiration for these aeries from deep below the earth: i.e., the yposkafa, the cave houses hewn out of the rocky cliffs here. This six-villa hotel is perched on the highest point of the island—hence the name—2,000 feet above the water. The 1,345-square-foot, raw-concrete rooms are engineered to maximize the astonishing views with almost floor-to-ceiling windows and private, plunge-pool-equipped terraces that jut up to the edge of the mountain. Doubles from about $350

This Bauhaus-inflected property on Crete’s northeast coast, originally designed by an acolyte of Walter Gropius in the 1980s, is a charming surprise among Crete’s often uninspired hotel assortment. It has just been reimagined by Greek architect Vana Pernari as a boho-chic, family-friendly resort: Think oversize macramé chandeliers, chestnut-wood daybeds and ceramics by LRNCE. The hotel’s huge garden houses two pools as well as its own Cat Café, a nod to the felines that roam the island; here, guests can feed the resort’s own domesticated pack. Bungalows from about $195