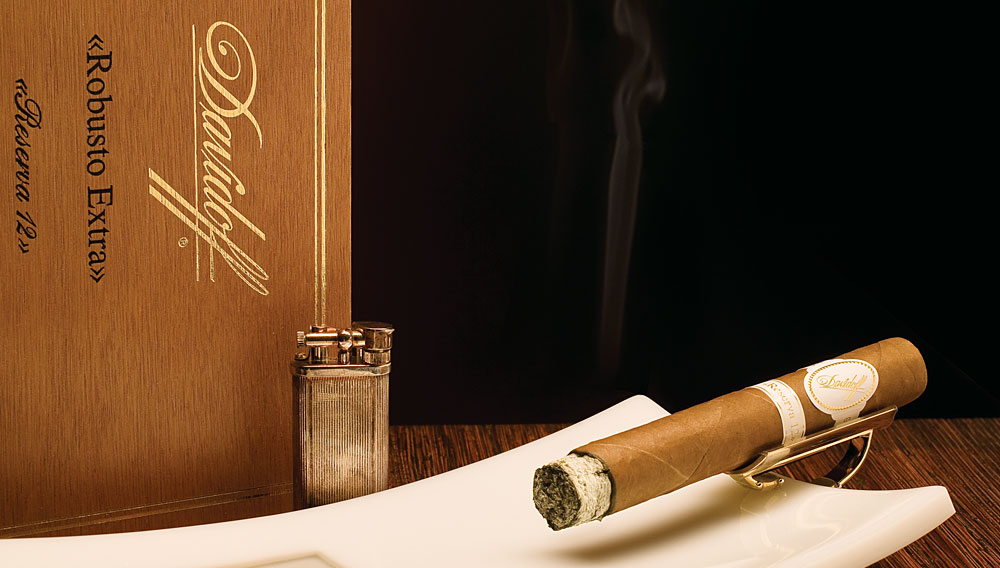 Strength is a relative term, but few (if any) of the very best cigars currently in production would qualify as ultramild. The trend toward greater intensity is not a marketing gimmick, but rather a direct reflection of the tastes of our times. As cigar smokers continue to demand fuller, more concentrated flavor, fine cigar makers are rising to the challenge—and none does so more enthusiastically than Davidoff. Throughout its history, the premium brand has stayed true to the exacting standards and ideals of its founder, Zino Davidoff, who once wrote, “A wisely chosen cigar, to me, is like a weapon against certain of life’s torments; in some mysterious way, a little blue smoke chases them away.”

Those wise connoisseurs who select Davidoff’s 2008 limited-edition Reserva 12 will be amply armed against the gravest of life’s vicissitudes. This smooth yet potent cigar contains rare, specially cultivated tobaccos, some of which have been aged, much like a fine wine, for as many as 12 years (hence the number in its name) to develop their mellow taste and depth. The use of five different tobaccos in the filler blend, rather than the usual three or four, further enhances this pleasing complexity: Davidoff’s Reserva 12 combines San Vicente ligero, Piloto seco, Jalapa Especial ligero, Corojo/Olor ligero, and Corojo ligero, whose exquisitely orchestrated flavors are augmented by a Dominican Olor binder. The unprecedented addition to the blend of four different ligero leaves (the most pungent on the tobacco plant) provides a bracing counterpoint to the silky softness of Davidoff’s specially cultivated Ecuadoran wrapper.

This 5½ x 52 robusto offers a smoking experience characterized by a strong but gentle herbal spiciness, with a bouquet of sweet green tea that has been allowed to steep. The well-constructed Reserva 12 draws smoothly and easily, maintaining an even taste until it burns down to its white-and-gold double bands. Available in 10-count cedar boxes ($185 per box), the Davidoff Reserva 12 is indeed a dulcet defense against life’s effronteries—the wisest choice for the worst and best of times.