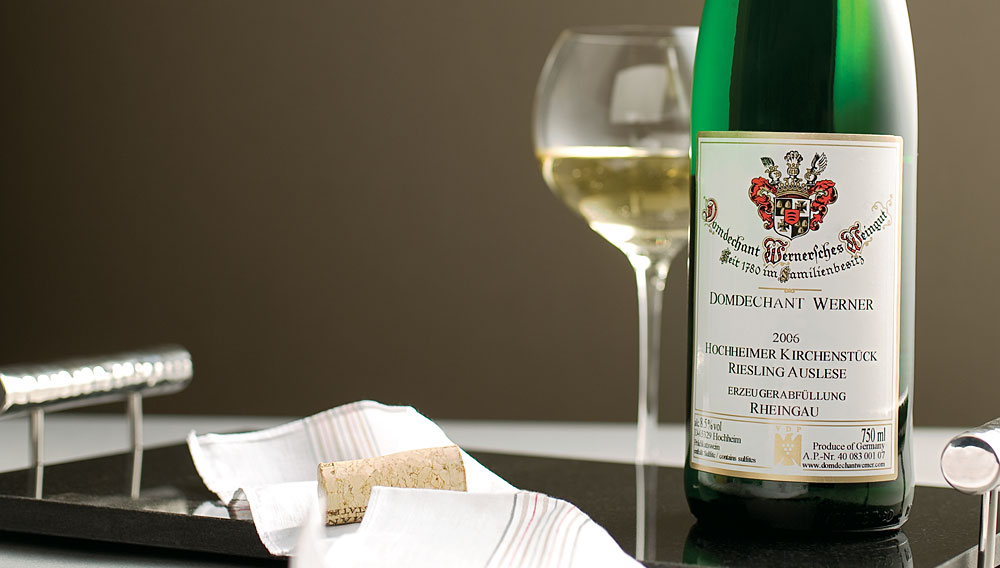 Hochheim is located on the Main River in the Rheingau wine region, considered the spiritual home of Riesling. In fact, one of the first written references to this prestigious grape is dated 1435, at a site not far from Hochheim: The cellar log of Count Katzenelnbogen at Rüsselsheim records that, on March 13, one Klaus Kleinfish purchased six Riesling vines from the count’s vineyards.

While this entry suggests the opening line of a chapter from the Brothers Grimm, unlike those bleak tales, this story has proved to be a happy one—at least for wine lovers around the world who have enjoyed the great and varied expressions of German Riesling. Some of the greatest of these have come from Domdechant Werner, a seventh-generation estate now run by Dr. Franz Werner Michel and his family. The Werners originally acquired the estate in 1780 from a local nobleman, Count York, and named it after Dr. Franz Werner, who was dean (Dechant) of the cathedral (Dom) in the nearby city of Mainz.

The estate has holdings in several top sites along the river in Hochheim, with ideal south-facing orientation and mineral-rich soils. Riesling is by far the leading varietal at Domdechant Werner, but a small bit of Spätburgunder (Pinot Noir) is also planted.

Kirchenstück is an Erstes Gewächs (first growth) vineyard, one of six in which Domdechant Werner has vines. This designation is only bestowed by the German government after rigorous quality testing. The Auslese ($58) from this vineyard explodes out of the glass with effusive flavors that include creamy vanilla and juicy peach. Long, intense, and exquisite, this wine makes a convincing argument for declaring Riesling, rather than Chardonnay, the world’s greatest white grape varietal.