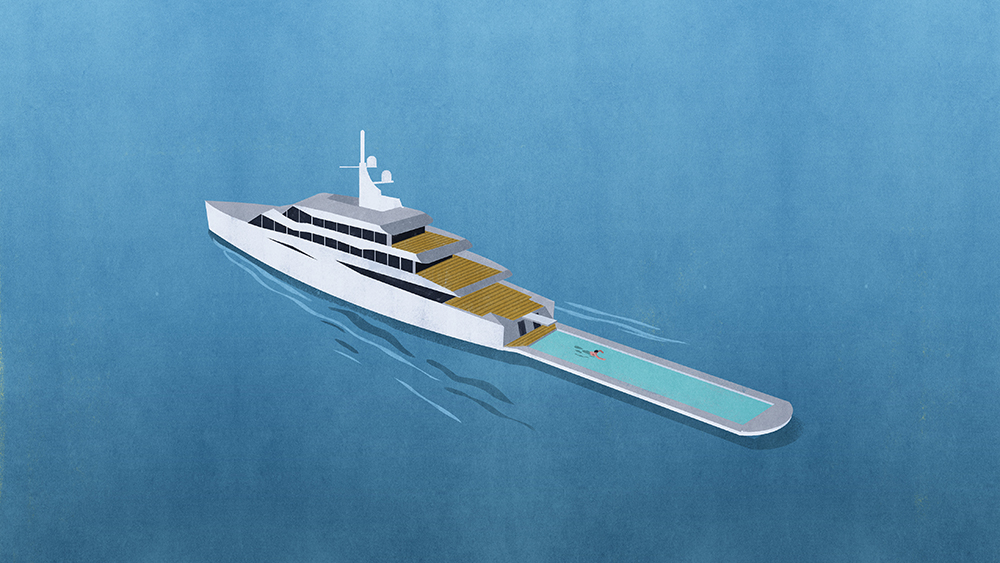 The beach club became mainstream on yachts around 20 years ago, when designers realized that the lowly tender garage would make a nice oceanside cabana instead. Beach clubs have since evolved into far more sophisticated spaces, thanks to open-hull sides and deeper enclaves, with gyms, spas, bars and, on larger yachts, even dive centers.

That desire for more private ocean access has moved beyond supersizing beach clubs to actually reshaping the stern. “There’s been a slow burn of bringing the inside out,” says J. David Weiss, an American designer who has created superyachts for Heesen, CRN and other builders. “The desire for access at the stern is important to owners, who want both openness and privacy.”

Weiss recalls designing what was initially a small pool inside the beach club of the 240-foot Yalla, from CRN. Then, he says, “the owner wanted it as a significant destination, so it kept growing. It eventually lengthened the boat by more than 30 feet.”

Rebeca, the first of Benetti’s Oasis 40M series, actually reduced interior space in order to apportion more real estate to the stern; its 900-square-foot open transom includes an infinity pool and rear “transformer” steps that lower into the water, with the opening sides adding at least another 10 feet to the 28-foot beam. Owner Tim Ciasulli discovered other benefits as well. “On most boats, you can’t sit at the stern because of spray or engine exhaust,” he says, but on Rebeca “you sit at water level but facing backward. The speeds are slow enough to let you really see the ocean—it’s like riding a big surfboard.”

Weiss believes the trend will only accelerate. “I’m working on a 223-foot project, and one of the most significant things the owners want is to expand the beach club,” he says. “There’s a huge appetite now for origami-like structures folding out of the superstructure.”