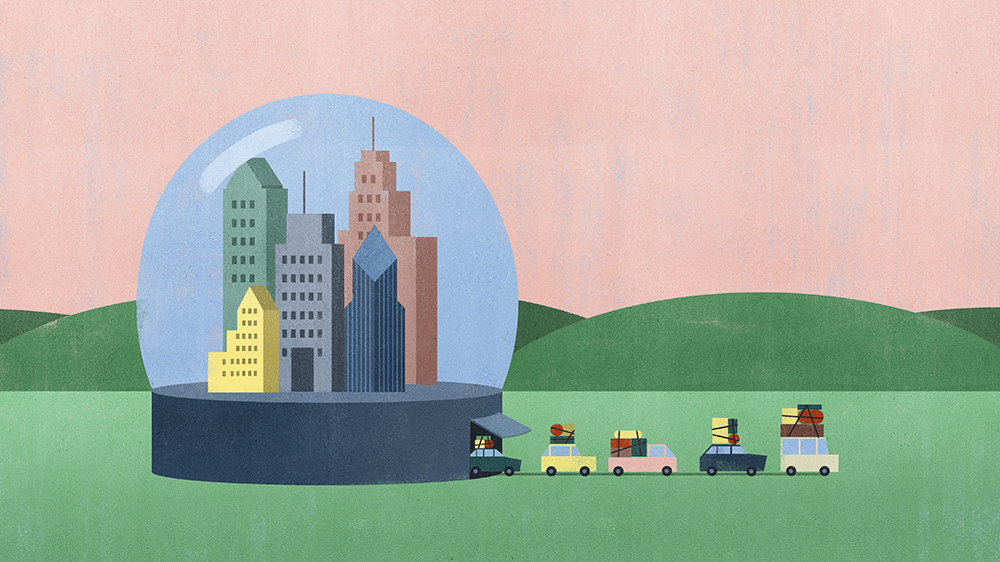 The Big Idea: The Urban Exodus

City dwellers experienced a once-in-a-generation collective primal urge last year: escape. Like Roman aristocrats and wealthy Londoners during plague pandemics of yore, many of us chose to head for the healthful air of the countryside.

Those who lacked a well-appointed bolt-hole urged their brokers to acquire one pronto, sparking bidding wars in spacious suburbs and resort towns such as the Hamptons. Sales of South Fork homes priced at more than $2 million rose 156 percent in the last quarter of 2020 compared to the previous year, while one village, Quogue, saw an increase of 388 percent, according to Corcoran. Some ex-urbanites have enrolled children in local schools and plan to stay put indefinitely. Snowbirds who used to migrate annually to Florida hot spots such as Boca Raton are now feathering permanent nests there.

As with the switch to digital working, Covid-19 accelerated a pre-existing trend. Coldwell Banker reported inventory in Los Angeles has outpaced sales for several years now, thanks to the desire for lower tax burdens offered by states such as Texas, Nevada, Arizona, Washington and Colorado. Sales in Aspen duly jumped 103 percent in 2020.

The same held true in San Francisco, where one realtor says, “The exodus is unlike anything I’ve seen in my 28 years of selling San Francisco real estate… with affluent residents just feeling it was time for a new life outside the city.” Bay Area fugitives left for low-tax states or holed up in Napa and Lake Tahoe.

And what did we buy? Compounds: sprawling estates that can house the extended family, with room for a full complement of staff, a suite of home offices, on-site learning pods and extensive leisure amenities. While a Peloton bike and a firepit might have cut it in 2019, this last year contractors installed wellness complexes, meditation chambers and infinity pools.

Extreme versions of the same impulse for sumptuous seclusion drove a spike in demand for private islands and second passports. Real-estate investment is a path to citizenship in Caribbean countries such as Dominica and Grenada and EU member states such as Malta. One immigration lawyer noted there had even been a rush on third and fourth passports, saying, “In the face of risk, families are diversifying their… nationalities, not unlike how investors diversify their portfolios.”

This new primacy of the rural retreat may reflect permanent priority shifts. According to one broker, “I don’t think anyone from this generation will want to risk finding themselves without an escape.”