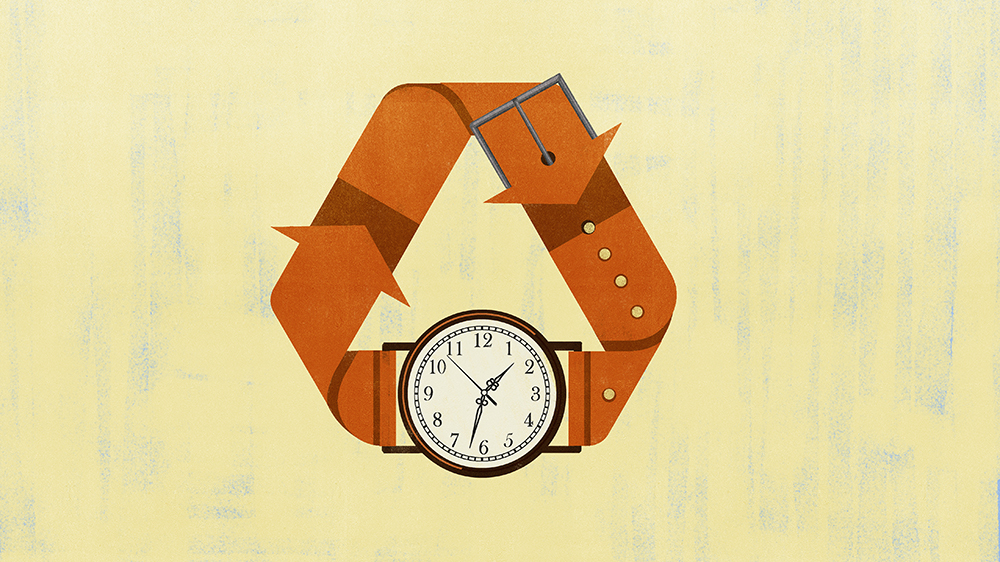 The Swiss watch industry has, traditionally, not been quick to adopt modern ideas. Even e-commerce is a relatively new development for some brands. It’s been even slower to embrace sustainability efforts. In fairness, this is an industry that prides itself on building a product that can (often) last, with servicing or restoration, for many decades—in some cases even centuries. But with younger generations demanding the brands they patronize place increasing focus, and resources, on environmental efforts, watchmakers are finally tuning in to the cause.

In the last three years, early tangible efforts were mostly relegated to straps. In 2018, Breitling partnered with surfer Kelly Slater on a line of Superocean dive watches outfitted with straps made from Econyl, constructed from discarded fishing nets and other repurposed nylons. They’re now available for all Breitling models. In 2020, it introduced watch boxes made from upcycled PET plastic bottles and got rid of authenticity papers in favor of digital records. The company predicts its foldable box will also reduce transport-related CO2 emissions by over 60 percent.

Companies are also looking to expand the life span of their products. For its new Tank Must, which goes on sale this September, Cartier introduced vegan straps, which are composed of around 40 percent plant matter and produced using waste from apples grown for the food industry in Switzerland, Germany and Italy. The timepiece also comes equipped with the brand’s first solar-powered watch movement. “We wanted to work on something that would be an interesting innovation, but also increase the durability of the product and reduce its carbon footprint,” says CEO Cyrille Vigneron. The light is absorbed through openings in the Roman numerals, and it can run for up to 16 years without additional maintenance.

But making the watch itself from recycled materials has proven to be much more challenging. In the luxury sector, only Ulysse Nardin and Panerai have proposed watches with recycled elements beyond the strap. Last November, Ulysse Nardin debuted the Diver Net, which includes an inverted uni-directional bezel and parts of the case constructed from discarded plastic fishing-net material. It won’t go into production but is being used as a blueprint for future sustainable practices. Panerai’s new Ecologico Submersible eLab-ID has gone a step further, producing a watch made from 98.6 percent recycled material. Unveiled this year, it will go into production in 2022.

Better yet, the almost entirely recycled watch won’t be a one-hit wonder. Panerai has opened the doors on the process to reveal each one of its suppliers. It has developed a supply chain dedicated to the production of the components in the hopes that the whole industry will come calling. It’s a bear of an endeavor and, one hopes, a game changer.