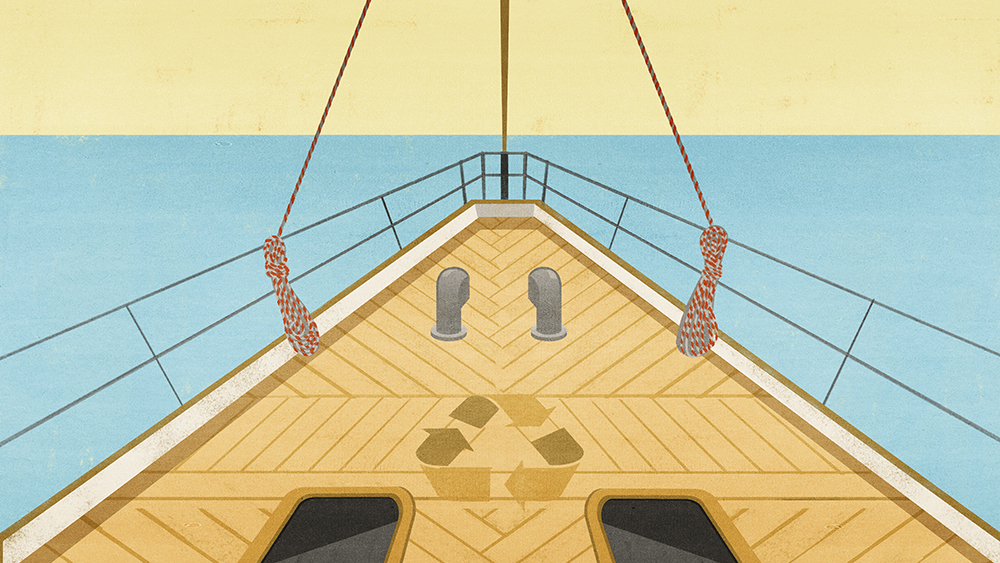 Sustainability and the luxury world are not always easy bedfellows. And the disconnect between the two is particularly obvious within the marine realm, where many owners preach eco-everything until it comes to the rare woods and exotic stones that differentiate their vessels. “Everyone talks about the greater good,” says veteran yacht designer Greg Marshall. “But the difference is these people have money to buy whatever they want—and their yacht is a statement of the pinnacle of their lives.”

Probably the most striking example these days is teak, which is limited due to sanctions on Myanmar, where the best trees are found. “Burmese teak is more beautiful on decks than any other wood—plus it stays cool in the sun and feels good on the feet,” says Tankoa CEO Vincenzo Poerio. “Owners see it as the epitome of classic luxury.”

Synthetic teak is available, but though sustainable, performance isn’t there yet—it can be much hotter underfoot than real teak, for example. These new synthetics are better for smaller boats, says Poerio, or in areas like the beach club, where spills can’t stain the material. More sustainable woods such as cork and yellow cedar are utilized but don’t yet have the same status.

Marshall used a sustainable decking material made from smashed granite on his design Big Fish, which has cruised 450,000 miles in 12 years. The decking, which feels like walking on sand, has been resealed twice in that period. If it had been made from teak, it would have had to have been replaced two or three times. “It’s sustainable and performs well, but our market doesn’t want it,” he says. “They want teak.”

The good news is that composite teak—teak waste fibers infused with resin—has the same visual appeal and performance as the harvested wood. It provides the sustainability that is not attainable with the real thing. Marshall believes it will be more widely used in years to come.

Westport’s Sylvia Bolton has also seen engineered woods migrating into yacht interiors. They have the same look as wood planks but offer greater longevity. “They’re developed for high-end hospitality, which have stringent rules against flammability, making them ideal for yachts,” says Bolton.

The designers are witnessing the slow-but-gradual adoption of sustainable materials, but the battle has much to do with market perception. Marshall is looking at mushroom-based leathers that he describes as “excellent,” while Poerio has witnessed advances in faux marble that could potentially compete with natural Carrara, so long as it’s given a chance to take hold with clients.

“We need to change the idea that luxury means only natural wood or marble,” says Poerio. “Once the quality is there and scales of efficiency drive the costs down, it will be a matter of marketing.”