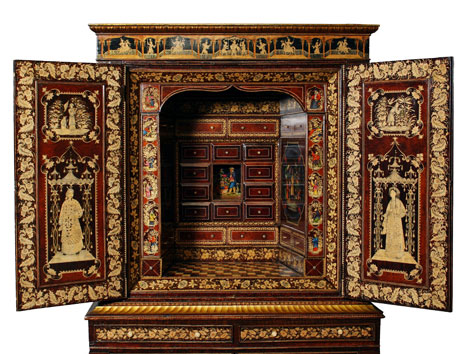 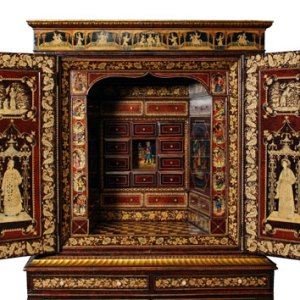 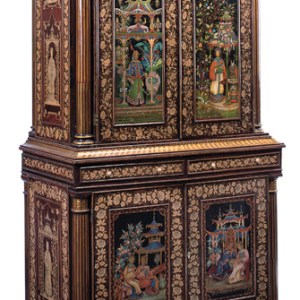 When evaluating an object for acquisition, the antiquarians at Kentshire Galleries want to feel true love rather than mere lust. “In a shop or at an auction viewing, as we look at piece after piece, suddenly our eyes zoom in on one,” says Robert Israel, who, with his brother-in-law Fredric Imberman, runs the 69-year-old family-owned company. “In a flutter of time, we register the piece’s overall impact and rate its elements.”

Periods of quick yet studious contemplation came at a furious pace this past year in Kentshire’s loftlike 1880s building in New York’s Greenwich Village and in the company’s smaller uptown space on Madison Avenue. Kentshire, which specializes in English furniture and accessories from the 17th century through the early 19th century, recently acquired an 18th-century, white-painted breakfront. This bookcase—priced at $750,000 and inspired by Thomas Chippendale’s designs published in the 1754 journal Director—is full of the rococo, chinoiserie, and Gothic flights of fancy that were de rigueur at the time. But third-generation Kentshire family member Matthew Imberman, Fredric’s 30-year-old son, says, “The cabinetmaker’s execution of these motifs—especially in the extravagant glazing bars, masterpieces of flora and fauna design—is far more exuberant and whimsical, making us believe that the cabinetmakers were Richard Wright and Edward Elwick of Yorkshire.”

In terms of pedigreed provenance, the prize goes to a $475,000 ormolu-and-cast-iron center table from 1831 that features a specimen-marble top by Italian artist Giacomo Raffaelli (a favorite of Napoléon) and a base crafted in Scotland after a design by Percier and Fontaine. The piece was commissioned by Lord John and Lady Augusta Kennedy-Erskine, who was an illegitimate daughter of the United Kingdom’s last Hanoverian king, William IV. “This is probably the most important hard-stone-inlay table we’ve had the pleasure of owning,” says Imberman. He notes its detailed documentation, which includes an original handwritten catalog citing the table’s commission, along with a diagram and a list of the types of stone used.

For the “pinnacle of the English fascination with all things Chinese,” says Imberman, look no further than a $650,000 penwork cabinet from 1820 that would seem to exist simply to be beautiful. “It’s like a Wunderkammer—its main purpose is to delight the owner. This piece, with Chinese, Indian, Mongolian, and Persian motifs, stands sublimely on its own.” Imberman says that painted furniture represents another level of extravagance in the world of antiques. “We’re used to seeing marquetry, but the fashion for painted furniture at that time was just as pronounced,” he says. “It is simply rarer today because it was so fragile.”