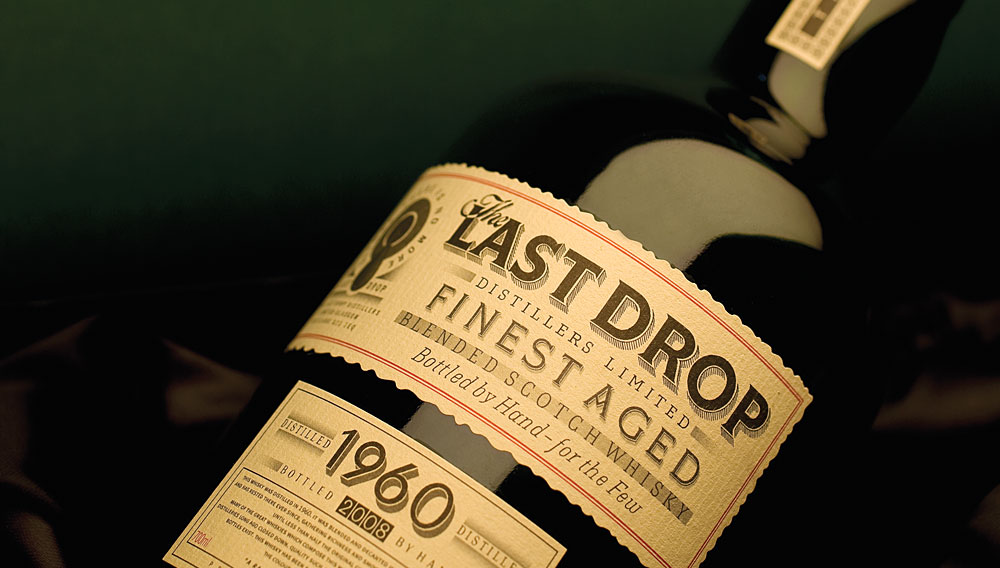 The pleasure of connoisseurship lies largely in discovery. For the spirits aficionado, the search often leads down crooked paths: through agave-filled deserts for tequila; over countryside strewn with medieval ruins for Cognac; and across humid, tropical islands for rum. In the case of the three adventurers behind the Last Drop ($2,000), the quest for great whisky led them through the heather-scented byways of the Caledonian moors to some of Scotland’s remotest cellars. There, in 2008, in the old dunnage warehouse of the Auchentoshan distillery, the trio—Tom Jago, James Espey, and Peter Fleck, who collectively have more than 120 years of experience creating and marketing such brands as Chivas Regal and Malibu—found three hidden casks of aged blended Scotch whisky. “When I first picked up the sample, I was amazed by the youthful freshness of the nose and taste,” recalls Jago. “I didn’t know then that it was almost 50 years old.”

The dark-amber spirit has remained surprisingly fresh and generous, and it exhibits amazing depth and a near-perfect texture of fine silk. These qualities, Jago says, pay tribute to the unknown man who put together the original 1960 blend, which was vatted and put into new sherry casks when the component whiskies were a minimum of 12 years old. Many of the distilleries from which the whiskies originally came have long since ceased to exist, but it is believed that spirits from Millburn, near Inverness, as well as spirits from distilleries on Scotland’s peat-rich outer islands, are among the 70 malt whiskies and 12 grain whiskies that the blend contains. Over several decades, evaporation—or, in cellar parlance, “the angels’ share”—claimed 75 percent of the blend, which accounts for a minute release of just 1,347 bottles worldwide. Bottled at cask strength (104 proof) with no chilling, filtering, or coloration, this trophy whisky exhibits lush aromas of toast, plum, prune, bittersweet chocolate, sherry wood, dark molasses, soft herbs, and dried fruits. Its exceptionally long finish satisfies to the very last drop.