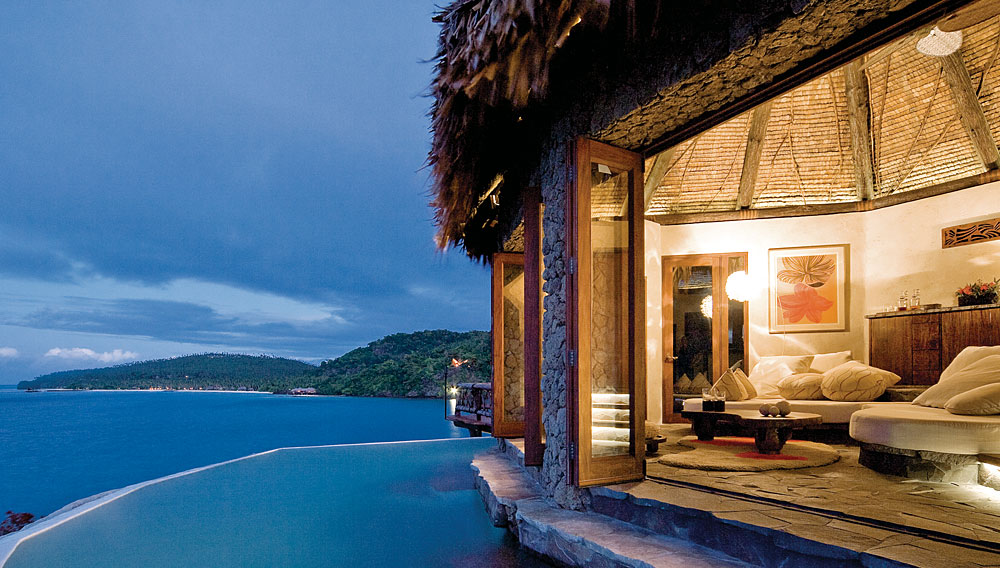 In the cerulean waters of northern Fiji’s far-flung Vanua Levu, a lush and undulant island formerly belonging to the late publishing magnate Malcolm Forbes has been converted into one of the world’s most exclusive refuges. Laucala Island—a 25-villa resort set on a nearly 3,000-acre private isle—is the brainchild of the reclusive Austrian energy-drink tycoon Dietrich Mateschitz, who purchased this onetime coconut plantation for a reported $10 million in 2002 and has spent the last three years turning it into a retreat unlike any other.

Access to Laucala Island, which opened to guests in December 2008, requires submitting an application. Most visitors arrive in private aircraft (frequently the resort’s seven-seat Beechcraft King Air turboprop), which touch down on the third-largest runway in the country. Laucala is also accessible via yacht, though skippers must navigate past the 18-mile-long, horseshoe-shaped coral reef that protects this mountainous landmass.

Once ashore, visitors reside in one of Laucala’s thatch bungalows, or bures. The conical-roofed accommodations—each with its own pool, indoor and outdoor showers, and outsize stone or wooden baths—are scattered along sugar-sand beaches, against volcanic cliffs, and elsewhere throughout the island’s southern shore. Interiors are upscale Fijian in style, with natural fabrics, fixtures, and furnishings that London-based designer Lynne Hunt sourced from throughout the islands. A similar ambience is prevalent in the public spaces, where whimsical finishes include the decorative and functional use of magimag, a traditional woven cord fashioned from coconut husks.

Though abounding with extravagant amenities—a hilltop spa, a golf course designed by Scotsman David McLay Kidd, an equestrian center, five restaurants, a fleet of 14 boats to explore the reef, and a vast man-made lagoon of terraced pools strewn with boulders and complemented by an 82-foot-long glass-cube lap pool—Laucala derives much of its allure from its restraint. “The resort covers less than 15 percent of the island,” says managing director Thomas Kilgore, whose friendly, mostly Fijian staff will arrange private picnics or equine trots on Laucala’s most isolated beaches.

Privacy, of course, is never a concern on Laucala Island. By virtue of its paradisiacal milieu—and a fervently guarded, radar-laden perimeter—the resort is well positioned to become the ultimate South Seas hideaway. ($3,800–$35,000)