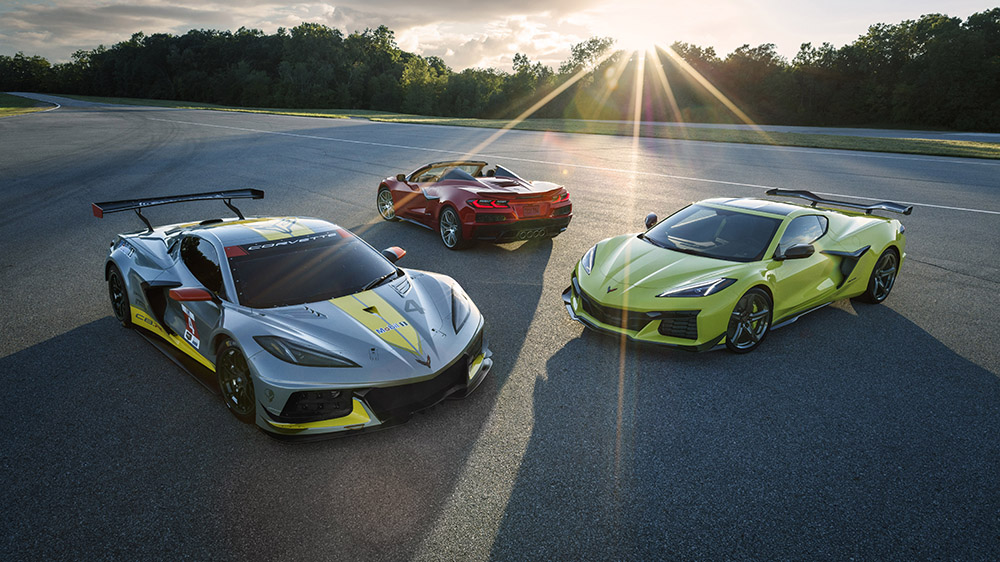 There’s perhaps no car as American as the Chevrolet Corvette. Despite this, the Detroit auto giant decided to really shake things up and turn to Europe for inspiration when developing the eighth iteration of its most famous nameplate. The latest version of the iconic sports car doesn’t just have a bold new design; it’s also the first to feature a mid-engine layout. The radical move made waves when it was announced back in the summer of 2019, exciting much of the vehicle’s diehard fanbase, while horrifying more than a handful of purists at the same time.

Three years on and it’s safe to say Chevy’s audacious bet has paid off. The C8 Corvette has proven to be a massive hit with the automotive press and buyers. In fact, the only real problem with the car is how hard it can be to actually buy. The past three years have been riddled with just about every kind of production delay imaginable, including strikes, shutdowns caused by the coronavirus pandemic, supply chain issues and even a tornado destroying 120 just-built examples. With the car’s fourth model year about to go into production, Chevy is hoping for an easier road ahead. Regardless, demand for the C8 is unlikely to wane anytime soon. Here’s everything you need to know about the coveted sports car.

Any discussion about the C8 Corvette can only begin in one place: the engine. After 67 years of commitment to a front-engine configuration for the Corvette, Chevrolet decided to kick off the new decade by repositioning the car’s powerhouse behind the driver and passenger seats. And this isn’t just any old engine—it’s a brand-new, naturally aspirated 6.2-liter LT2 V-8.

While that base motor, which is mated to an 8-speed dual-clutch automatic transmission, isn’t all that different from the one featured in the C7, it is more powerful, bringing a solid 490 hp of grunt and 465 ft lbs of torque. The new power train enables the car to rocket from zero to 60 mph in less than three seconds. The C8 can also complete the quarter-mile in just over 11 seconds and reach a top speed of 184 mph. And if that’s not enough for you, a Z51 performance package will boost the horsepower and torque figures to 495 hp and 470 ft lbs, respectively, giving all other performance numbers a lift as well. One thing to note: There is only one transmission option, something that has caused consternation among the faithful.

To help manage all that power, the C8 Corvette has a Driver Mode Selector that allows you to pick from six driving modes, including Tour, Sport, Track, Weather, MyMode and Z Mode (the latter two of which are customizable). It’s also equipped with a four-wheel anti-lock brake system, with disc brakes and four-piston calipers on each wheel. The Z51 package also includes an electronic limited-slip differential, new final drive ratio, improved cooling system for the brakes, an enhanced suspension and a performance exhaust.

The C8 Exterior: A Bold Departure

Like any other vehicle, the Corvette as seen its shape and design shift since it was introduced in 1953. But from generation to generation, no design overhaul has been as jarring as the C8’s. For that last 25 years or so—about the time the C5 debuted in the mid ’90s—we’ve been able to see the previous generation of ‘Vettes within the new iteration’s design. That stops with the C8.

Chevrolet used the change in layout as a chance to alter the ‘Vette’s profile, discarding some of its trademark features. Gone is the long, signature nose and slightly squared-off back. The front still comes to a peak, but the rest of the lines and angles are sharper and the cockpit has been moved forward. That shift rids the car of the slinky elegance that’s been a part of its shape since the ’60s but gives its a new boldness. This is a vehicle designed for speed, and it looks like it. The new design, which is available as both a coupe and convertible, gives the American vehicle a decidedly more European aesthetic.

Inside the C8 Corvette  Chevrolet

It’s not just the exterior that’s been given a makeover. Open up the C8 Corvette’s interior and you’ll find a cabin that actually looks like the cockpit of a futuristic fighter jet. Sit down in the low-slung driver seat and you’re met with a rectangular steering wheel, which includes two large paddle shifters. Behind that is a 12-inch digital instrument cluster, which includes a new tachometer, to help keep track of your ‘Vette and its performance as you drive.

Embedded into the center console is an 8-inch infotainment screen that’s angled toward the driver. It’s equipped with Chevy’s Infotainment 3 Plus system, which features Bluetooth connectivity, a 4G mobile hotspot and both Apple CarPlay and Android Auto compatibility. The C8 Corvette’s interior is also equipped with a high-performance, 14-speaker Bose audio system that is sure to be music to any audiophile’s ears.

You’ll also have three different styles of bucket seats to choose from, as well as a variety of color and material options, including Napa leather and suede microfiber. And for those worried about cargo space, the C8 offers a front compartment and rear trunk that still has room for two sets of golf clubs.

Like anyone else interested in high-performance vehicles, we were excited to get behind the wheel of the 2020 C8 Corvette. But that test-drive through Nevada made one thing abundantly clear: While definitely a step in the right direction—and an incredible vehicle for its price—the new C8 wasn’t fully ready to shine. This is a car, after all, that wants to be mentioned in the same breath as Lamborghinis and McLarens, but it simply didn’t feel fully refined yet. From our “First Drive” write-up:

“The new ‘Vette is a remarkable achievement for something starting under $60,000, but it’ll be a while before the C8 matures into the outstanding machine I’m confident it can be. Maybe that machine is the forthcoming Stingray convertible. Maybe it’s an eventual higher-powered Corvette variant. Either way, I feel the magic looming.”

Of course, it’s important to remember that the 2020 model was the very first installment of the C8. On average, different ‘Vette generations have managed to stick around for more than eight years. That gives the brand some time to improve the car—and find that magic.

As the C8 goes into its fourth year of production, its athletic design and powerful V-8 remain unchanged. There are new exterior and interior options available for the upcoming 2023 model year, though. These include three new 20-spoke wheel styles (gloss black, matte black with a red stripe and “ultra-bright machined”), as well as the possibility of black tail pipes for the performance exhaust package. There are also two new trim packages for the cabin, Stealth Aluminum and Adrenaline Red.

There’s still more to look forward to: Since the C8 was announced back in the summer of 2019, enthusiasts have wondered when its first high-performance variant would arrive. The time is now, as the 2023 model year will see the debut of the C8 Z06.

The High-Performance Z06 Is Finally Here

New add-ons are exciting and all, but the 2023 model year change that enthusiasts are really looking forward to is the introduction of the high-performance C8—the Z06.

Chevy finally confirmed last summer that the eighth-generation Corvette was getting the Z06 treatment. The biggest difference between the new variant and other C8s is its all-new, naturally aspirated 5.5-liter DOHC V-8 with a flat-plane crank dubbed the LT6. The sonorous mill is similar to the one found in the C8.R race car, and is mated to an 8-speed dual-clutch automatic transmission that sends power to the rear axle. It spits out a hair-raising 670 horses and 460 ft lbs of twist and has a redline of 8,600 rpm. That’s 180 more horses than the Stingray and only a hair less torque. The final performance figures have yet to be revealed as of writing, but you can expect the car to be fun and loud. It could get more powerful, too. Chevy has also announced plans to release a track-only version, called the Z06 GT3 race car, in 2024.

A new powerplant isn’t the only change to the Z06. The car is also 3.6 inches wider and features a much more intense aero package. Modifications include a new front fascia with a larger splitter and a small fixed rear wing. There’s also the track-focused Z07 performance package that adds carbon-fiber upgrades, such as a larger front splitter, dive planes, underbody strakes and a more prominent, racing-style rear wing.

How excited are people for the Z06? Enough that GM felt the need to warn dealers about charging outrageous markups for the coveted variant back in January, even though the car likely won’t go into production until sometime this summer. That didn’t stop the first Z06 coupe from selling for $3.6 million a week later, though. Of course, the proceeds from that sale went to charity so we don’t think GM will mind.

A Corvette EV and Hybrid Are Coming Soon

The Z06 is far from the only C8 variant worth looking forward to, though. In late April, General Motors President Mark Reuss went on CNBC’s Squawk Box to confirm that after years of speculation electrified Corvettes—both an EV and a hybrid—are finally in the works. While the exciting announcement was short on details, the executive did reveal that a hybrid would arrive first in 2023 and that an all-electric version would follow in the near future. A video aired during Reuss’s appearance also all but confirmed that the newest C8s would be the first to have all-wheel-drive.

As one of US’s defining performance vehicle’s, the Corvette has never been known for its fuel economy. The C8 is less of a gas guzzler than some its predecessors, but it still offers better performance on the road than at the pump. The 2022 Corvette, the most recent on record as of press time, has a fuel economy rating of 15 miles per gallon (mpg) for city driving, 24 mpg on the highway and a combined rating of 19 mph, according to the Environmental Protection Agency’s website. That means you can drive the car an average of 352 miles on a full tank. Gas prices are currently out of control, but the EPA puts the average cost of keeping the sports car’s tank filled at $3,950 per year. That means that on average C8 owners spend $8,000 more on fuel over a five-year span than other vehicle owners.

Like all Chevrolet models, the C8 Corvette comes with a healthy warranty. The bumper-to-bumper limited warranty covers the entire vehicle for repairs, including parts and labor, for three years or 36,000 miles, whichever comes first. Meanwhile, the powertrain warranty runs for five years or 60,000 miles, though other durations are available. Your first maintenance visit is also covered by Chevrolet, as well as the cost of any recall-related work.

C8 Corvette’s Price: Is It Worth It?

When Chevrolet first announced the mid-engine C8 Corvette, they promised it would start at less than $60,000. As far-fetched as that sounded at the time, the automaker managed to deliver on that promise. Three model years later and the ‘Vette’s starting price has now climbed to $64,995. Pricing has yet to be announced for the Z06, but there’s a general sense it will start around $90,000. Of course, with a near-endless list of options and trim levels—the 70th Anniversary Edition package tacks on $5,995, for example—the C8’s price can quickly climb skywards, with a fully loaded convertible available for north of $100,000. Still, when you consider the kind of vehicles that the C8 is competing with, even the most expensive version seems like a bargain in comparison.

More stories about the C8 Corvette from Robb Report: