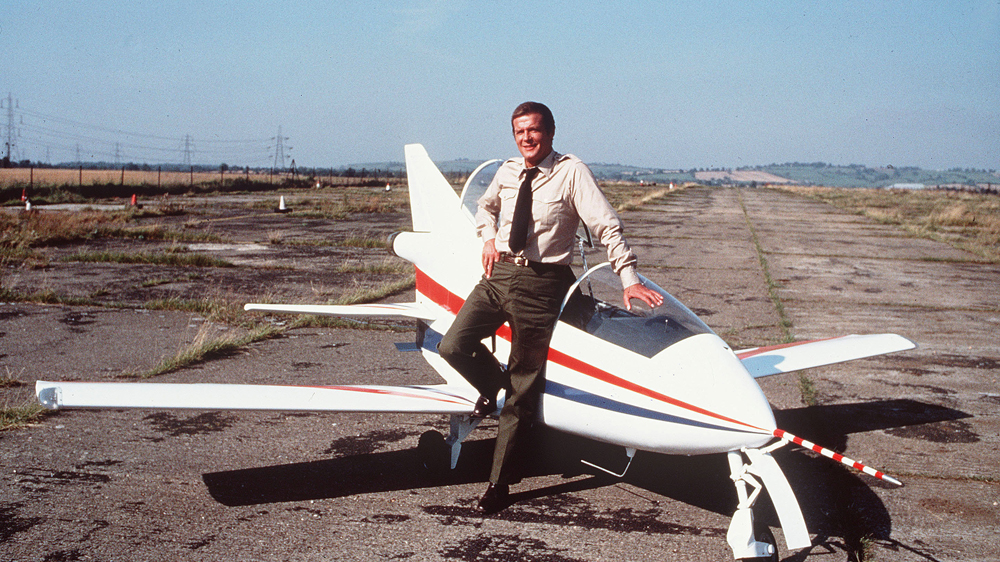 Whether it’s a car, home, jewelry, or piece of art, if an item going to auction has some kind of celebrity cachet, chances are good that it will garner additional attention—and perhaps draw higher bids. Consider, for example, the 1962 Lockheed JetStar that Elvis Presley owned briefly in the mid-1970s. After the King sold the aircraft in 1977, it sat on a runway in New Mexico for more than 35 years, collecting dust and rust. Nevertheless, when the plane went to auction in 2017, it sold for $430,000.

Even though the price was well below the $2 million presale estimate, it was still a lot to pay for an aircraft that couldn’t fly and needed a complete interior and exterior restoration. And, in fact, it was too much to pay. It seems the new owner experienced buyer’s remorse, because the JetStar went back on the block this past summer. There’s no word from the auction company, IronPlanet, on whether the seller made back his money.

The JetStar is not the only Elvis plane to go to auction, and it’s not the only one with a celebrity or pop-culture connection that helped it fetch plenty of notice, though not necessarily the owner’s asking price. The following aircraft became famous because of a role they played in a movie, on TV, or in real life, and at one time or another, each was available to the highest bidder.

Elvis fans breathed a sigh of relief in 2015 following the sale of his two jets—Hound Dog II and the Convair 880 that Presley named Lisa Marie after his daughter—because the new owner reached a “permanent” agreement to keep the aircraft at Graceland in Memphis, where they have been loved tender since 1984.

Elvis purchased the plane that would eventually bear the name Lisa Marie—a Convair 880 narrow-body airliner—from Delta Airlines in 1975 for $250,000. He spent another $350,000 refurbishing it. The custom interior includes a queen-sized bed, a bathroom with gold faucets and a gold washbasin, a videotape system linked to four televisions, a stereo system with 50 speakers, and a conference room. The tail section of the plane is emblazoned with the initials TCB—taking care of business. The plane last carried passengers in 1977, when it flew Priscilla Presley and George Hamilton, a good friend of Elvis, from California to his funeral at Graceland.

Like the plane in New Mexico that once belonged to Elvis, Hound Dog II is a Lockheed JetStar. Elvis bought it for about $900,000 in 1975 while waiting for the refurbishment of Lisa Marie to be completed.

The unrestored Mark IX Spitfire was one of eight World War II fighter planes that appeared in the 1969 film Battle of Britain. They belonged to Wilson Connell “Connie” Edwards, a pilot who later made his fortune in the oil, ranching, and stone businesses. Not a man afraid of old-fashioned bartering, he coordinated the movie’s flying stunts and took the airplanes as payment. Before selling them, Edwards kept the aircraft in a hangar on his private airfield in Texas for more than 40 years. The Spitfire in question, which an unidentified British collector acquired for an undisclosed price, is particularly notable because it flew in the actual Battle of Britain.

Edwards had intended to give the aircraft to his son, but the younger man was killed in a traffic accident. The total asking price for the eight aircraft was a firm $15 million, and according to Platinum Fighters, the company that handled the sale, Edwards received more than that sum.

In 2015, one year after that sale, a restored World War II Spitfire that had been shot down over northern France in 1940 and discovered in the sands of Calais 40 years later sold at a Christie’s auction in London for $4.8 million—the most ever for an aircraft at auction. The presale estimate was only $3 million. The proceeds from the sale were donated to the Royal Air Force Benevolent Fund and the wildlife charity Panthera.

This third installment of the Indiana Jones franchise was apparently more popular with moviegoers than the film’s Stampe et Vertongen SV.4 biplane was with collectors. The 1989 film became the first to sell $10 million worth of tickets in a single day; the auction company that conducted the sale of the plane last year, Prop Store Entertainment Memorabilia, expected to draw bids of $27,000 to $40,000, but the aircraft went unsold, indicating that the bottom end of the estimate range wasn’t reached.

The biplane was offered while sporting Royal Air Force markings rather than the Luftwaffe livery it displayed in the Last Crusade. This is because it was wearing makeup from its last film role (in what was also perhaps Brendan Fraser’s last good film), 1999’s The Mummy. Perhaps the mummy’s curse afflicted the biplane as well as Fraser’s film prospects.

In the Last Crusade sequence featuring the biplane, Harrison Ford and Sean Connery are aboard, trying to elude their Luftwaffe pursuers. Connery, as Indiana’s father, Henry Jones Sr., inadvertently shoots bullets from a machine gun through the airplane’s tail section and then tells Indiana, “Son, I’m sorry. They got us.” The prop for the bullet-ridden tail section was offered as a separate lot.

Out of Africa biplane  Photo: Courtesy of Bonhams

Out of Africa Biplane

The airworthy 1929 De Havilland Gipsy Moth biplane flown by Robert Redford’s character in the seven-time Oscar winner from 1985 was expected to sell for only about 103,000 euro. Instead, the price rose to nearly double that mark before the hammer dropped at the 2013 Bonhams auction. The price, the equivalent of about $280,000 at the time, was the most ever paid for a Gipsy Moth. The winning bid came from a buyer in Kenya, where the movie was set.

The plane is featured in a four-minute-long romantic scene in which Redford is the pilot and his passenger is Meryl Streep, who, of course, was nominated for a best-actress Oscar. They fly over the Kenyan savannah, holding hands. Alas, later in the film, Redford’s character is killed when (spoiler alert) he crashes the plane en route to be with Streep’s character.

The plane, painted bright yellow, was in superb condition when it was sold and came with a permit to fly.

The 1967 Grumman Widgeon, whose arrival at the start of each episode of Fantasy Island was heralded by Tattoo shouting, “De Plane! De Plane!” fell on hard times after (spoiler alert) the show concluded its eight-year run in 1984. According to various reports, the aircraft passed through the hands of a series of owners after Fantasy Island went off the air. It crashed in a swamp on at least one occasion and was involved in a gear-collapse accident. At least twice it was confiscated by drug-enforcement authorities (it was, after all, the ’80s) and sold at auction. However, it was refurbished in the late 1990s and presented on the air-show circuit throughout the Midwest.

The aircraft is not an authentic Grumman Widgeon. It’s a Société Construction Aéro-Navale Type 30, a license-built copy of a Grumman Widgeon. It was built in Rochelle, France, in 1951, eventually disassembled, and stored until 1967, when it was imported to the United States and reassembled with new engines.

Nearly all of the footage of the plane used throughout the series was shot in a single day. When the guests arrived at the island at the start of each episode, they climbed out of a plywood mock-up of the back of the plane.

Before the Bede BD-5J starred in the opening sequence of the 1983 James Bond movie Octopussy, in which Agent 007 uses it to evade the bad guys and a heat-seeking missile, the aircraft had already made a claim to fame. At only 358.8 pounds, it was listed by Guinness World Records as the world’s lightest single-engine jet.

A propeller version of the aircraft was developed in the late 1960s by the Bede Aircraft Corporation and sold in the early 1970s as a kit plane before the company went bankrupt in the mid-1970s. The jet-powered version, the BD-5J, which was also known as the Acrostar, could achieve 300 mph. Two examples of the aircraft were flown in air shows throughout the 1980s by Coors Light—which called the planes, naturally, Silver Bullets—and another appeared in Bud Light commercials. The aircraft have been involved in several fatal crashes, including one in 2013 involving a BD-5J that was part of Red Bull’s Flying Bulls racing team.

In addition to its role in Octopussy, the BD-5J made a cameo in the later Bond film Die Another Day, in which it is seen hanging on the wall of Q’s workshop.

“The Miracle on the Hudson”  Photo: Justin Lane/EPA/REX/Shutterstock

Miracle on the Hudson Airbus A320

The Airbus A320 that Tom Hanks (or, should we say, Captain Chesley “Sully” Sullenberger) successfully ditched into the Hudson River in 2009 went to auction in 2010 with the expectation that it would be sold for scrap metal. A similarly scrapped Airbus 310 had recently sold for $2.6 million and reportedly earned its new owners $4 million when they broke it up and sold it for parts.

The engines on U.S. Airways flight 1549 lost power following a bird strike, and by landing the plane on the river, Sully managed to save all 155 passengers and the crew. The airliner eventually was hoisted out of the river and onto a barge. Its wings and tail were cut off so that the fuselage could be hauled on a flatbed truck to a warehouse in New Jersey, where National Transportation Safety Board inspectors spent nearly two years trying to figure out what went wrong and whether Sully did the right thing by landing in the Hudson.

At the auction, instead of a salvage company placing the winning bid, the plane was acquired by the Carolinas Aviation Museum for what is reported to have been a bargain price. The museum had the plane transported to its home in Charlotte, N.C., the destination of Flight 1549 on the day of its splash landing. It reattached the wings and tail, restored the interior, and now has the aircraft on permanent display. According to the museum, the number of daily visitors more than doubled in the fall of 2016, after Sully, the film re-creating the splash landing, was released.

The First Air Force One

The Lockheed VC-121 that was known as Columbine II, Dwight Eisenhower’s presidential plane and the first to be designated Air Force One, has now been completely restored, but at one time it was on the verge of becoming a crop duster or scrap metal.

The Air Force One call sign was established in 1953 following an incident in which an Eastern Airlines commercial airliner accidentally entered the same air space as Columbine II. The airliner was flight 8610, and the president’s plane was flying under the call sign Air Force 8610.

The aircraft, serial number 48-610, was retired in 1968 and sent to storage at Davis-Monthan Air Force Base in Arizona. Two years later, it was part of a $35,000 five-aircraft auction sale to Mel Christler, a Wyoming businessman who bought the VC-121A planes from the Air Force with the intention of converting them into crop dusters. He didn’t know that one of those planes was the original Air Force One.

Christler converted the other four VC-121 aircraft, but not Columbine II. Its landing gear was faulty because it had been replaced with parts from a different plane model. The owner therefore decided to instead use the plane to supply the other four with spare parts. In 1980, he was on the verge of cutting up the aircraft and selling it as scrap when the Smithsonian Institution—like the deus ex machina in a schlocky movie—contacted him in time and informed him of serial number 48-610’s true identity.

The plane’s current owner acquired it in 2015 and began a full restoration in 2016.