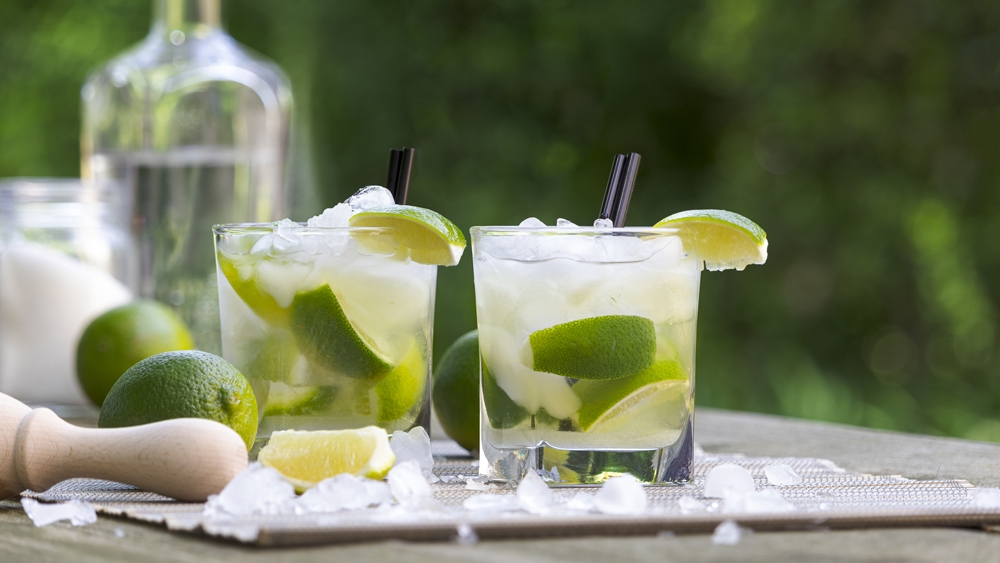 The Caipirinha is one of those convenient drinks that tastes exactly like it sounds. As normal American life doesn’t intersect much with the Portuguese language, the word Caipirinha (“kai-puh-ree-nya”) with all the “i’s” and the strangely placed “h” feels evocative, distant even, which is great because that’s more or less exactly how it feels to drink one. The flavor is familiar in overall structure but distinctly Brazilian, like being at a beautiful beach on which all the men are wearing extremely small Speedos.

Most globally known cocktails are truly global at this point. The Daiquiri is from Cuba but it doesn’t really belong to Cuba anymore, nor does, say, the Manhattan to New York, but the Caipirinha remains Brazilian to its bones. As a drink, it is practically sunshine in a cup, bright and grassy and irrepressibly summery. It tastes like a Daiquiri that just mowed the lawn. It’s Brazil’s national cocktail, consumed in great quantities by both tourists and locals alike, and is far and away the most popular delivery system for their national spirit, cachaça.

To the uninitiated, cachaça needs a small primer. The first thing to know is how to say it: That little goatee under the third “c” is called a cedilla and turns what would be a hard “c” into a soft “s,” so it’s “kah-SHA-sa,” and not, though it would be more fun, “kah-cha-ka.” The second thing to know, and what is immediately apparent once tasted, is that it’s different. It’s very often called “Brazilian rum,” but that’s not quite right. They’re both made from sugar cane, sure, but cachaça is made from fresh sugar cane juice, as opposed to rum, which is made from molasses. What this means in practice is that cachaça is to rum as tonkotsu ramen is to Cup-O’-Noodles, or if perhaps that’s a bit unfair, as wild venison is to corn-fed beef. It’s rum untamed.

If you were to juice some sugarcane, boil that juice and centrifuge it, you get crystallized sugar on one hand and molasses on the other. Rum as we know it started in the Caribbean (we think) around the mid 1600s (we think) as something interesting to do with the molasses that would otherwise get thrown away, like an early zero-waste program for an industrial byproduct. But, if for one reason or another you have more sugar cane than you know what to do with, you could just ferment and distill the straight sugarcane juice, and this is how cachaça is made. They have in fact been distilling sugar cane juice in Brazil since something like 1530, making it perhaps the first spirit made in the Americas. By the year 1660, the same time that Europeans were “inventing” rum in the Caribbean, cachaça was already so popular in Brazil that when the colonial government tried to crack down on it, the people of Rio de Janeiro literally revolted.

Sugarcane is a grass, albeit a very tall one: Take a sip of cachaça, and the grassiness of the raw materials is immediately obvious. Compared to rum’s soft, almost ethereal tropicality, cachaça is pungent and intense and funky and alive. It’s that scene in Pleasantville when the tree bursts into flames. And one of the many charms of the Caipirinha is that it works to tame the intensity of the spirit while preserving its inherent character. As this summer looks more with every passing week like the crappy sequel to last summer, drinks like the Caipirinha are invaluable as little delicious portals into other worlds. Try one while the weather holds, and be transported. Saúde.

In a very sturdy rocks glass, add sugar and lime pieces together, and muddle, pressing as much juice as you can out of the limes. Add cachaça, and stir for 10 to 15 seconds before adding the ice, to try to dissolve as much of the sugar as possible. Now add as much ice as will fit in the glass. Dump all of that into a cocktail shaker and shake for 5 or so seconds, then dump it all back into the glass you muddled in. Taste for balance—you’ll probably need a touch more lime juice.

Cachaça: Like rum, cachaça is big business, and several brands are made in truly stupendous quantities. The most popular brand, Cachaça 51, sells nearly as many cases globally in a year as Bacardi, and almost all of it is consumed in Brazil. That is to say, most of the cachaça that’s made is of industrial (read: relatively low) quality, and indeed, bad cachaça punishes you twice: once in the moment, and once again in the morning.

Fortunately, many of the brands that make it to US shelves and backbars do so on the basis of their quality. Leblon, Sagitiba and Novo Fogo all make delicious products, but in my side-by-side tests, a clear winner for me is Avua Cachaça. Their aged products are delicious (cachaça is traditionally aged in weird indigenous Brazilian woods and aged cachaça is an article all its own), but for Caipirinhas, I’d go with their unaged bottling, the clear one labeled “Prata.”

Sugar and Lime: I’m not going to lie to you—muddling limes into sugar is a big pain in the ass. In addition to being kind of physically difficult, you have no earthly idea how much juice you’re getting out of the limes, so you need to make it, then taste it, and adjust after. So why do it? There’re two reasons: 1. You are using the granularity of the sugar to ablate the skins of the limes, getting all the zesty lime oil out of them and greatly improving the cocktail; and 2. This is how it’s done in Brazil. I’m told that a bartender in Brazil wouldn’t recognize a lime juice and simple-syrup build—a daiquiri, essentially—as anything like a Caipirinha. So to be traditional, use white sugar and cubed limes.

That being said: when I’m making them for myself, I cheat it: I use the Whiskey Smash trick and put a couple lime peels in the shaker tin alongside 2 oz. cachaça, 0.75 oz. lime juice, 0.75 oz. simple syrup and a couple lime wedges, and shake that. You get a touch more juice out of the wedges and a bunch of zest from the peels, then just dump that all into a rocks glass and drink it that way. It looks similar (limes floating in broken ice is the iconic Caipirinha look), feels the same, is totally balanced, and is a lot less work. It’s not Brazilian, but hey, neither am I.