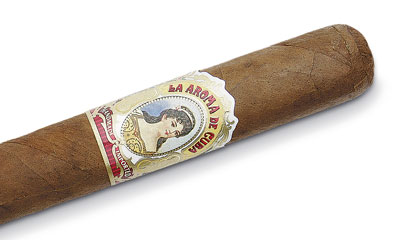 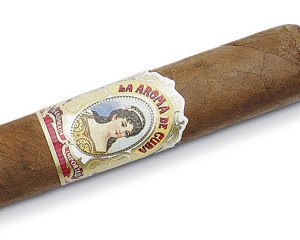 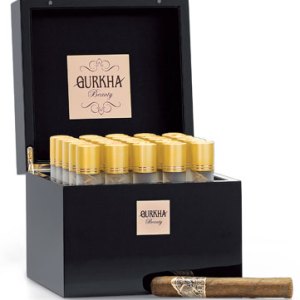 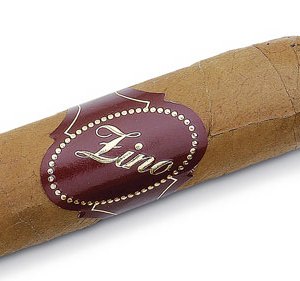 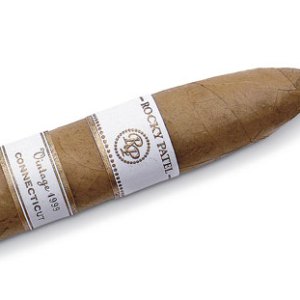 A smoker’s definition of the perfect cigar will depend as much on the time of day as on his palate. Even stalwarts will find heavier cigars overwhelming at a morning affair, and those same veterans may consider lighter cigars to be as flavor-free as the air itself, regardless of the hour of the event. We therefore sorted our selections of this fall’s finest new cigars into three groups: aperitifs, for lighter cigars; entrées, for medium-bodied smokes; and digestifs, for the most powerful flavors. By any smoker’s estimation, this collection includes the perfect cigar for any occasion.

No matter what the delicacy— cigars, wine, food, music—it is preferable to limber up the palate with lighter fare before indulging in heavier flavors. Smokers will find this task easier now that many brands known for heavy smokes have introduced lighter cigars. Any of these selections offers an ideal way to start a day or an evening—or to introduce a neophyte to the delights of cigar smoking.

We’re with the Band

“If you’re going to give someone a cigar,” goes the adage, “make sure it has a good-looking band.” Guests who receive the Ashton La Aroma de Cuba will be pleased to discover that it lives up to its elaborate dress. Winston Churchill is said to have favored the original La Aroma de Cuba when he was stationed in Cuba as a military observer in 1895. The current version is made in the Flor de Copan factory in Honduras. Its Honduran wrapper accents a Honduran and Nicaraguan filler to give this cigar a smooth, mellow, medium-strength flavor enhanced by a minimum of six months’ aging. Eleven sizes are available; the most recent introduction is an oversize 5¼ x 60 Toro. -R.C.H.

The Gurkha brand is becoming synonymous with intensely flavored smokes and creative packaging. What a surprise, then, to find the newest Gurkha among this year’s finest light cigars. The Gurkha Beauty swathes Nicaraguan filler and a Dominican binder in a buttery Ecuadoran-grown Connecticut-seed wrapper. The taste is far lighter than those of the dark cigars for which the brand is best known, yet no less distinctive or aromatic. A subtle, indefinable twist makes the 6¼x 58 Beauty one of the most flavorful light cigars we have sampled. And the packaging—each cigar is enclosed in a frosted glass tube with a gold-colored cap—is just as delightful. -B.B.

Honduran cigars are known for their earthy, powerful flavors, but some smokers consider them a bit coarse compared with Dominican cigars. The new Zino Classic line may change that perception. It employs a variation of a Honduran blend created by company founder Zino Davidoff himself; the addition of two Dominican fillers and a Connecticut-seed wrapper grown in Ecuador smooths the taste of its Honduran filler and binder leaves. The 5 x 50 Zino Classic #6 will enchant your guests with its springtime-fresh herbal nose and trufflelike taste. It seems the perfect smoke to offer during an afternoon round of golf—or during the round of drinks that so often follows. -B.B.

The flaxen, 7-year-old Connecticut wrapper of the Rocky Patel Vintage 1999 Connecticut may appear nondescript next to the dark, oily maduro wrapper of the original Rocky Patel Vintage. However, the lighter Vintage is its forebear’s equal in terms of flavor, in part because it uses the same blend of 7-year-old Dominican and Nicaraguan filler and binder tobaccos. Although the Vintage Connecticut’s blend is mellow enough to charm even first-time smokers, subtle undertones of flavor will retain the interest of connoisseurs. This is an ideal cigar to complement before-dinner cocktails; anyone who would not enjoy a mojito, a Vintage Connecticut, and a beautiful sunset is a difficult guest to please. -B.B.

Macanudo’s 2000 crop of Connecticut shade wrapper was good enough to merit only the sixth Macanudo vintage declaration since 1979. The company has sorted and graded the wrappers twice, each time refining the final selection. All Macanudo wrappers endure the “winter sweat,” a process in which they are aged in the Dominican Republic, transported back to Connecticut during the winter, and then returned to the D.R. for additional aging. For its vintage tobaccos, Macanudo reserves a second year of winter sweat to further deepen their flavors. With its medium strength and creamy consistency, the Macanudo Vintage 2000 Cabinet Selection is a fitting tribute to one of the last great harvests of the 20th century. R.C.H.

To a guest whose taste buds are accustomed to powerful flavors, the offer of a light cigar may draw only polite thanks and a shy request for something stronger. But even the most jaded smoker can appreciate a fine medium- bodied cigar, which is why a good host always should keep at least one box of these entrées on hand. Each cigar in this category represents an ideal way for an experienced smoker to begin the evening—or for a beginner to step up to more flavorful fare.

Two sizes of the marvelous Perdomo Estate Selección Vintage 1991 are now available in handsome, cedar-lined, black metal tubes—a form of packaging that is far more durable and elegant than cellophane wrappers. The ESV marries heady Nicaraguan filler and binder tobaccos to one of three wrappers: Connecticut shade-grown, Cameroon, or Nicaraguan maduro. (Only the Cameroon-wrapped version comes in the tube.) The Connecticut and Cameroon wrappers deliver a more moderate punch; these are the ones we recommend as entrée-level smokes. The Nicaraguan wrapper adds a peppery edge we love, but it pushes this cigar into the digestif category. Both sizes—the 5¼ x 48 and the 6 x 54—are aged for at least 200 days after manufacture. -B.B.

General Cigar needed a favorable Supreme Court ruling before it could make this cigar. The Court established that General Cigar—and not Cuba—has exclusive rights to the Cohiba name in the United States. In celebration, the company has produced its first new Cohiba since 2001. The Cohiba Black sports a hefty Connecticut Broadleaf maduro wrapper, but its espresso-like color belies the delicate sweetness of the smoke. The cigar maker uses only the tip of the leaf—the sweetest part; however, the leaves remain on the plant 1.5 times longer than normal, a process called medio tiempo that results in a more mouth-filling smoke. The company further deepens the flavor by aging the tobaccos in palm frond wrappings called tercios, which brings out the tobacco’s natural oils. -R.C.H.

To celebrate what would have been the 100th birthday of company founder Zino Davidoff, his namesake brand has created two perfectos, cigars tapered at both ends. One is the Diademas 100, available only in Davidoff stores; the other is the more accessible Davidoff Diademas Finas. The Finas is no less stellar than its 91¼4-inch brother—and at 6¼ inches, it is certainly a more practical smoke. The company does not reveal the origin of its tobaccos, but the panoply of flavors they yield places the Finas among 2006’s finest new smokes. A box of 10 Finas, festooned with a photo of Zino Davidoff outside his original shop in Geneva, would make a most impressive gift from an appreciative guest. -B.B.

In 1996, General Cigar announced a limited run of Partagas cigars wrapped with (at that time) 20-year-old Cameroon leaf. But the company held back a small cache of this tobacco and has used it to produce the Partagas 160. The name refers to the recent 160th anniversary of the brand’s 1845 founding date. The rich, spicy wrapper has a rust red color that comes from three decades of aging. The binder is Mexican, and the filler is a blend of 8-year-old Mexican leaf and Cuban-seed tobaccos from the Dominican Republic. -R.C.H.

To mark the 90th birthday of J.C. Newman Co. patriarch Stanford Newman (who has since passed away), the Fuente family created Stanford’s 90th Diamond Crown Maximus. The cigar is a slightly reblended version of the already flavor-packed Diamond Crown Maximus. The 90th offers a touch more vanilla sweetness in its Dominican filler, but the focal point is the wrapper. Unlike the Ecuadoran sun-grown leaf of the regular Maximus, Stanford’s 90th features an oily, 28-year-old Cameroon wrapper from the fields of the Meerapfel family—West Africa’s premier growers of this leaf. The use of this wrapper is symbolic: Stanford Newman was the first to import Cameroon-wrapped premium cigars into the United States after the Cuban embargo. Only 850 of the leather-covered presentation boxes, each containing 20 of these 7 x 48 cigars, will be sold in the United States. -R.C.H.

Spice up your collection with any of these powerful cigars, and you surely will delight even the most demanding smoker. None of these selections should be handed out indiscriminately: Each is too strong for beginners and will overpower most food and drink. It is best to consume any of these cigars after dinner, along with a peaty single-malt Scotch, a dense vintage port, or a full-bodied microbrew beer.

According to some of those few who have been able to locate these all-Dominican puros, the newly introduced Ashton ESG (estate sun grown) is the strongest cigar in the Ashton line. We disagree: The VSG is stronger, but the ESG is certainly full-bodied, with the soul-satisfying flavor of a thick porterhouse steak. The primary source of its hearty flavor lies in the ESG’s sun-grown Dominican wrapper, a leaf that Carlos Fuente Jr. created just for this cigar on his family’s Chateau de la Fuente. The company is producing a 6 x 48 this year and will introduce a new shape each year through 2010, when Ashton will celebrate its 25th anniversary. -R.C.H.

Camacho’s switching to a lighter blend may seem like a retreat for a brand that has built its reputation on heavy-bodied smokes. But we welcome the change, often finding such cigars as the Camacho Corojo and Coyolar Puro too intense to finish. The latest version of the Camacho Liberty is no lightweight, but the blend is toned down to the point where even an occasional smoker might be able to enjoy the cigar down to its last inch. The painted wooden coffin that encloses each cigar makes the Liberty an ideal addition to a gift bag or a welcome treat for a cigar-loving host. -B.B.

The only place you can acquire Casa Fuente cigars is the Casa Fuente cigar boutique at the Caesars Palace Forum Shops. The cigars have OpusX fillers and Meerapfel-grown Cameroon wrappers, which contribute to their hefty yet sophisticated taste. New shapes for this year are a pyramid and a double corona. -R.C.H.

The Cubano Limitada Fonseca, the latest creation from Fonseca, lives up to the high standards established by the MATASA 30th Anniversary Fonseca, Robb Report’s Best of the Best 2006 cigar. The Cubano Limitada’s taste tantalizes from the first puff. A floral nose with hints of peat complements its smooth, chocolaty taste. The blend combines powerful ligero leaves of Dominican and Nicaraguan origin, a Dominican Olor binder, and a Cuban-seed Honduran criollo wrapper. Each box contains a wheel—or bundle—of 24 cigars. The most distinctive of the four sizes is the Belicoso Corto, which, at 5 inches, is the shorter of the two torpedo-shaped cigars in the line. -B.B.

The packaging of the Arturo Fuente OpusX Three-Pack is reminiscent of the Victorian era’s elegant sterling silver cigar cases, but, as is appropriate for the holiday season, it is much more colorful. The cigar-filled cases are available for the 5 x 50 OpusX Robusto, the 9 x 47 Perfecxion, and the 5¼ x 46 Fuente Fuente. Any of these will leave an impression that will last throughout the new year. -R.C.H.