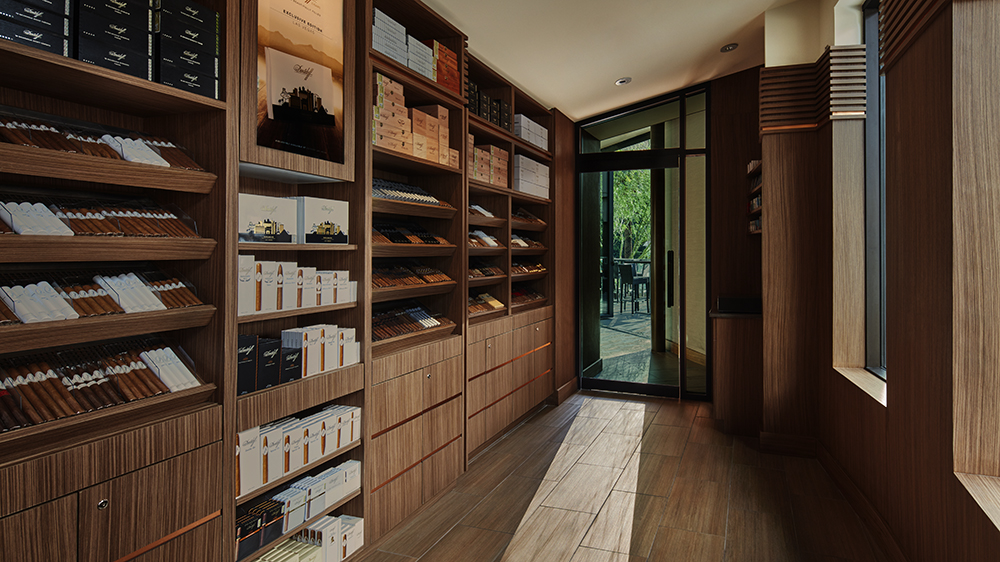 In the halcyon days before the Nevada Clean Indoor Air Act of 2006, aficionados could fire up a stogie practically anywhere in Sin City. But since then, smoking has been forbidden in most public places, including restaurants that used to allow ritualistic after-dinner cigars. That’s now all in the past. Even in casinos, which are primarily exempt from the non-smoking law, enjoying a belicoso at the blackjack table while seated next to a non-lover of the leaf can be challenging, at best.

But in a town that re-created the cities of Paris and New York in the middle of the desert and boasts a Moroccan-themed pool on the third floor of Park MGM’s NoMad hotel-within-a-hotel, Las Vegas is used to resolving challenges. As a result, some of the most innovative cigar lounges can now be found along the Strip. So for a city that relishes lucky numbers, here are seven of the best.

If a group of dedicated cigar smokers brainstormed what the perfect cigar bar would be, chances are they would end up conjuring something pretty close to this elegant 4,000-square-foot enclave inside Caesar’s Palace that’s devoted to premium cigars, luxury spirits and gourmet cuisine. The walk-in humidor and accessories shop holds more than 1,000 of the rarest smokes, including Fuente Fuente OpusX, the Padrón 50th Anniversary Limited Edition and the complete line of My Father Cigars. On the other side of this sweeping circular glass enclosure lies a spacious lounge and gaming area with huge TVs and a 100-seat bar stocked with premium spirits ranging from Yamazaki 18 Year Old single malt to Pappy Van Winkle 23 Year Old bourbon. A separate garden courtyard has its own bar, a fireplace and a simulated skylight. In addition, The Clubhouse at Montecristo by Old Homestead, a private wood-paneled room with a separate filtration system, may be reserved by those who wish to enjoy a hand-rolled stogie with a coursed dinner ordered from the menu of Old Homestead Steakhouse, which conveniently enough, is just across from the Montecristo Cigar Bar entrance.

Accessed by a private elevator located off of the main casino floor at Caesar’s Palace, one might not think that this renowned Beijing-inspired restaurant, famous for its theatrical demonstration of hand-pulled noodles, tableside carved Beijing duck, and elegant rolling Champagne cart, would also cater to cigar smokers. But once guests have enjoyed a meal, they may retire to the open-air pleasures of either of two outside patios. Both overlook the picturesque Garden of the Gods and welcome after-dinner cigar smoking (the right side patio has a better view of the pool area). Here one will also find a well-appointed bar stocked with premium spirits, and for those who did not bring their own smokes, a cigar menu is provided, offering selections such as Padrón 1964 Aniversario, My Father Cigars Le Bijou and the Dominican Romeo y Julieta 1875 Love Story.

If tiki is your thing, this recently renovated rum-centric bar at the Mirage blends Caribbean cigar-making culture with exotic South Seas cocktails. A well-stocked humidor carries everything from the Dominican-made Cohiba to the Ashton La Aroma de Cuba. In addition, the lounge’s newly revitalized cocktail menu also offers a selection of rum and cigar pairings, such as the Padrón 1926 Series No. 2 belicoso with a Dos Maderas 5 + 5 rum (creating a medley of wood, coffee beans and vanilla), or a Davidoff Special Series R robusto with an El Dorado 15-year-old rum (resulting in a spicy tobacco profile smoothed over by the rum’s sweet, syrupy notes). All of this can be enjoyed in the spacious al fresco lounge.

Located right off the main casino, the “hidden” speakeasy-style entrance of what looks like a bonafide vinyl record store inside the Park MGM is actually—surprise!—a three-room retro cocktail lounge, accessed through a phone booth, with a cassette-lined entryway, album-covered walls, vintage television sets and a 1963 Bristol Lodekka double-decker bus that has been converted to a DJ booth and parked in the middle of an open-air patio. And this is where you should be headed if you want to light up a stogie to celebrate the nostalgic music and vibes of the 1960s. Bring your own smokes, but take advantage of the periodic celebrity guest bartenders and, of course, entertainment, with admission to the club varying in price according to the days and events (the club is open only on Wednesday, Friday and Saturday).

This dark, elegant 1890s style cocktail lounge inside the MGM Grand has one of the best selections of American, Canadian, Scotch and Irish spirits on the Strip, not to mention some imaginative whiskey flights and cocktails. Whether or not you partake of the blackjack tables and video poker machines, the plush leather sofas and oversized chairs make this the perfect spot to settle back and enjoy a premium cigar with an equally worthy spirit. A cigar menu is being introduced this spring, but you may also bring your own stogies.

This is the only cigar bar in Las Vegas where you can find the complete range of every cigar made by the legendary Fuente factories, from Ashton to Diamond Crown to OpusX. It is also the only place in The Forum shopping arcade at Caesars Palace where cigars may be smoked. As the only cigar lounge licensed by the Fuente family, this sanctuary reflects their Cuban heritage, with an interior décor reminiscent of a 1930s Havana cantina, and a well stocked bar that includes exclusive Casa Fuente bottlings of Kavalan Taiwanese Sherry Cask Strength single malt whisky and Jack Daniel’s Single Barrel Select, not to mention a secret menu (you have to ask for it) of rare whiskies that include Royal Salute 21 Year Old and Talisker 30 Year Old. However, the real treasures lie inside the gated walk-in humidor, which is also the only place in the world where you can find the rare Casa Fuente cigars, which are produced exclusively for this cigar smoker’s haven.

When your significant other wants to go shopping but you’d rather – well, smoke a cigar and have a cocktail – this is Sin City‘s perfect solution. This upscale Fashion Show Mall is surrounded by the Wynn, Encore, Venetian, Palazzo and Treasure Island casino resorts, and is the focal point for 234 retail stores, not to mention a fashion show every weekend (hence the name). However, for cigar smokers the real draw is the free-standing, 1,500-square-foot circular edifice of the Davidoff Cigar Bar, which is celebrating its 20th anniversary this year. Here you will find the complete range of Davidoff products including cigars, accessories and limited editions. Best of all, smoking is allowed both inside the lounge (where spirits, beer and wine are served along with bar bites and charcuterie plates), as well as outside on the spacious patio, with views of the Strip. A cigar sommelier is available to clip and light guest’s cigars, and private cigar lockers are planned for later this year.