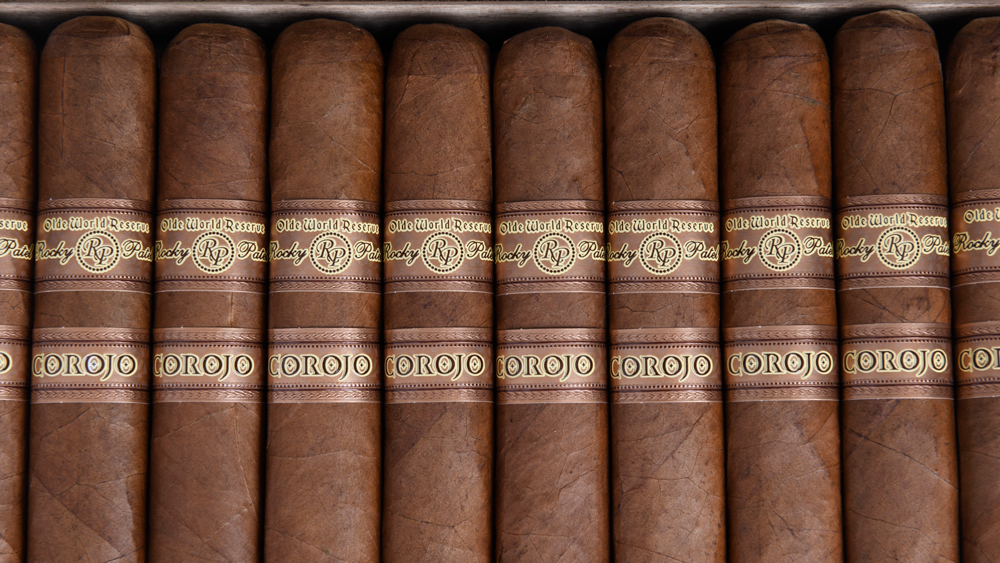 These past twelve months rolled up into a banner year for cigar smokers. We saw a renewed focus on some classic brands from the past (thanks to pending FDA rules that may soon make one-off “boutique” brands passé), new hybrid tobaccos, and a resurrection of old Cuban cigar shapes. These trends have resulted in some of the best cigars we have ever put a match to. Here are a few of our standout favorites in 2018:

Three years ago, cigar impresario Rocky Patel met Cuban cigar maker Hamlet Paredes, who had just immigrated to the United States, and immediately hired him. Hamlet—he usually just goes by his first name professionally—was born and raised in Havana and had spent more than 25 years in the cigar industry, where he perfected his cigar-making skills, including mastering the art of rolling cigars without molds or presses, a technique known as “free hand.” The culmination of all this is Hamlet’s resurrection of an old Cuban shape, a 7 5/8 x 58 Salomon figurado. It is a different, milder blend than his previous Tabaquero Salomon and smokes with a medium-rich, mellow smoothness, thanks to Hamlet’s use of a Mexican maduro wrapper combined with a Nicaraguan and Brazilian filler.

Its “2017” nomenclature notwithstanding, this cigar was unveiled at the 2018 IPCPR tobacco trade show and hit tobacconists’ humidors in September. Toasted Cocoa, sweet ginger, and a sprinkling of black pepper and cinnamon all gather in a medium-full strength smoke that make this a late-in-the-day cigar. Its Ecuadorian wrapper and binder—along with Colombian, Dominican, and Nicaraguan filler tobaccos—are all taken from the 2006 harvest. The flavors are maximized by a lengthy aging time. Only one size is produced, a 6 x 54 Toro Gordo.

In spite of his tattoos depicting practically every major (and a few minor) cigar brand in the world (tatuaje means “tattoo” in Spanish), Pete Johnson is a rather laid-back cigar entrepreneur. That is why we had to pointedly ask him if this cigar was, in fact, a celebration of his 15th anniversary in the cigar industry. It is, and it does him justice. Two shapes are produced, a 5 ½ x 52 Belicoso Fino and a 6 ½ x 52 Torpedo Grande. Both are available in either Rosado Claro or Rosado Oscuro Ecuador Habano wrappers, with Nicaraguan binders and fillers. A larger Diadema size will be coming out in 2019. But for now, either cigar is a fitting companion for a small-batch bourbon like Blanton’s or Knob Creek.

This old Cuban brand was resurrected over a decade ago but then faded away. However, it was relaunched last year in Torpedo, Robusto, and Churchill variations with a new blend of Nicaraguan and Dominican fillers, along with an Indonesian binder and a 12-year-old Ecuadorian wrapper. It proved an immediate success, but because different shapes bring out different flavors, something new was added this year—a 6 ¾ x 43 lancero. While the medium strength of the original blend is retained, the coffee and leather nuances are intensified. Only 500 boxes of 25 cigars each will be produced annually.

When you’ve had a good thing going, why not bring it back? That’s what happened this year with this brand, which made its debut in 2006, but was taken off of the market in 2012 due to a scarcity of wrapper leaf. The relaunched Olde World Reserve Corojo is again crafted at the Paraiso factory in Danlí, Honduras and features the original tobacco recipe: Honduran corojo wrapper, plus Nicaraguan binder and fillers. However, the Olde World Reserve Maduro is now being rolled at Rocky Patel’s TaviCusa factory in Estelí, Nicaragua. It features a blend comparable to the original Costa Rican Maduro, Honduran and Nicaraguan fillers, with a Nicaraguan binder. Both varieties of Olde World Reserve are available in 5 ½ x 54 Robusto, 6 ½ x 52 Toro, and 6 x 60 Sixty sizes.

Some Fonseca fans may compare its newest addition to the brand’s more intense Casa Magna. But although just as full bodied, the Vega Magna is a slightly gentler smoke, featuring an Ecuadorian sun-grown wrapper and a filler composed of Dominican seco, viso, and ligero leaves that were aged in air-tight, palm frond tercios, an old Cuban technique that brings out the maximum flavors of these tobaccos, some of which are from the 2001 harvest. Three sizes are produced: 5 ½ x 54 Robusto, 7 x 52 Belicoso, and 6 x 50 Toro. Unique to the Vega Magna is its packaging, for each box of ten cigars encompasses a removable, framed and ready to hang laser-etched art scene by Dominican artist Pragmy Marichal that depicts various activities in the tobacco fields.

When two London-based cigar aficionados get together to create a limited production brand that ends up being fine-tuned by both of them, you are bound to get a memorable smoke. That is certainly the case with this collaboration between cigar maven Akhil Kapacee and Havana cigar impresario Mitchell Orchant of C.Gars Ltd. Made in Nicaragua in the Plasencia factory, this is only the second maduro in the Regius line and is new this year. The blend is not something they discuss (primarily Nicaraguan is our guess) but it is rich, spicy and worthy of a Macallan 18. Five sizes are produced, 5 1/8 x 42 Corona, 7 x 47 Grandido, 6 ½ x 56 Gran Toro, 4 7/8 x 50 Robusto, and 6 x 50 Toro.

Just call it “Hoyo by Fernandez” for short. This is the third cigar A.J. Fernandez has done in General Cigar’s Amistad series, coming right after the Silver and the Gold, but this is the fullest-flavored of the three. In fact, the band design is as bold as the strength of this meaty, Nicaraguan smoke, and reflects a new, updated look for the old Hoyo de Monterrey brand. Three sizes are offered: 4 ½ x 50 Rothschild, 6 ½ 52 Toro, and a box pressed 6 x 60 Gigante. Featuring an Ecuadoran Sumatra Oscuro wrapper, Mexican binder, and a Nicaraguan Habano filler, we found notes of cinnamon, leather and even a perceived hint of hot sauce in the first few puffs. This is definitely not a cigar to smoke on an empty stomach.

Just as some premium grape growers eventually start producing their own wines, it was only a matter of time before Nestor Plasencia and his two sons, Nester Andres and José Luis, would start making their own cigars. After all the Plasencia family has been growing premium tobaccos for other brands for five generations. But their latest offering, the Cosecha 146, is arguably their best cigar to date. “Cosecha means crop,” says Nester Andres, “and this is our 146th crop, which consists of Honduras and Nicaragua tobaccos from 2011 and 2012. So, this is not a Nicaraguan puro, which makes it different from the other cigars we have produced.” Featuring a five-year-old Honduran wrapper with a Nicaraguan and Honduran filler, it burns smoothly with a gentle earthiness. It is available in five sizes, each named for one of the five farms that produced the tobaccos for this extraordinary cigar.

In 1968 Joya de Nicaragua became the first branded cigar in Nicaragua, so this year they created something special to honor their 50th anniversary. The appropriately-named Cinco Décadas is produced in the company’s two original sizes—7 x 50 El General and 6 x 54 Diadema. These Nicaraguan puros are made with tobaccos that have been aged for over five years, and smoke with the rich earthiness that Nicaraguan tobaccos are known for. “Not only is this a celebration of the brand of Joya de Nicaragua, but it is also a celebration of the cigar industry in Nicaragua,” said Joya de Nicaragua’s United States Brand Manager, Daniel Barrios. Produced in a limited edition of 5,000 boxes of ten cigars each, only 3,000 of those boxes have been allocated to the U.S.

Following on the success of their first limited edition Chef’s Cigar in 2016, in which Davidoff’s master blenders collaborated with six top European chefs, a second Chef’s Cigar was created this year. For the 2018 limited edition, Davidoff enlisted the talents of celebrity chefs Thomas Keller from The French Laundry, Bouchon and Per Se in the United States; Alvin Leung from Bo Innovation in Hong Kong; Klaus Erfort from Gästehaus in Saarbrucken, Germany; Heiko Nieder from The Restaurant in Zurich; and Shaun Rankin from Ormer Mayfair in London. Combined, these top chefs boast a total of twelve Michelin stars, with Thomas Keller accounting for seven of them. Naturally, the chefs are all cigar smokers. The result was a medium-plus strength 6 x 54 Toro full of creamy chocolate, pepper, and ginger, with a gentle finish. “One of the main things all of us wanted to achieve was a cigar that could be smoked throughout the day and in the evening,” said Chef Keller, “because for a chef, there’s no set time when you can sit down and smoke a cigar.”

Following an industry trend that began last year, this historic brand boasts bold new packaging. Previously only made in the Dominican Republic, this new version is made for the first time by the Plasencia family in Nicaragua. A medium-bodied puro, it is composed of all Nicaraguan Habano leaf and is available in four sizes, 5 x 50 Bully, 6 x 50 Toro, 6 x 60 Magnum, and 7 x 52 Churchill. This latter size is of special historical interest, as it was the original Cuban Romeo y Julieta brand that originated the Churchill size. And as for the 1875 year in this cigar’s name, that refers to the year the brand was started in Cuba.

It is well known that Winston Churchill often did his best thinking at night, long after the rest of Great Britain was asleep. And while the famed “British Bulldog” smoked Romeo y Julieta Cubans and drank gin martinis during the day, scotch whisky was rumored to be his beverage of choice in the wee small hours. These two idiosyncrasies were the inspiration for this medium full-bodied smoke, in which the Dominican Visus filler has been slightly revved up by the addition of Nicaraguan Condega Visus leaves that have been aged for six months in Speyside single malt whisky barrels. A dark, Habano Ecuadorian Oscuro wrapper adds a bit of a mellow kick that we think Sir Winston would have liked. The cigars are available in three sizes, 5 x 52 Robusto, 6 x 54 Toro, and of course, 7 x 48 Churchill.