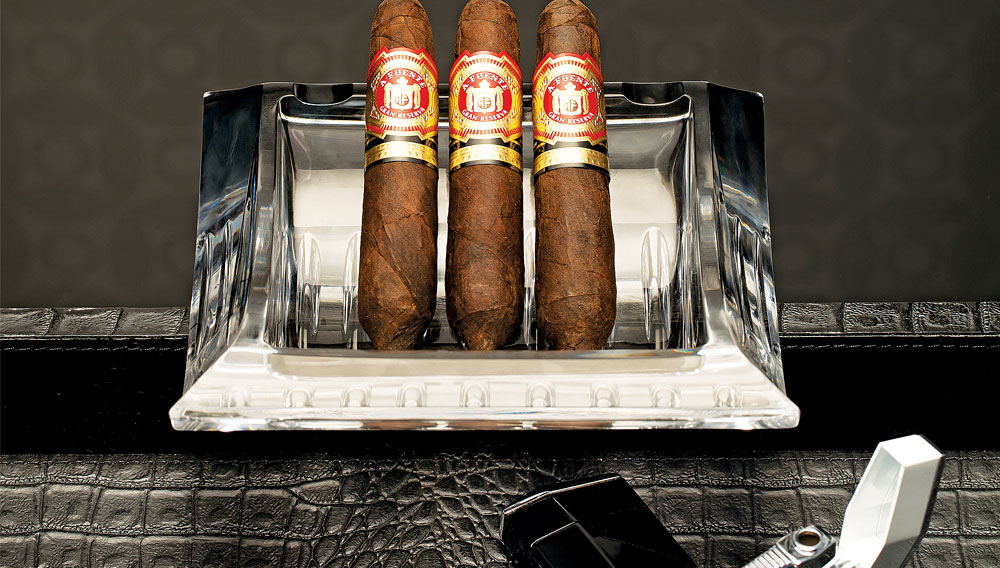 If there is proof that big things come in small packages, it is the Arturo Fuente Hemingway Short Story Maduro ($6.75), a diminutive figurado measuring only 4 inches in length, with a ring gauge of 42/49. This cigar is a muscular bear hug of a smoke, packed with bursts of burned oak, ground espresso beans, and a mesmerizingly spicy-sweet undertaste that repeatedly draws the Short Story Maduro back to your lips for just one more puff. Anyone enjoying it for the first time may be pleasantly surprised to discover that it is easily a 45-minute smoke—and a rival of cigars almost twice its size.

This lengthy time under fire is the result of the Short Story Maduro’s well-cured tobaccos. The dark, leathery maduro wrapper exudes luxury, in spite of the Connecticut broadleaf’s characteristically rough-hewn texture. (Typically, the Hemingway-series cigars have African Cameroon wrappers, but occasionally a maduro version is released as a limited edition.) Maduro wrappers, by nature, must be thick enough to withstand the strain of longer fermentation: The stacks of tobaccos generate natural, compost-like heat, which is part of the curing process. The longer the fermentation, the darker the color, and, as a testament to the Fuente family’s penchant for excellence, the Short Story features only the best blemish-free tobaccos.

The cigar’s all-Dominican binder and filler tobaccos, which also contribute to a longer burn, are grown on the Chateau de la Fuente farm in the Dominican Republic. In the field and in the factory, quality—not quantity—is a way of life for the Fuentes. Only 200 Short Story Maduros were released in 1999 and 2002 combined. Thereafter, production ceased—until late last year, when 1,000 boxes containing 25 cigars each were released to select Fuente retailers.

The Fuentes’ Hemingway-series cigars possess a shape that is difficult to make in any size, and the process of hand-rolling tobaccos in the confining space necessary for the Short Story requires the talents of only the most skillful torcedors. With its rounded head, slightly tapered body, and pinched perfecto foot, the Short Story makes clipping effortless and lighting a one-match affair. The petite powerhouse deserves a gigantic ovation as this year’s Best of the Best cigar.