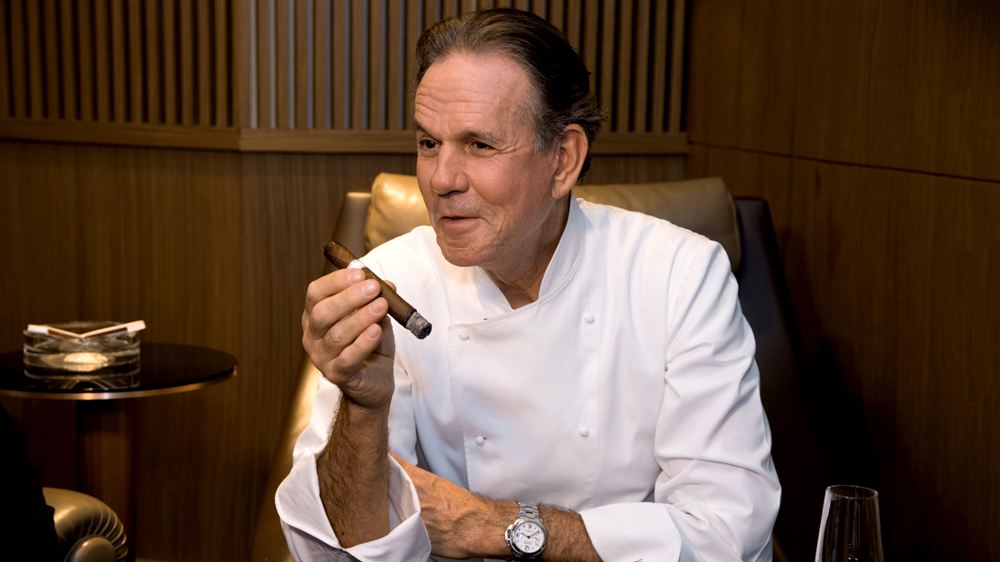 In addition to their culinary expertise, penchant for details, and the ability to maintain a distinctive style, one of the other attributes shared by many celebrated chefs is their enjoyment of premium cigars. This was the basis for Davidoff’s first limited edition Chef’s Edition cigar in 2016. It was a collaboration between Davidoff’s master blenders and six top European chefs—a first in the food and tobacco industries.

This year, to celebrate the 50th anniversary of the now-iconic Davidoff White Band, which was designed by the late Zino Davidoff in 1968, the luxury cigar company has introduced its second Chef’s Edition cigar ($30 each or $300 for a box of ten). What you’ll find inside is a 6 x 54 Toro, limited to just 5,000 boxes and only available at Davidoff Appointed Merchants in the United States and Davidoff flagship stores worldwide.

To create this medium-bodied masterpiece, Davidoff enlisted the talents of five of the world’s most celebrated chefs, all of whom are cigar smokers: Thomas Keller from The French Laundry (which has its own cigar sommelier), Bouchon and Per Se in the United States; Alvin Leung from Bo Innovation in Hong Kong; Klaus Erfort from Gästehaus in Saarbrucken, Germany; Heiko Nieder from The Restaurant in Zurich; and Shaun Rankin from Ormer Mayfair in London. Among them, these culinary celebrities boast a total of twelve Michelin stars, with Thomas Keller accounting for seven of them (three for The French Laundry in Yountville, one for Bouchon in Yountville, and three for Per Se in New York).

The tobaccos selected for the 50th Anniversary Davidoff Chef’s Edition not only embody influences from the Dominican Republic, where the cigar is made, but also from the chefs’ home countries of the United States, Germany, Switzerland, Great Britain, and Hong Kong. After the first puff, licorice, oakwood, Szechuan pepper, and leather gradually give way to more pronounced intensities of coffee, cumin, and creamy chocolate. It offers sweet and spicy undertones, followed by gentle end notes of eucalyptus. All of this is the result of a deep espresso-brown wrapper from the Dominican Republic, a Negro San Andrés binder from Mexico, and a filler of Dominican (Piloto Visus, Visus, Yamasá Visus, San Vicente Mejorado Ligero) and Nicaraguan (Estelí Visus) tobaccos.

“One of the main things all of us wanted to achieve was a cigar that could be smoked throughout the day and in the evening,” said Chef Keller, “because for a chef there’s no set time when you can sit down and smoke a cigar. It may be early in the morning; it may be late at night.  For me, it may be on the golf course in the afternoon. So we wanted a cigar that gave us the opportunity to enjoy it anytime.”

To achieve this goal, each of the chefs visited the Davidoff cigar factory and tobacco fields in the Dominican Republic and both individually and collectively, went through a familiarization process of cigar blending.

“We had a lot of guidance,” admits Keller. “I mean after all, we are chefs. We wouldn’t presume to come to the (Davidoff cigar factory) and tell them how to make a cigar any more than they would come into our kitchen and tell us how to cook a steak.”

The Davidoff master blenders then took the individual flavor profiles each of the five chefs had suggested and created a series of test cigars for them to smoke.

“It came down to having four cigars in the final choice for us,” Keller recalled. “And four out of five of us chose the same cigar. The most fascinating part of blending this cigar to me was the fermentation of the tobaccos, which creates all these different textures and flavor profiles and the viscosity of the smoke. That’s why when people ask me what I like to drink while smoking a cigar, I tell them for me it’s an aged tequila, with those nuances of caramelization and that little sugary sweetness that comes from the barrel.”

Which is why, at the October 4, 2018 launch of the Davidoff 50th Anniversary Chef’s Cigar (during a six-course dinner served in the recently redesigned garden area of The French Laundry), the Gran Patrón Piedra Extra Añejo, the Patrón Burdeos Añejo, and the Patrón en Lalique Series 2 Extra Añejo were served alongside the cigars, much to the approval of those in attendance, and under the watchful supervision of Chef Keller.