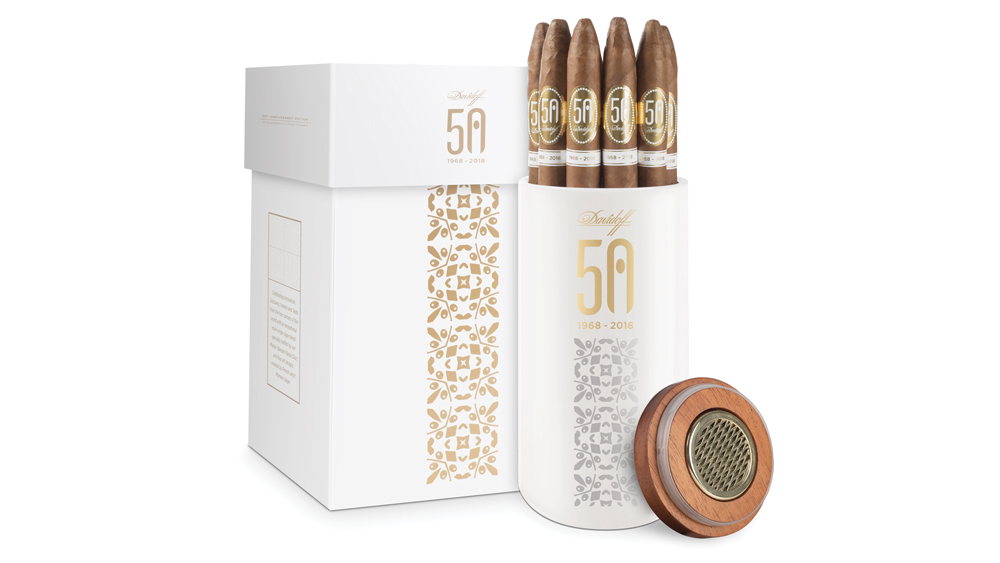 In 1968, Russian-born Zino Davidoff—whose well-stocked tobacco store in Basel, Switzerland, had already made him an internationally known purveyor of Havana cigars—was given permission by the Cuban government to establish his own brand. Rather than emulate the colorful bands historically used for Cuban cigars, he opted for a minimalist white oval band with his name in gold script. Even though Davidoff cigars are now produced in the Dominican Republic, the original band remains nearly unchanged and has become a mark of quality among premium cigars.

This year, to celebrate the 50th anniversary of what is now called the White Band, Davidoff has reintroduced a limited edition classic Cuban shape, a 6 ¾ x 50 Diademas Finas. It is an appropriate choice, as in 2006 an unbanded Diademas Finas – with a different blend – was selected to celebrate the 100th anniversary of Zino Davidoff’s birth. But the new banded 50th Anniversary Diademas is a completely different cigar. With its Ecuadoran Habano wrapper, Dominican Olor Seco binder, and 10-year-old Dominican fillers, the cigar’s creamy smoke intertwines around milk chocolate and honey sprinkled with black pepper and a touch of ginger.

The limited-edition cigar comes packed 10 per individually numbered porcelain canister ($360) decorated by French artist Mariane Leger, who used her delicate, laser-enhanced techniques to create four distinct patterns. Each was inspired by the four corners of the world—Americas, Asia, Europe and the Middle East—and reflects Davidoff’s ongoing goal to produce an international range of extraordinary cigar experiences.

Also available will be a limited-edition “Caves du Monde” humidor designed by Leger, in gold-inlaid sycamore, birch, or walnut; and a 50th-anniversary lighter. If you missed out on Davidoff’s limited-edition year of the dog celebration, be sure not to make the same mistake twice.

Only two thousand porcelain humidors of each of the four designs will be made, for a total of 8,000 humidors.