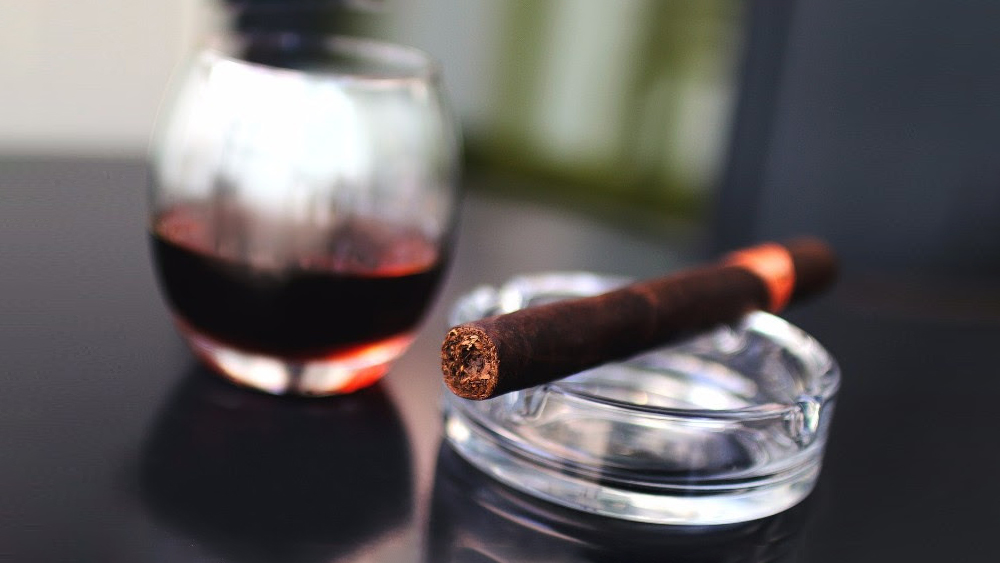 Located in picturesque and historic Georgetown, the comfortably luxurious Four Seasons Washington, D.C. has achieved a number of “firsts” since it opened in 1978. For one thing, the hotel’s award-winning restaurant, Michael Mina’s Bourbon Steak, was the first fine-dining establishment in the city to have a no-jacket policy. Also, the restaurant’s popular booth Number 105 is clandestinely designed to shield high-profile government officials from being observed while dining. Applying a similar Hollywood-style technique, the hotel’s more casual Season’s Restaurant boasts a hidden celebrity entrance.

Adding to the hotel’s appeal to both locals and visitors is the spacious open-air patio, with its comfortable seating and fire pits. But what makes this serene area of special interest to cigar smokers is Bourbon Steak’s new Sip and Smoke program, with the restaurant’s humidor offering a variety of premium cigars to pair with some of their specialty cocktails. Moreover, adding yet another first to its list of accolades, the Four Seasons D.C. is the only hotel in the multinational chain to have its own cigar sommelier.

We ordered a BSDC Manhattan (made with D.C.’s locally produced One Eight Distilling’s 120-proof bourbon), fired up a Davidoff Series 702 Aniversario No. 3 from the Bourbon Steak humidor, and chatted up Four Seasons’ cigar sommelier Mason Foster about what it’s like being a cigar sommelier in a non-smoking town.

You stock a nice range of premium cigars with varying strengths, going from the Avo Classic No. 9 to the Padrón Family Reserve.

Yes. The box-pressed Padrón 1926 Series Family Reserve was the very first cigar I smoked at Georgetown Tobacco. It’s a Nicaraguan, and it will put you on the ground if you are not ready for it. And I was not ready for it. But I felt that was part of the challenge. With wine or spirits, it’s never the first drink. It’s something you have to train yourself for and acclimate to, so I knew there would be a learning process involved. And as long as you don’t inhale, it’s going to be a good time. 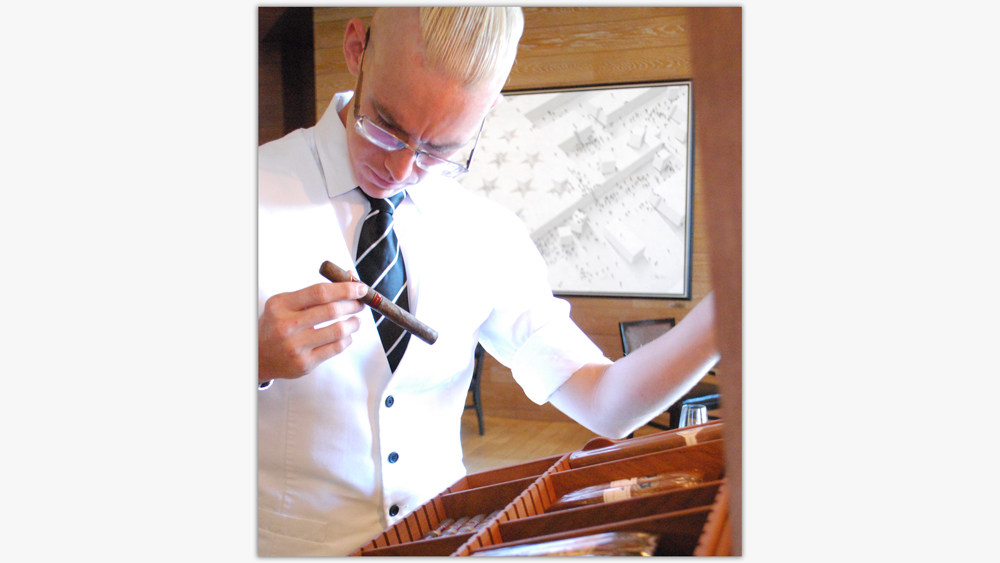 Do you change your cigars with the seasons, like they do at Bourbon Steak with the dinner and bar menus?

Yes, depending on what we have and what’s coming out. You’ve got to have variety. You can’t build a cigar list with nothing but Nicaraguan cigars, for example. Most people who have a cigar after dinner at Bourbon Steak are novices—which is perfect because then I have the opportunity to set these people up for enjoying a cigar now and in the future. For example, I’ll say, “Why don’t you step out on our patio, and I’ll bring a cigar and whiskey pairing for you?” And that’s their opportunity to say either “It’s not for me” or “Okay.” But at least you have a conversation going that may result in discovery.

We’re also putting together an anniversary package, where we offer a 50 mL bottle of Champagne or rum and a cigar to pair with it. You can come to our patio at any time during your stay here and enjoy both, or save the cigar for later, as we offer it in a protective plastic tube with a ribbon around it. I’m trying to change the mind-set about cigar pairings. The classic thinking is that cigars are best paired with whiskey and scotch, but I also recommend gin, tequila, Champagne—even Pinot Grigio. You have flavor profiles within the cigar that are also within the whiskies and wines themselves.

Pairing is the magic word because everyone wants to know what drink goes with what cigar.

Absolutely. When people come to a Four Seasons or a Michael Mina restaurant, their expectations are high. And our job is to provide context. So when that spark is ignited, you’re able to provide enjoyment within that context.

To have a cigar sommelier at one of the finest restaurants in D.C.—the legislative and judicial seat of our nation where many anti-smoking laws are drafted—seems like a clever piece of irony. How did all this come about?

I started smoking cigars 2 years ago when I came to the Four Seasons in Washington, D.C. When you start working at Bourbon Steak, there is an extensive 4-week training program, and at the very end, you take a 5-hour written examination and a 45-minute oral examination. I made it through the written part no problem, and then I got to the oral portion, and my last request from the general manager of the restaurant was, “I see we have some cigars here at Bourbon Steak. Tell me about them.”

I had not a word to say. So I took that page and went down to Georgetown Tobacco, just up the street from us, and bought each one of the five cigars on the list. Every day, I smoked one and talked with the experts at Georgetown about each one. And through that experience, by the end of that week, I had entered the realm of the cigar-smoking community. I eventually became a certified cigar sommelier through the online Tobacconist University of Princeton. 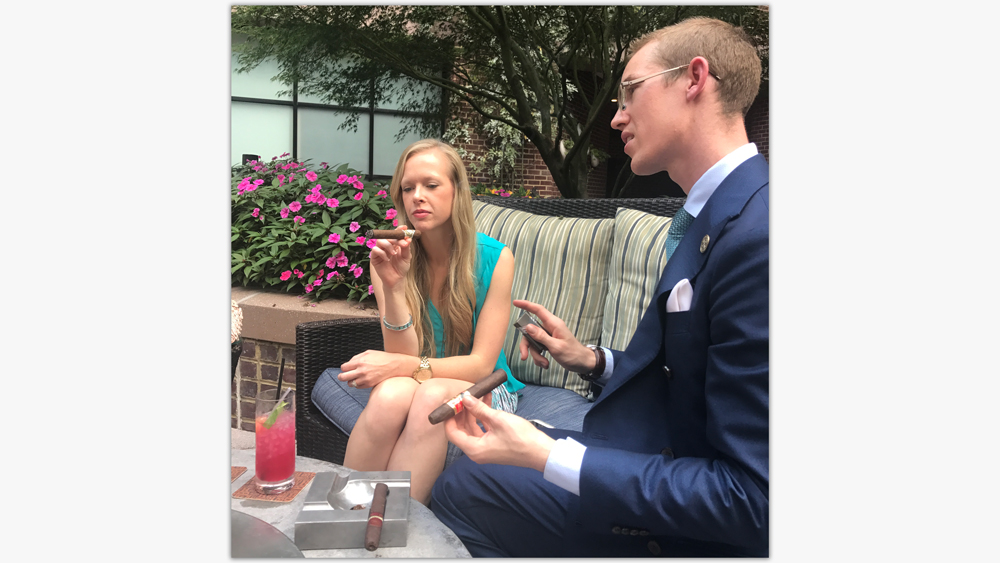 What was it about cigars that drew you in?

It was not only the cigars but also the compassion and the passion that the cigar smokers at Georgetown Tobacco had. In D.C., it’s very much a “What do you do?” type of environment, and that will be asked before anyone says, “How are you?” But entering a cigar shop such as Georgetown Tobacco, that is the question you don’t ask because you’re there smoking cigars with military members, CEOs, the top lawyers in D.C.—high-profile individuals like that. But when you walk in, all that matters is who you are as a person, not what do you do.

Cigars do break down social and economic barriers. How did you go from beginner cigar smoker to the key expert at the Four Seasons Washington, D.C.?

Every year, we change the cigar list, and after 6 months of cigar smoking, I started training the staff on the cigars that we offer. We have wine sommeliers, and we have bartenders who can recite the entire history of liquors. The chef comes out and talks to customers about the farms where his steaks come from. But cigars just seemed like something extra. So I gave a class to the restaurant staff on the cigars we carry, and when we went to refresh the cigar list the next year, I asked the GM if I could take this role on. So now, along with the wine sommeliers and the bartenders, the restaurant has someone who can talk to customers about cigars.