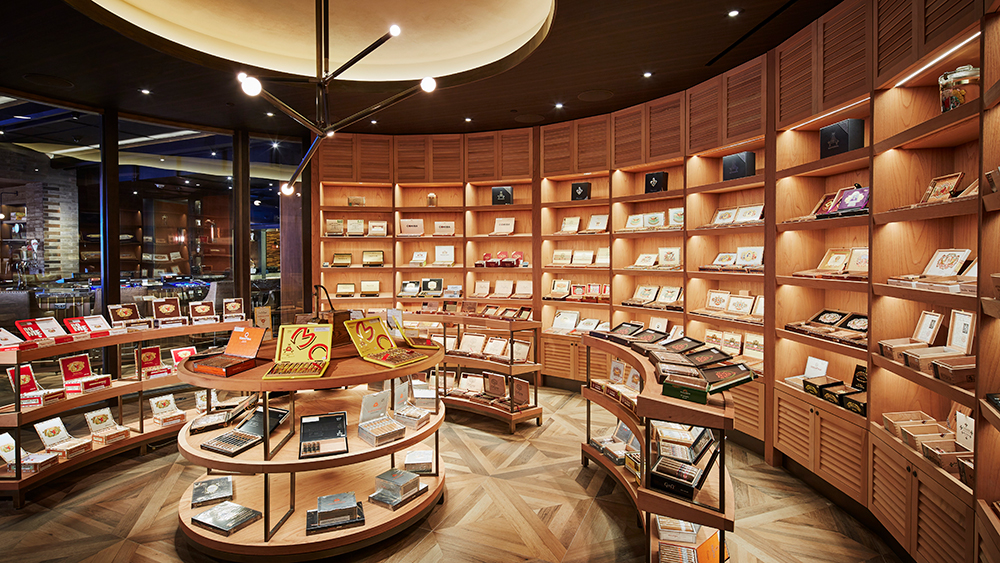 “No mask, no sanitizer—no cigar.”

That might very well be the sign that could have been posted over the entrance to every cigar bar on the Las Vegas Strip since June 4, the date that Nevada’s Governor Steve Sisolak gave the “Phase Two” go-ahead for Las Vegas to reopen its casinos and restaurants after an 80-day Covid-19 shutdown. Since then, it has been a different—and challenging—world for the Strip’s cigar lounges.

MGM Resorts International was the first to cautiously open three of its casinos, including MGM Grand, the home of Whiskey Down and its well-stocked cigar bar. Next came Caesars Entertainment, the first to require that everyone must wear a mask when entering their Las Vegas properties (even its Julius Caesar stature sports one), which includes Caesars Palace and its celebrated Montecristo Cigar Bar. Within hours, MGM Resorts issued a similar statement, requiring masks for all guests and visitors.

Previously, Nevada state law only required employees, not customers, to wear masks. But on the evening of June 24, right after the implementation of these new “no mask, no service” policies by the two largest resort-casino conglomerates on the Strip, Sisolak issued an expanded ruling that now mandates masks must be worn in all public buildings and outdoor spaces.

The new rulings present unique challenges for Las Vegas cigar lounges. Such as, when are you actually allowed to remove your mask and who is tasked with enforcing the regulations? What is the protocol for handling that cigar you’re thinking about purchasing? Plus, isn’t the traditionally simplistic act of blowing clouds of cigar smoke an invitation for any potential coronavirus germs to become airborne?

The bars are doing what they can to mitigate spread of the virus at their properties. They may point to the fact they’re equipped with ionized air filtration systems, but there’s been no solid scientific evidence that this technology decreases the likelihood of transmission. The lounges are practicing social distancing, a required protocol made easier by the fact that relatively few tourists have returned to Las Vegas, even after Nevada’s Phase Two went into effect.

“Our cigar business overall is down by 50 percent and even with the reopening, foot traffic in many casinos is down by 90 percent,” says Michael Frey, a partner in the Montecristo Cigar Bar as well as Caesars Forum’s Casa Fuente cigar bar.

After an initial pre-shutdown, cigar-buying frenzy by customers stocking up on smokes to prepare for an unknown future, the cigar business in Vegas was snuffed out by the shutdown. As a result, some lounges, like Rhumbar’s cigar bar at the Mirage, have taken the same tact as many Las Vegas restaurants and remain closed. Others, like the Cigar Box, which is owned by Frey, have limited their services to pre-arranged pick-ups.

“The business climate is very difficult, due to the overall challenges facing Las Vegas,” says Matt Arcella, owner of the Davidoff of Geneva Cigar Bar at Fashion Show Mall. “After all, we are a tourism and convention-based destination and June is always a soft month anyway. But when compounded with a lack of visitors to Las Vegas [due to the virus], plus no sports, high temperatures, no conventions and social distancing parameters, revenue overall is a fraction of historical performance.”

The few other lounges that are open have adapted in various ways. A designated employee at the Montecristo Cigar Bar greats each customer, who had been temperature checked when they entered Caesars Palace, with a healthy dollop of hand sanitizer before they enter. And with half of its couches, tables and chairs now removed, that leaves plenty of space within this club’s 4,000 square foot expanse to easily maintain the 50 percent occupancy requirement. Although masks must still be worn in the bar, they may be removed while smoking a cigar. Only a limited number of people are allowed in the one-thousand cigar, glass enclosed walk-in humidor at a time. However, customers are no longer allowed to physically pick out their cigars. That is done for them by a staffer, who will put the cigars on a tray, take them to the cash register, ring up the sale and then give the cigars to the customer. After each transaction, the register is wiped down with a sterilizing cloth.

“We have cutters for the guests to use, which we sanitize after each use,” says David Chiti, general manager of the Montecristo Cigar Bar. “If they insist on our team cutting their cigar for them, then we will, after sanitizer has been applied. We also offer wooden matches to all guests, or we will light their cigars for them.”

At Casa Fuente at The Forum at Caesars Palace—the only place in The Forum shopping arcade where cigars may be smoked—every other seat at the colorful Cubanesque bar has a sign stating, “This chair is out of service.” Half of the tables also display “out of service” signageand guests are not permitted to select their own cigars from the walk-in humidor that contains such rarities as the Fuente Fuente OpusX and the Casa Fuente brand itself; that is done for them by an employee.

But with Nevada’s recent surge in new Covid-19 cases, the specter looms of another possible Las Vegas shutdown, which would include the casino resorts and, of course, their adjacent cigar bars. Citing the massive amounts of money that has been lost by the shutdown thus far, Brendan Bussmann, director of government affairs for Las Vegas-based Global Market Advisors told the Las Vegas Review-Journal, “Las Vegas casinos probably will do all that they can to avoid shutting down a second time.”

Nonetheless, on June 29, Sisolak signed an executive order extending Phase Two through the end of July. He further stated that he “will not hesitate to take any action necessary to protect the public…including reinstituting previous restrictions.”

But for now, Las Vegas is still smoking.