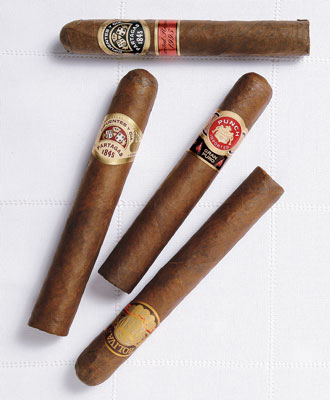 In a field of broken stalks stands General Cigar president and chief operating officer Daniel Núnez. Scattered bits of stems and leaves, still showing faint traces of green, indicate that this ground recently hosted a substantial crop of tobacco. Yet although every last twig has been stripped of its precious commodity, the field remains full of life. Thousands of tiny plants, which would have been invisible under the lush, head-high tobacco crop, hug the ground. Nú–ez plucks a pod from one of them, breaks it open, and drops a few beans into his hand. “We’re rotating the crops here, just as farmers have done for centuries,” he explains. “The beans help restore the soil between the tobacco crops. This way, we can stay away as much as possible from using chemical fertilizer.

“If you use chemical fertilizer,” he continues, “you get huge plants, and they grow fast. You can get thousands of pounds of tobacco per acre. But you lose the flavor.”

The 1,000-acre tract on which Núnez stands lies near the town of Mao in the middle of the Cibao Valley, the legendarily fertile central region of the Dominican Republic that is home to countless tobacco farms, banana plantations, and other agricultural operations. The Mao Farm serves as a kind of laboratory for General Cigar, maker of Hoyo de Monterrey, Macanudo, La Gloria Cubana, Partagas, and many other brands. Here the company can experiment with the growing and processing of tobacco. Over the last few years, the work of the 12 staff agronomists who manage the farm has led the company away from state-of-the-art, high-yield methods and back toward techniques employed during the middle of the 20th century. This was an era when a tobacco farmer’s idea of a technological breakthrough was a good, reliable tractor.

“We have found that by going back to older, more natural methods, we produce a more flavorful cigar,” says Núnez, who earned a degree in agricultural engineering from Texas A&M University before beginning his career with General Cigar 33 years ago. He was elevated to his present position last year when Swedish Match acquired General Cigar from the Cullman family.

The results of the Mao Farm experiments can be sampled in several of the company’s recent introductions, including the reformulated Bolivar (one of the cigars featured in Robb Report’s Best of the Best 2006 issue), the Partagas Limited Reserve Decadas, and the Punch Gran Puro.

The project began in 1994, when the company planted a trial crop of 300 plants using a seed variety dating to the 1940s. “Growers abandoned this seed and switched to Piloto Cubano because they could get better yields–2,000 pounds per acre instead of 1,400,” Núnez explains. “But the older varieties produced a better-tasting tobacco.”

General Cigar acquired the decades-old seeds from the Tobacco Institute, a state-run facility and organization that conducts research on growing and processing the plant and provides other assistance to the Dominican Republic’s tobacco-growing industry. The institute is located in the city of Santiago, the nexus of Dominican cigar manufacturing. “Seeds last many, many years if kept in good condition,” Núnez notes. General Cigar first used leaves from the experimental crop in 1998, in the Macanudo Robust. They later became a key component in the critically acclaimed Partagas Black Label–one of the company’s finest efforts of the last few decades.

After a brief ride through more freshly harvested tobacco fields, Núnez stops his white SUV in front of a row of thatched sheds, each one measuring about 150 feet long and a little more than 20 feet high. Ignoring these structures for the moment, Núnez points to a row of much shorter sheds, with eaves that descend below the top leaves of the tobacco plants surrounding them. “See those sheds in the distance? That’s the traditional way to build a drying shed. This is what we’ve gone to now,” he says, gesturing toward the taller shed we are standing alongside.

He opens the barn doors and leads the way into a dark corridor, where it is hot and damp enough for fog to form on his guest’s eyeglasses. Thousands of tobacco bundles, each containing 10 leaves tied together at the stem, fill most of the shed, which is the first stop for the leaves after they have been picked. They will dry here for about six weeks, losing most of their green color and beginning to take on the appearance of the tobacco that you find in cigars. “With these taller sheds,” Núnez continues, “the tobacco is farther off the ground. We’ve also designed them so we have better control of the breeze flowing through them. Now, the tobacco doesn’t get damaged as much by strong breezes.”

According to Núnez, the new shed design helps compensate for the lower yield of the older plant varieties and retro farming methods. “Before, only about 35 percent of the leaves we picked ended up being usable for cigars,” he says. “Now it’s about 60 percent.” For emphasis, he plucks a leaf from one of the bundles and wraps it around his lit cigar. The supple, golden leaf burns evenly at the tip of the cigar, just as it should.

The tour continues with a visit to a row of sheds that are made from corrugated metal and that stand nearly twice as tall as the thatched sheds, allowing for even more efficient drying of the tobacco leaves. The first one we enter is a maelstrom of activity–a sharp contrast to the peaceful green fields surrounding it. Dozens of workers are bundling freshly picked tobacco leaves and placing them in large bins. Another crew is ascending the scaffolding inside the shed with the speed and surety of Cirque du Soleil performers. Pairs of workers hoist 10-foot-long strings of tobacco bundles toward the shed’s ceiling. Núnez points out the ventilation windows running along the sides of the building. Because these windows and the barn doors at the front and rear of each shed are the only places for air to enter or leave, they facilitate more precise control of airflow than a thatched shed, which is far from airtight.

A nearby group of buildings–these constructed from cinder block and lumber–is the next stop for the leaves, after they finish their stay in the drying shed. The leaves will spend far more time here than in the sheds. Each building contains several long rows of tobacco stacks; a quick calculation tells the visitor he is looking at a few million leaves of tobacco. “We’re doing more aging now of the tobacco, as most cigar makers did many years ago,” Núnez says. “Not only does it improve the flavor, it makes the cigars more consistent from year to year. Every bale gets a minimum of three years’ aging.” Three years is not unusual for premium cigar tobacco, but one or two years of aging is more typical.

A tour of Mao Farm is not complete without a stop at the animal pens–a feature common to subsistence tobacco farms of the past but rarely, if ever, found at corporate farming operations. We see a large chicken coop filled with feisty birds streaked with black and red feathers, a pond floating a flock of ducks, and even a goat pen and a pig wallow. Why, Núnez is asked, is a cigar company raising livestock? “It feeds the families of the workers here,” he explains. “With the livestock and the crops that we rotate in between tobacco plantings, we can support 800 families on this farm. We produce everything they need for food–and at the same time produce a better tobacco crop.”

General Cigar is now exporting the techniques developed on the Mao Farm to its growing operations elsewhere, and it is encouraging the independent farmers from whom it purchases tobacco to adopt more natural methods.

When asked what new products and tastes the Mao Farm project might yield in the future, Núnez declines to specify. “The tobacco will tell you what to do,” he says. “I don’t think our schedule goes beyond 24 hours.”