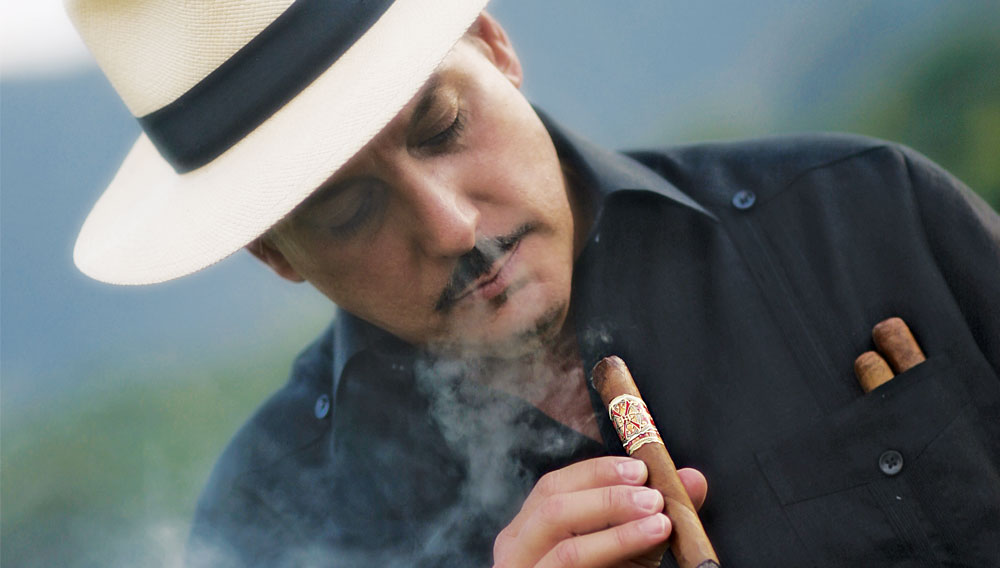 Like many in the cigar business, Carlos Fuente Jr. traces his lineage to Cuba. In 1912, his grandfather Arturo came from that country to Florida, where he founded what is now Tabacalera A. Fuente y Cia. Under the direction of Carlos Jr. (who prefers to be called Carlito), the business produces 30 million cigars a year at its factories in the Dominican Republic, making it the world’s largest privately held company for handmade cigars. While increasing the brand’s production, Carlito has also built its cachet by creating OpusX and other limited releases, developing a tobacco farm inspired by a French château, and packaging cigars with distinctive boxes and bands.

Today there is so much more in the way of luxury—in consumables, in jewelry, in the things that people just love to look at, whether it’s fabric, fine jewelry, or artwork. There seems to be more awareness of luxury, which is all around us. In many ways, cigars are a modern luxury. They go back over 500 years, but they really became evident during the 1990s, when Wall Street was at its peak and young executives began seeing them as a luxury item. At the same time, premium cigars started being developed in a way that had never been seen before. Thus, beautifully constructed, high-end cigars became a way of life and have since become collectable for people who seek out the very finest things—just like fine watches, fine wines, and vintage automobiles.

We specialize in making very rare cigars, with special tobaccos and special shapes, and that all started when we began making cigars to auction off for charities such as our Cigar Family Charitable Foundation. That, in turn, started the modern trend of collecting cigars, over and above just aging them. Most of the cigars that I make today are designed for long aging. They’re heavier bodied and hand-rolled with very complex tobaccos. They are already well aged before they’re released, but after that, they continue to develop and change.

A rare cigar will become collectible because it is made in small batches. For example, there’s the Lost City, which we made from tobacco originally planted as a late-summer crop just so my friend Andy Garcia could use it as a background for his movie The Lost City. When he finished shooting, he suggested we use these tobaccos to make cigars banded with the Lost City logo to benefit our foundation. We ended up aging the tobacco for five years, and the cigars are superb. Other cigars—like our 100th-anniversary cigars, which are just coming out—have a specific meaning. Last year, a warehouse fire destroyed a lot of the tobacco we were going to use for our 100th-anniversary cigars, so we postponed them and now look at 2013 as the first year of our second century. With cigars such as these, most collectors will date them and put them in humidors for further aging.

I consider making cigars very much like being an artist. We don’t do things to fit a market trend, because once you do that, you’re a follower. Instead, I believe in creating a trend, just like an artist takes different colors or textures and creates something that no one else sees. We also respect and honor the traditions of generations before us by trying to take those traditions to another level. Every time you’re able to achieve this, you find a way to do something that’s a little more intense, a little bit bolder. This is what I love. It’s the passion that runs through my veins.

The world is becoming a single entity, and even though the cultures may be different, human beings have similar tastes. A great cigar is a great cigar—simple as that. It has complexity, balance, and sweetness.

Even though the market is growing, our principles and integrity are nonnegotiable. It’s not like we’re buying man-made commodities that can be produced in greater quantities to meet greater demand. We walk a very fine line using natural products like tobaccos. Ours come from a specific estate, Chateau de la Fuente, which can produce only a limited amount of tobacco. So as these global markets open, our cigars will become more difficult to find and even rarer. We are a family company, family owned and run, and regardless of the pressure to produce more cigars, there are only so many we can make in a day and still maintain our quality.

A Matter of Taste

Luxury in general brings people together to share their passions, but one thing that distinguishes cigars from, for example, fine jewelry and automobiles is that you can taste them. With a cigar, you use all the senses—for the aroma and the flavor of the smoke, the beauty of the tobacco, the way it feels in your hand. A cigar even has a sound of its own, because it inspires conversation.