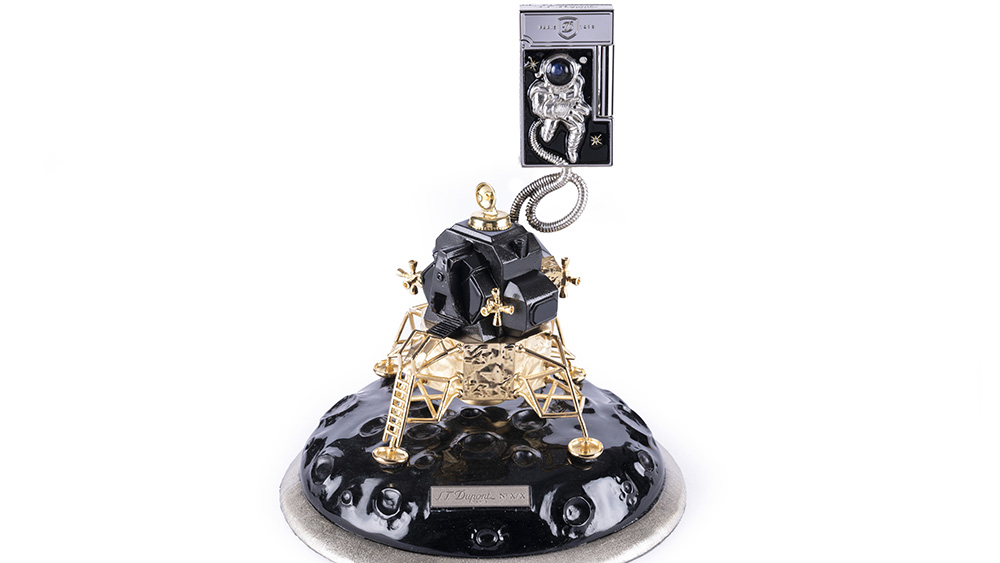 As any astronaut can tell you, smoking inside a pressurized space capsule is probably not a good idea. But today, for earthbound cigar aficionados wanting to celebrate the 50th anniversary of the July 20, 1969 first manned lunar landing, the Parisian design firm of S.T. Dupont, in collaboration with bronze casting designers 2Saints and master gem artisan Luis Alberto Quispe Aparicio have created a pair of out-of-this world collectibles—two remarkably detailed cigar lighters—under the celestial dome of the Apollo Collection.

To put the Apollo Collection in perspective, the Apollo 11 spacecraft consisted of three parts, the command module “Columbia,” a service support module, and a lunar module known as the LM (and often referred to as “Lem”) but, inspired by NASA’s logo for this space mission, was nicknamed “The Eagle.” The command module provided living quarters for the astronauts: mission commander Neil Armstrong, the command module’s pilot Michael Collins and Edwin ‘Buzz’ Aldrin, the lunar module’s pilot. The service support module contained the main spacecraft’s propulsion system and also supplied the Columbia with electrical power, oxygen, and water, while the Lunar Module was a two-person craft used by Armstrong and Aldrin on July 20th to physically land on the Moon.

Of these three modules, the command module (the only part of the Apollo spacecraft that returned to Earth) and the Lem have been meticulously replicated in miniature as individually numbered limited editions of eleven each. Fashioned of precious metals and jewels, each houses a limited-edition commemorative S.T. Dupont L2 lighter. It took more than 500 hours to handcraft each miniature module.

The cigar lighter replica of the Columia command module.  Courtesy of S.T. Dupont

The command module is meticulously cast in bronze and hand patinated with a plaque bearing the signatures of Armstrong, Aldrin and Collins, along with that of President Richard Nixon. The module’s removable hatch reveals an individually numbered Apollo Prestige Line 2 double-flame lighter, finished in pink gold and encased in hand patinated bronze. In addition to the eleven modules and their matching numbered lighters priced at $38,000 each, there will be 69 individual lighters, without the modules, priced at approximately $5,500 each (lighter prices were not finalized at press time).

The more intricate Lem ($39,480 each) consists of a gold-plated duplicate of the landing craft’s skeletal structure supporting an obsidian replica of the module itself, all of which rests on a silver obsidian “moon crater” base. The top hatch of the module opens to reveal a glass tube containing an actual lunar meteorite, which comes with a certificate of authenticity. The accompanying L2 double-flame lighter features front and back sculpted views of a solid silver astronaut surrounded by lapis lazuli, diamond and rock crystal “planets.”  The lighter itself, which “floats” above the module via a silver oxygen hose, can be purchased separately (without the Lem sculpture) for $9,445.

All of the Apollo 11 items can be personalized and may be ordered by contacting Sara Tio (sara.tio@davidoff.com).