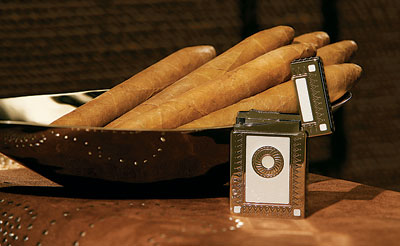 Zino Davidoff no doubt would have enjoyed smoking the meaty and spicy cigars that his namesake company made to celebrate the 100th anniversary of his birth. The limited-edition Diademas Finas and the even more exclusive Diademas 100, which Davidoff officially will introduce July 18 in Las Vegas at its St. Mark’s Square store in the Venetian, contain aged Dominican Republic tobaccos that, it has been said, were blended to emulate the strength of the pre-Castro Havana Punch—a brand that represented Cuba’s cigar-making heyday.

Davidoff, who died in 1994, was the first non-Cuban permitted to export private-label Havana cigars, but that relationship ended in 1989, when he declared that Cuba was no longer capable of producing the quality he demanded. He underscored his proclamation by publicly burning a reported $3 million worth of Havana-rolled Davidoffs. Since then, the brand, which is owned by Switzerland’s Oettinger Imex AG, has been making Davidoff cigars in the Dominican Republic.

The Diademas Finas, which, like the Diademas 100, was created by Davidoff master blender Hendrik “Henke” Kelner, is a 63¼4 x 50 unbanded perfecto that appears similar to the first Cuban Diademas that Davidoff introduced in 1948. Davidoff will sell the cigar, which it will produce only through the end of this year, in boxes of 10 priced at $220. The box features a 1940s sepia-toned photograph of a nattily attired Zino standing in front of his Geneva store.

The Diademas 100 is a 91¼8 x 55 version of the Diademas Finas. Although it has the same perfecto shape as the Finas, the larger size of the 100 requires an entire half of an unblemished tobacco leaf for each wrapper. “This is a very difficult, old-style shape to make, which is why you won’t find many of them on the market,” Kelner said during a March 11 black-tie event in Geneva to celebrate what would have been Zino’s 100th birthday. “But we picked it to show that Davidoff can make it. Still, we can only roll 100 a day, and even then, they can be made by only our most skilled torcedors.”

The Diademas 100 will be sold in 50-cigar bundles (called wheels), tied with a silk ribbon, and packaged in a cedar cabinet box. Unlike the Finas, the 100 is available only at Davidoff shops, of which there are seven in the United States (two in Manhattan and five in Las Vegas). Davidoff is allocating only 100 boxes of the Diademas 100, priced at $2,300 each, for this country.

Although the company will not divulge the ingredients for the Diademas cigars, Kelner told me at the Geneva party that both cigars use the same tobaccos and that each filler is Dominican and comprises five different tobaccos blended in equal proportions. The binder of the Diademas 100 is made from 1992 and 1993 vintage Dominican, two of the best harvests on record. “It’s not only because of the special quality of this tobacco that we used it,” said Kelner, “but also because it has a sentimental value, because maybe Zino actually touched some of the leaf with his hands. But the real difference between the Diademas Finas and the Diademas 100 is the age of the tobacco crop we used.  The Diademas Finas tobaccos are aged from three to four years, but with the Diademas 100, the tobacco has from seven to 13 years of aging.”

When I asked him about the wrapper, which is silky smooth, oily, and deeply tanned from years of aging, Kelner was not so forthcoming. “We don’t like to talk about the wrapper,” he said with a smile. “After all, we must have our secrets. This is a special wrapper that we have saved and aged, and now we use it for Zino’s cigar. When you have a harvest of tobacco like this one, and you find you have such a beautiful crop, you maintain the best of that crop for a special occasion.”