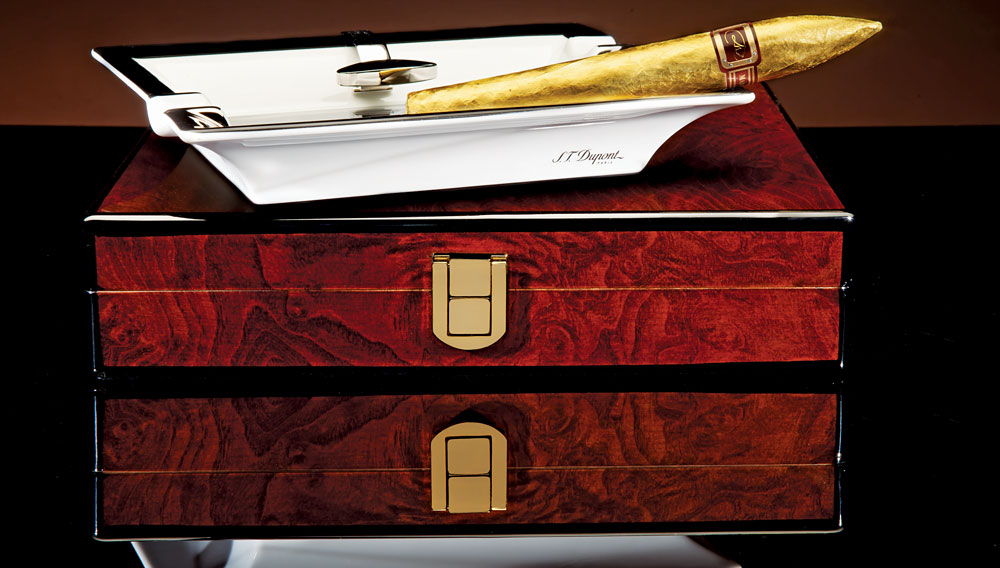 It is an axiom that as much as 80 percent of a cigar’s flavor comes from its wrapper. But what if that wrapper were made of pure gold? That was the burning question at last year’s International Premium Cigar & Pipe Retailers trade show, where an aura of excitement surrounded Daniel Marshall’s booth. Even the most jaded tobacconists gathered round to gawk at a golden cigar showcased among Marshall’s “one thousand coat finish” humidors. For years, Marshall was strictly a California-based maker of handcrafted, precious-wood humidors. Then, in 1995, he started a line of DM premium cigars.

But his new 24-karat DM 2 Gold Torpedo is something else entirely: Marshall painstakingly applies sheets of 24-karat Florentine gold leaf—made by Giusto Manetti Battiloro, one of the world’s oldest gold-leaf manufacturers—to the surface of his Red Label cigar. He chooses only cigars with the smoothest wrappers to highlight the soft sheen, and takes 45 minutes to roll the gold onto each cigar, a process that includes carefully sandpapering the wrappers beforehand to make them even smoother. He makes just one size: a 6¼ × 54 torpedo priced at $200 each. (He is also offering five gold cigars in a signed and numbered burlwood desk/travel humidor for $1,000.)

Firing up a Gold Torpedo is indeed a departure from the normal cigar experience. Before the first puff, there is a certain trepidation in clipping the golden perfecto tip and watching it tumble into the ashtray. Lighting is best done with the hotter flame of a butane torch, because of the high flashpoint of gold compared with the relatively instant combustion of tobacco. After a slight flaring of the metal encircling the foot, the gold that does not burn away quickly melts onto the wrapper. The cigar itself, a Nicaraguan puro, consists of a full-bodied Jalapa filler blend, a milder Estelí binder, and, underneath the gold leaf, a rich Cuban-seed wrapper that has been aged five years. The cigar is hand rolled in Nicaragua under the supervision of Manuel Quesada, using tobaccos grown by Nestor Plasencia. Its rich flavors brim with coffee intermixed with cinnamon and a hint of citrus in the finish.

However, while tobacco breathes, gold does not. Thus, the burn rate of this otherwise easy-drawing cigar is impeded, requiring numerous relightings or constant puffing, which makes the tobacco smoke hotter and reduces the panache factor a bit. Surprisingly, the gold leaf does mellow the flavor, but the greater effect is certainly the statement of smoking a 24-karat cigar right down to its fine, golden ash.