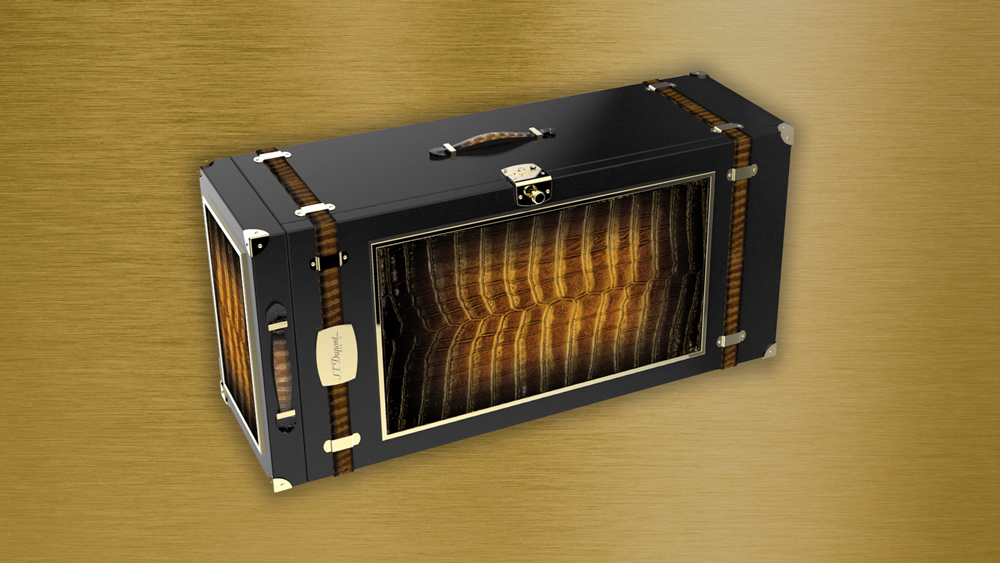 This year marks the 145th anniversary of S.T. Dupont, a company known for its ultra-luxurious lines of leather goods, writing instruments, and smoking accessories. It’s also known for a clientele that encompasses icons of business and fashion, not to mention celebrities and royalty.

To celebrate this momentous occasion, the Parisian company has returned to its roots, when in 1872 Simon Tissot-Dupont began creating superbly fashioned leather travel trunks for members of high society. During the 20th century, the company expanded into finely crafted lighters, humidors, and related cigar-smoking accessories, and in the process, established an unparalleled workforce of highly-skilled woodcrafters, engravers, goldsmiths, and other artisans. However, the 145th Anniversary Travel Case Humidor that S.T. Dupont has created for this year’s anniversary would have undoubtedly made even the company’s founder sit up and take notice.

Standing three-and-a-half-feet-tall and finished with eight coats of hand-polished black lacquer accented with a dramatic Atelier Sunburst tobacco-hued crocodile leather on both the front and top panels, and featuring gold trim throughout, this elegant tribute to S.T. Dupont’s beginning is more akin to a travel trunk than a humidor. The front panel unlocks and opens to reveal nine cedar trays, five of which come filled with a total of 72 Davidoff Oro Blanco cigars, the most expensive – at $500 each – and elusive of any Davidoff cigar in the line.

To cut and light these rare smokes, one of the other drawers contains a gold Le Grande S.T. Dupont Haute Création duo-flame lighter sculpted with a crocodile skin pattern in bronze and finished in yellow gold with diamond accents; it is accompanied by a matching Haute Création twin-bladed cutter. Of course, one cannot smoke an Oro Blanco cigar without the proper ashtray; thus a hand-patinated, bronze ashtray is included, along with a smaller Atelier Sunburst humidor for convenient use in a hotel room or stateroom when traveling.

Priced at $145,000 each, only 72 of the Anniversary Travel Case Humidors will be made. The quantity is an homage to the year the revered marque first traveled into the world of luxury. Orders should be placed through Davidoffgeneva.com.