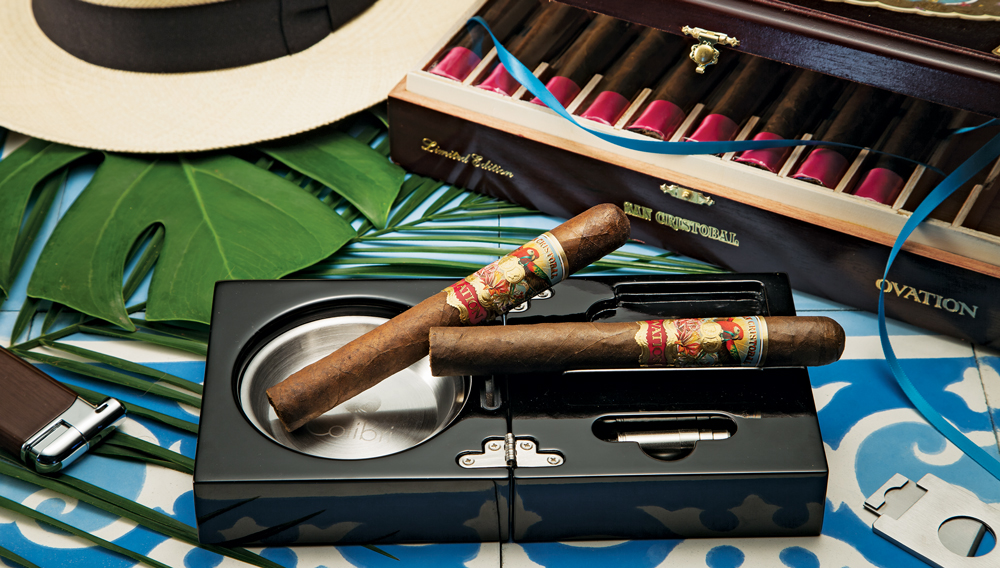 Originally published in the December issue of Robb Report as “Gift Wrappers (and Fillers and Binders): One Size Fits All”

In 2009, Ernesto Perez-Carrillo moved on from his La Gloria Cubana brand and formed EPC Cigar Company. Five years later he created La Historia—a line of full-bodied, box-pressed cigars—to honor his family. The latest addition to that line, Regalias d’Celia (a 5 7/8 × 58 torpedo), pays tribute to his wife’s grandmother and features a Mexican San Andres wrapper, an Ecuadoran Sumatra binder, and a Nicaraguan filler blend. The cigar is both strong and elegant. ($9.50) epcarrillo.com

Produced in the My Father Cigars factory, this full-bodied smoke features a San Andres oscuro wrapper that has undergone a 2.5-year fermentation. The lengthy process deepens the tobacco’s flavor and enables it to match the cigar’s double Nicaraguan binder and all-Nicaraguan filler. The cigar, which pairs well with a Hennessy Paradis, is available only as a 6½ × 52 toro and is packed 22 to a box. Only 3,000 boxes have been released. ($330 per box) ashtoncigar.com

Named after the estoque de torero—the traditional sword used by matadors—this cigar is a follow-up to last year’s Espada by Montecristo. Like its predecessor, the Estoque is a Nicaraguan puro, but it comprises a different blend that uses tobaccos from three regions of Nicaragua. The wrapper is made from Cuban-seed Viso Jalapa Vintage 2013, and two of the filler tobaccos also come from the 2013 harvest, giving the Estoque a smooth richness. The cigar is available only as a 6 × 50 torpedo. ($14.50) altadisusa.com

This latest “tattooed” version of the Henry Clay cigar is stronger than the original. Pete Johnson, owner of Tatuaje Cigars (tatuaje means “tattoo” in Spanish), collaborated on the new blend, which is composed of older vintages of the cigar’s original Connecticut broadleaf wrapper and Dominican binder. It also features a stronger filler thanks to the addition of Ometepe Criollo tobacco from Nicaragua. The combination delivers a full-bodied smoke with hints of shoe leather and pumpkin mixed with curry and molasses. The only size produced is a box-pressed 6 × 52 toro with a pigtail cap. ($9.50) altadisusa.com