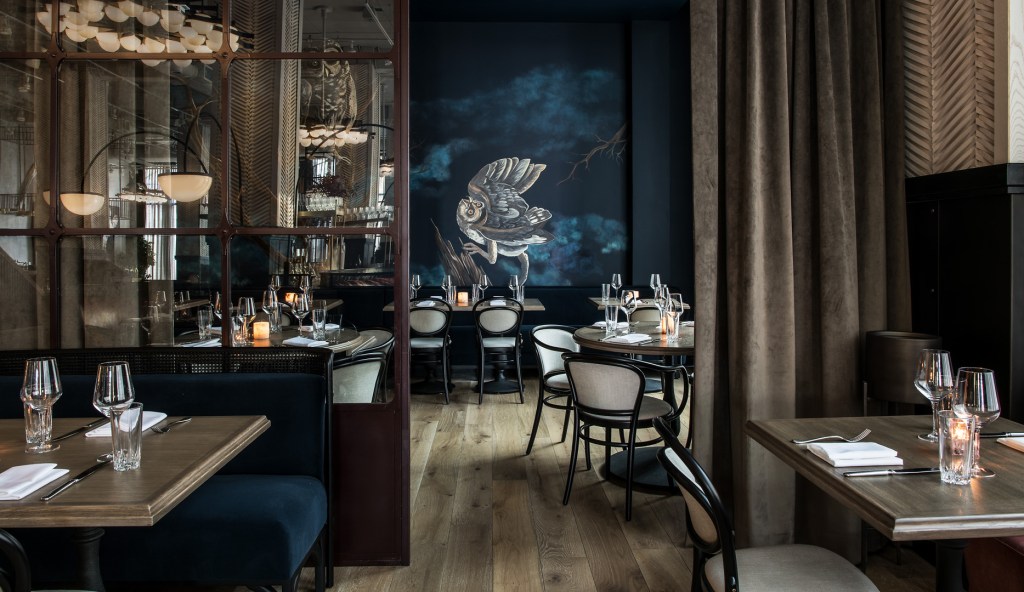 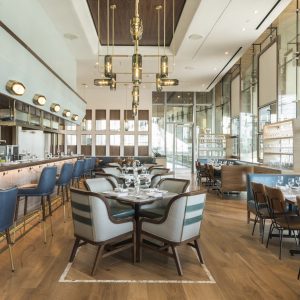 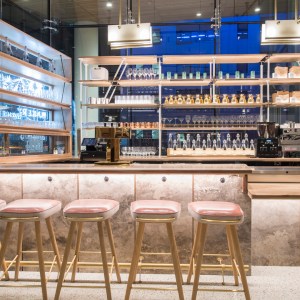 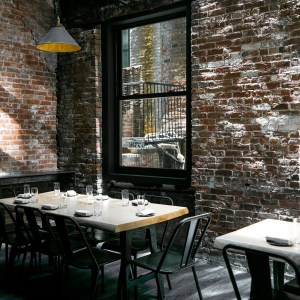 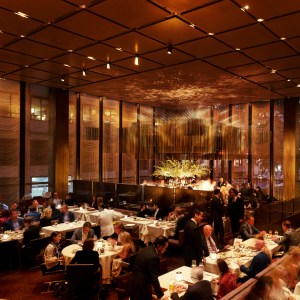 A great restaurant is so much more than just the food. The cuisine may be what gets you in the door, but the service and the design have to work in concert with the epicurean vison to create the sense of place that keeps you coming back. While we regularly cover the food side of the restaurant world, we wanted to step back and celebrate the places that also delivered exceptional design in 2017. We looked across the country to name the 10 most beautiful new restaurants of the year.

Apparatus Room, Detroit
Design: Simeone Dreary Design Group and McIntosh Poris Associates
The architects and designers behind The Detroit Foundation Hotel and its restaurant, the Apparatus Room, took the old Detroit Fire Department headquarters (first constructed in 1886) and turned it into a stunning space that honors the building’s history. They combined a Detroit grittiness with Industrial age grandeur, accenting the space with Edison bulbs hanging above the bar and subway tile encasing the columns and walls. The restaurant transports you to another time while managing to still feel fresh.

Bellemore, Chicago
Design: Studio K Creative
The designers behind one of Chicago’s best new restaurants, Bellemore, captures the essence of the Windy City. Studio K’s design is solid, cozy, and a little bit reserved, but with a touch of humor. The space is a confluence of fuchsia, brass, marble, velvet, soaring ceilings, vintage mirrors, taxidermied birds, and a mural of owls by Chicago artist Tracee Badway.

A sunny spot in a the cloudy Pacific Northwest.  Photo: courtesy Dina Avila

Capitol Bar, Portland
Design: Lightning Bar Collective
Yeah, this may be considered more bar than restaurant, but we couldn’t resist the technicolor dream of a space in Portland. Capitol Bar’s sunny design in the cloudy Pacific Northwest features a pleasing, multi-hued wall, a beautifully geometric backbar, and mid-century accents like the dining chairs and light fixtures illuminating the bar.

Felix, Los Angeles
Design: Wendy Haworth
Located on Abbot Kinney Blvd, the hip stretch of bars, restaurants, and shops in Venice, a night at Felix may see you seated alongside Simpson’s creator Matt Groening one night or Academy Award-nominee Jessica Chastain the next. But the true star of the place is chef Evan Funke and his monk-like devotion to handmade pasta.

With a cooking style inspired by Italian grandmothers, he hired designer Wendy Haworth to evoke that sensibility in the restaurant’s design. “I wanted it to feel like a grandma’s house, but the grandma being Sophia Loren,” Funke told Robb Report. “She’s had this restaurant, or this house, since the late ’40s, and she’s continually kept it hip and fresh and always refurbished it and kept up with the times. But there’s all those little layered aspects that make it feel old, but it’s really very new.” The new being the class enclosed pasta lab where you can watch sfoglias at work, and the old being the wallpapered room in back with the mismatched booths providing just the right level of kitsch you’d expect in nonna’s house.

The Grill, New York City
Design: Phillip Johnson and William T. Georgis
The level of difficulty to get this design right couldn’t have been much higher. When Major Food Group took over the space where the old Four Seasons restaurant resided inside the Seagram Building, it was tasked with updating a space designed by architectural icons: Ludwig Mies van der Rohe and Philip Johnson. There were a few hiccups with The Pool’s design (Times critic Pete Wells devoted a chunk of his review to possible landmark law violations in the renovation), however, The Grill pulls off the revitalization with swagger and charm, capturing the energy of a rollicking midcentury New York. The tired design elements, like Marie Nichols’ chain curtains have been restored to grandeur. Furniture inspired by Johnson’s designs have been refreshed with new materials. And even the service staff are looking sharp, outfitted in Tom Ford tuxedos. Combined with Mario Carbone’s interpretation of post-war dining, the design, and service create a restaurant with a fully realized vision.

Henrieta Red, Nashville
Design: Kathryn Lager Design Studio
If you had one word to describe Henrietta Red, it would be “crisp.” Everything looks perfectly in place inside contemporary American restaurant and oyster bar, from the brass and black sconces that punctuate the white painted brick walls, to the long, navy bench that bisects the long wall. The space is reserved, but not boring, with its airy, light, and soothing design that draws inspiration from coastal regions of France as well as the American West and South.

Mattie’s at Green Pasture, Austin
Design: Clayton & Little and Joel Mozersky
Developer Greg Porter and partner Jeff Trigger have taken a 19th century Victorian home and transformed it into a stunning restaurant and bar, Mattie’s. Each room takes on a unique look and feel, while still remaining cohesive to the overall design. Downstairs, a dining room features light walls, brass fixtures, and a beautiful hearth as it’s focal point. Head across to the room on the other side of the foyer and there’s a serene lounge painted in a pale green and outfitted with a white marble bar. Upstairs there’s a stately lounge with leather chairs and an impressive fireplace. The second-floor dining room that’s darker and cozier than it’s downstairs counterpart, with its deep blue wainscoting and wallpaper.

Rossoblu, Los Angeles
Design: Marwan and Mies Al Sayed, and J.P. Guiseppi
Chef Steve Samson finally opened his ode to Northern Italian cuisine inside what used to be LA’s oldest produce market, and the design was epic. The brutalist concrete shell of Rossoblu is juxtaposed with banquettes trimmed with lace, gently curving mid-century chairs, and a show-stopping mural by the artists at CYRCLE. As you dine on housemade pasta and delicious grilled meats, you can look directly into the large, open kitchen where the fire from the grill burns all night.

Tetsu
Design: Masa Takayama
The chef-owner of three-Michelin-star restaurant Masa, Masa Takayama, had been looking for a way to open a more relaxed restaurant in New York City ever since he moved there in 2004. Seven years ago, he found a space in Tribeca, built in 1865, that he thought would be perfect. With the chef’s meticulous attention to detail and the difficulties of renovating a historic space, It took nearly a decade to open his new restaurant Tetsu. The results are beautiful. The split level, lofted space features a mixture of metals, white oak, leather, and brick to create a rustic and industrial, yet relaxed space. It’s perfect for enjoying the chef’s favorite comfort food: a humble cheeseburger.

Walnut Street Café, Philadelphia
Design: Parts & Labor
The team behind the dearly departed Rebelle in New York has branched out to the City of Brotherly Love with their sunny, charming, all-day eatery Walnut Street Café. The 84-seat restaurant’s design is inspired by the Finish architect Alvar Aalto. The pastel-painted walls, angular brass fixtures, rich walnut accents, and 21-foot-high ceilings create an elegant and calming space to drink wines curated by Patrick Cappiello and Kaitlyn Caruke, and dine on fare from chef Daniel Eddy.