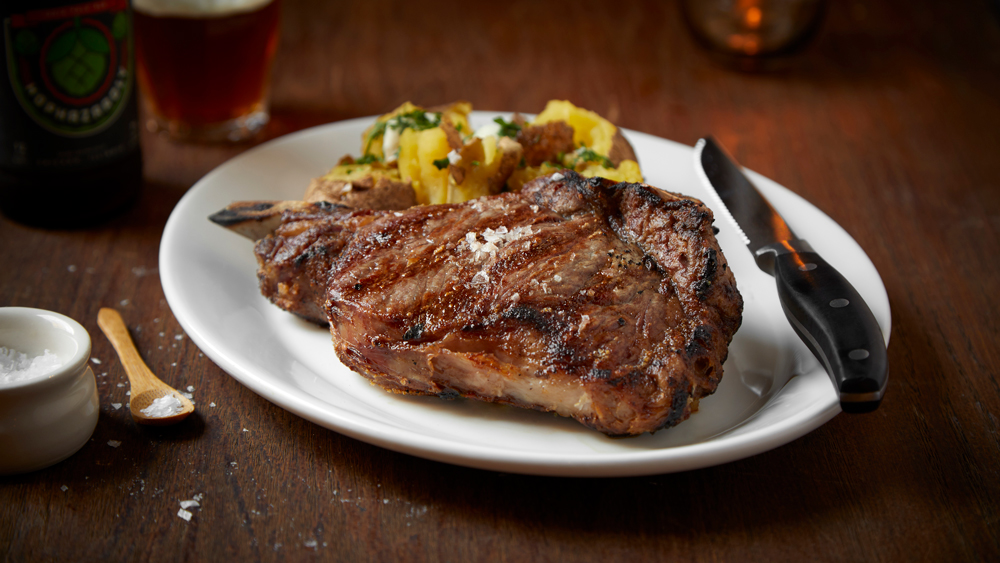 Chicago has always been a bastion of meat and potatoes. Hell, the city once had the moniker of “Hog Butcher for the World” (and yes, that includes the millions of cattle received at the Union Stock Yard back in the day). While the city has blossomed into a culinary capital with some of the country’s top chefs and restaurants pushing boundaries and experimenting with ingredients, the Windy City can’t get enough of its steakhouses. Just when you think the city has enough, another announces its opening. Many thrive, signaling people’s love of thick slabs of beef, bountiful seafood towers and overstuffed baked potatoes.

Let’s be honest: There certainly are other fantastic steakhouses in the city (we’re looking at you Chicago Cut, Prime & Provisions and Chicago Chop House), but with just 14 spots, these get our top marks, presented alphabetically. Ready to sharpen your knives and kick back with a martini or bold glass of red wine? Here’s where to do it.

The Morton name is synonymous with meat—heck, Arnie Morton practically brought the modern steakhouse to the masses with his chain Morton’s. So it’s no surprise his daughter, Amy, already a celebrated restaurateur, paid homage to her father when she opened the Barn in Evanston in 2016. The building dates back to 1883, but sat unused for 100 years. Today, this elegant old-school palace of meat, hidden down an alleyway, has continued to dazzle like its centerpiece—a shimmering light installation that hangs above the dining room. Sit below it or sneak up to the mezzanine to canoodle in red leather booths and enjoy heritage Angus cuts in red wine demi glace; indulgent crab spaghetti with white wine and shallots; or take it old school with pan-seared calves liver with bacon in a red wine reduction. Pair it all with a Martini or Old Fashioned—like you know they did back in Arnie’s day.

Walking inside is like stepping back to Belle Epoque France. A sexy low-lit room with a zinc-topped bar, red leather wrap-around booths and plush seating sets the tone for what’s to come: perfectly poured Martinis and Old Fashioneds; a selection of towers overflowing with chilled crustaceans topping out at $275; roasted bone marrow that melts in your mouth; 42-day dry-aged bone-in steaks you can top warm king crab Oscar. If a restaurant could serve as an aphrodisiac, this is it.

Following his Chicago splash with Jaleo, world renowned chef and humanitarian José Andrés teamed with Gibsons Restaurant Group to debut this carnivorous celebration overlooking the Chicago River. Entering through seafood-focused Bar Mar, guests head upstairs to a gorgeous dining room adorned with crimson chandeliers and vibrant carpets, passing by cases filled with aging meats and jamon Iberico. As this is an Andres restaurant, you can’t start a meal without indulging in some tapas, including the inventive “Philly cheesesteak airbread” made with Kobe beef and cheddar cheese. The showstopper is the “tasting through Japan” menu where you select cuts of Kobe and Wagyu to be prepared tableside on an ishiyaki stone. There are many reasons Andrés is one of the world’s most celebrated chefs—and here is one more.

Who says a steakhouse has to be grand—or even centrally located—to be one of the best? Set on busy Western Avenue in West Town, this intimate 34-seat haunt is more of a hip neighborhood brasserie that sources sustainably raised ingredients. Go early for an indulgent lunch of cheesesteaks, haus burger and, of course, oysters. Come later and start with the not-to-miss short rib beignets before diving in for the 22-oz. dry-age ribeye and even a hiramasa crudo to, you know, lighten things up. Stick around and drink at the bar—this is a neighborhood spot after all.

Step away from the bustle of the noisy L tracks just above and outside these doors and go back in time to the glamour of old Hollywood. With shimmering chandeliers, deep round leather booths and towering seafood and caviar service, you’ll feel the elegance throughout your meal. Choose from an array of cuts—or opt for the surf and turf (go ahead, get the grilled king crab leg)—and pick luxe add-ons like the market price black truffle to melt into your meat. The Windy City may be outside, but here, you may as well be sitting just off Sunset Blvd.

What started as an ode to chef-owner John Manion’s love for Argentinian grilling culture has grown into a modern take on a steakhouse with a laid-back approachable vibe. Instead of white tablecloths and stodgy servers, you get a wide-open kitchen centered on a massive 12-foot hearth with multiple grills and a wood-burning smoker, evoking an Argentinian asado. You could order a la carte and choose from a selection of choice cuts and grilled seafood, but instead go, um, whole hog, and get the $115 parrillada with all the fun meats: sweetbreads, chorizo, sirloin cap, various chimichurri and more. Then add on even more because you need those flaky empanadas and grilled lobster tail with diavola butter. Don’t miss the 100 percent South American wine list because nothing goes better with Southern Hemisphere cuisine than its wine.

Sidelined by a fire in late 2019, Gene & Georgetti—Chicago’s oldest steakhouse, opened since 1941 where it has served celebs like Frank Sinatra, Lucille Ball, Russell Crowe and Will Ferrell—will re-open in March with all the classics it has become known for over the last 80 years: rich and buttery shrimp de Jonghe, garlicky chicken Vesuvio, the proprietary Garbage Salad (iceberg, salami, mozzarella, Parmigiano cheese), signature pastas and, of course, an array of perfectly charred steaks and chops. As classic Chicago Italian steakhouses go, it doesn’t get better than this.

Celebrating its 30th anniversary in 2019, few places have the panache as Gibsons. One of the country’s most successful restaurants, Gibsons knows steaks and knows how to serve them (so much, in fact, it’s the first American steakhouse to have its own certified Angus beef program). Everything at Gibsons seems oversized: titanic crisp shrimp cocktail, gigantic double-baked potato, loaded wedge salad doused with blue cheese, 22-oz. W.R.’s Chicago Cut or the super colossal Australian lobster tail. Oh, and when you order a “slice” of carrot cake or chocolate mousse pie, ask for six forks because you will need to share it.

Chef Giuseppe Tentori earned his Michelin stars at Boka (after working alongside legendary chef Charlie Trotter), but solidified his reputation first with GT Fish & Oyster and its follow up: the gorgeous and upscale GT Prime designed by Studio K’s Karen Herold, who outfitted the wood-paneled room with plush fabrics, rounded leather booths and a glistening custom chandelier. The food is even sexier: tagliatelle topped with black Umbrian truffles; iridescent hiramasa crudo with chilled red chili vinaigrette; beautifully marbled beef. Can’t decide on a cut? Get the Carnivore: four 8-oz. cuts of the Chef’s Select—filet, Prime NY strip, bison and Westholme Wagyu. This is the way food was meant to be shared.

Set between Pilsen and Chinatown sits 88 Marketplace, a massive bi-level food court. And within that, you find Holu, one of the newest and more inventive steakhouses to debut in Chicago. Think of it as a melding of Asian barbecue and a traditional steakhouse, but here you can select, by the ounce, from USDA Prime, Australian or American Wagyu and Japanese Kobe. But also choose from seasonal specials like fresh, live wild eel, Australian cold water jumbo lobster or wild jumbo tiger prawn—all of which you grill yourself at the table. If there was ever an adventure in steakhouse dining, this is it.

An offshoot of one of the country’s top-grossing restaurants (that’s Miami’s Joe Stone Crab), this Lettuce Entertain You-owned outlet is one of the city’s most beloved steakhouses. Classic as classic goes, the suited waitstaff preside over an always buzzing white tableclothed room where they have cracked upwards of 1.5 million pounds of sustainably caught chilled stone crab flown in fresh from Florida and served with Joe’s mustard sauce. Tender bone-in signature steaks get carved by master butchers and servers delight with table side preparations of Dover sole and jumbo red king crab. This is truly one classy joint.

If you’re not having a party at Maple & Ash, you’re not doing Maple & Ash properly. One of the liveliest and most successful restaurants in the country, this splashy spot encourages a great night out, even on a Tuesday. Here, chef Danny Grant cooks almost everything—steaks, lamb, salmon, branzino—over open fire. Don’t want to make any decisions? Get the $200-per-person “I Don’t Give a F*@k” tasting menu. However you order, make sure you get the hearth-fire-roasted seafood tower where oysters, scallops, lobster, clams and more get finished in garlic butter and chili oil. Pro tip: Tell your server you want the pasta add-on for the tower and be prepared to have your mind blown. Trust us.

When celebrities open restaurants, you’re right to be wary. But when Bill and Giuliana Rancic teamed up with the Melmans (the family behind Lettuce Entertain You Enterprises), they struck gold. RPM Steak followed the skyrocketing success of RPM Italian and it hasn’t slowed since opening in 2014. It combines the class of an old school steakhouse with the flair of a modern restaurant. It’s a gorgeous, glimmering room and no matter what you order—appetizer of coal-roasted Alaskan king crab with soy lime glaze; dry-aged cheddar steakburger with horseradish on brioche; or some of the most exclusive Japanese beef in the world like the Hokkaido snow beef or 100 percent Tajima Kobe from Hyogo Prefecture—you just may become a regular.

Magic happens almost nightly at this posh Avroko-designed Fulton Market steakhouse that pays homage to the meatpacking titans that ruled over Chicago. That magic includes impeccable service where a concierge will arrange whatever you desire. That also means an astounding wine list and expert cocktails, whether made at the bar or the cart rolling through the dining room. Of course, this reflects chef Chris Pandel’s range of Prime steaks alongside other options like dry-aged Wagyu burger with truffled goat cheese; foraged mushroom risotto and prized beef Wellington perfectly cooked inside a flaky puff pastry—and pastry chef Leigh Omilinsky’s gorgeous desserts. But real wonder in the form of a roving magician who rolls up to your table? Now that’s magical. Hitting a Cubs game?  Don’t miss Swift & Sons Tavern across from Wrigley Field.