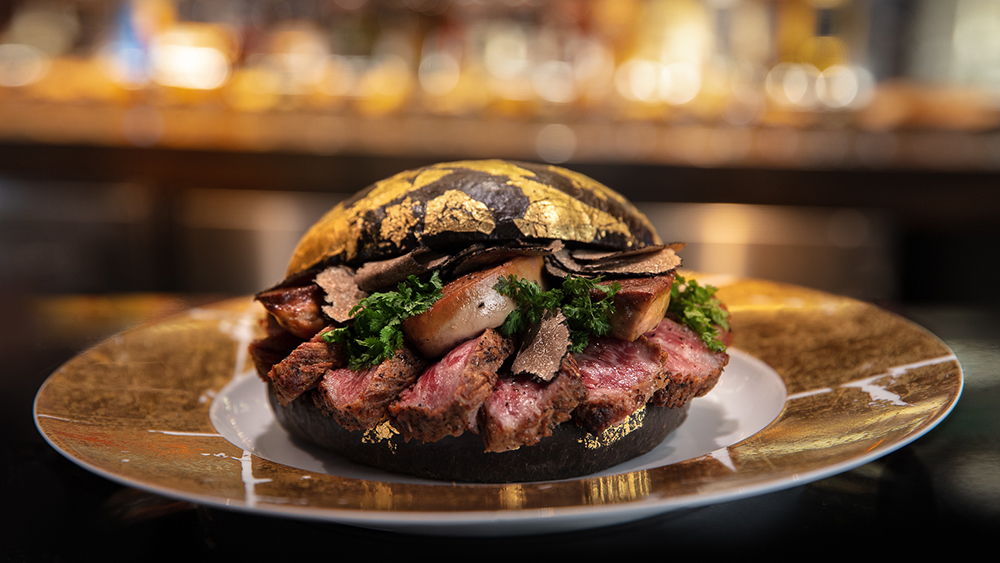 Earlier this year, we bit into one of the world’s most expensive burgers: a $900 foie gras specialty served up in Japan. We thought that was extra, but a new variant on the sandwich doubles down—on price, not patty. Say hello to the “Black Gold,” a $1,600 burger that’s just hit the menu at Houston’s H Bar.

The Black Gold sticks to the fail-safe formula we’ve seen flashy burgers dutifully follow over the past year—sliced wagyu beef + black truffle shavings + seared foie gras = winner—but it goes for an extra step with a topping of 24-karat gold leaf. This metallic touch was inspired by the Gold Rush, while the black brioche bun is a tribute to the state’s rich (pun intended) oil history.

The burger features an entire pound of A5 wagyu beef flown in especially from Japan—everything really is bigger in Texas—which is plonked upon a caviar-infused bun because, well, they had to get another luxury ingredient in there somewhere. But the over-the-top extravagance doesn’t stop there: the blingy burger is paired with matching golden french fries and a bottle of 2006 Dom Perignon Champagne. You wouldn’t have a Coke with this thing, would you?

The new menu item is in lockstep with the other offerings at the Post Oak Hotel, in which the H Bar resides. The property in Uptown Houston has a $3 million wine library, a Rolls Royce dealership in the lobby and a five-star spa to boot.

It is worth putting that high price tag into perspective: For the same amount, you could buy you around 666 In-N-Out cheeseburgers that cost $2.40 apiece, or roughly 106 half-pound Luger Burgers from the famous Peter Luger Steakhouse, which go for $15 each. It’s also worth noting that the $1,600 which the Black Gold demands is still a lot cheaper than the world’s most expensive burger. The Fleur Burger, available at Hubert Keller’s Fleur de Lys restaurant in Las Vegas—is currently priced at $5,000. That sandwich doesn’t feature any edible gold, but it does come with a bottle of Chateau Petrus old enough to buy itself a drink.