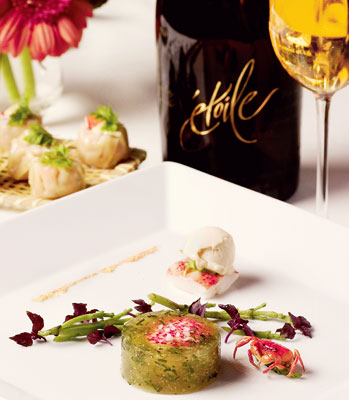 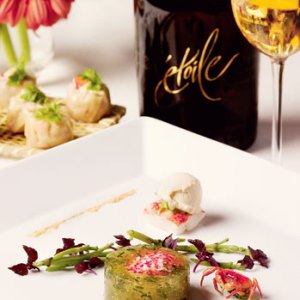 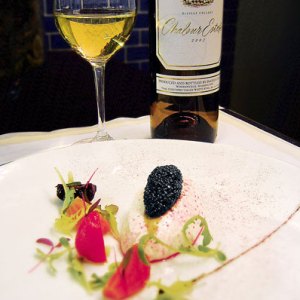 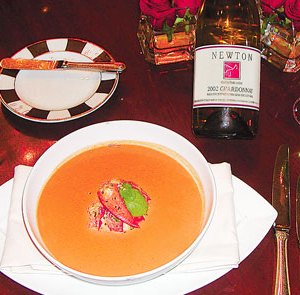 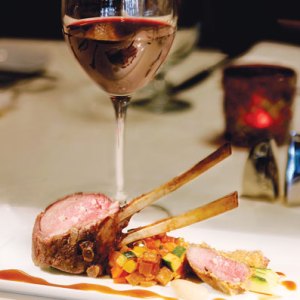 Ron Boyd, former executive chef of the Restaurant at Domaine Chandon, pairs his amuse bouche, chilled lobster with tarragon and shiso, with the Yountville, Calif., winery’s own étoile Rosé, a sparkling red blend of Chardonnay, Pinot Noir, and Pinot Meunier that has been aged for five years. “The flavors and texture in the lobster and the étoile Rosé unfold in a similar fashion,” says Boyd, who departed the restaurant in August. “The wine starts off with a clean, fresh mineral sensation that stimulates the palate, followed by a creamy melt-in-your-mouth texture that reveals itself as the wine finishes with raspberry fruitiness. Likewise, the gentle poaching of the lobster creates an amazing texture that melts in your mouth—warm and buttery, and finishing with a slight but lasting sweetness.”

Chef Shea Gallante and sommelier Robert Bohr of New York’s Cru pair a burrata—a dish composed of fresh mozzarella stuffed with a blend of heavy cream and mozzarella curds, wrapped in cane leaves and resembling a purse—with a white Bordeaux blend from DeLille Cellars, a 13-year-old winery in Woodinville, Wash., located roughly 20 miles northeast of Seattle. DeLille’s 2003 Chaleur Estate Blanc consists of 58 percent Sauvignon Blanc and 42 percent Semillon. “I chose this wine because the creaminess of the burrata needs a rich style of white, and the apricot salad mirrors the fruit flavor profile in the wine,” says Bohr. “The caviar adds a salty component that brings all of the flavors together.”

When making the stock for his lobster bisque, David Daniels, executive chef at the Federalist restaurant at XV Beacon hotel in Boston, uses whole lobsters and adds to the concoction fresh herbs grown in the hotel’s roof garden, along with a touch of sherry. Bruno Marini, the restaurant’s general manager and wine director, matches it with the 2003 Darioush Signature Chardonnay. Darioush Khaledi, who spent his childhood in the Shiraz winemaking region of Iran before emigrating to Southern California in the 1970s, spent seven years establishing his Napa, Calif., winery before opening it in August 2004. “This is an extremely small winery that produces a complex yet elegant Chardonnay that perfectly complements the bisque,” Marini says. “I love the wine’s well-structured crispness, but it is also lightly acidic, which balances the creamy, flavorful soup.”

Chef Melissa Perello made her mark at the now-shuttered Charles Nob Hill in San Francisco before moving up to the nearby Fifth Floor Restaurant, where she continues to gain notice; Perello was nominated for the 2005 Gallo of Sonoma Rising Star Chef of the Year award from the James Beard Foundation. Her salad of fiddlehead ferns, morel mushrooms, and Winchester aged Gouda cheese also contains a tablespoon of 100-year-old balsamic vinegar, giving the restaurant’s aptly named sommelier, Emily Wines, much to play with. She selects a 2003 Chenin Blanc from Chappellet, a family-owned winery in St. Helena, Calif., that opened in 1967. Chappellet adds depth to the vintage by fermenting and aging 25 percent of the wine in French oak barrels; the rest matures in stainless steel tanks. “The crisp apple fruit and earthy tones in the wine play off the morel mushrooms perfectly,” says Wines, “and I find that the natural acidity in Chenin Blanc also complements the ferns.”

Kevin Vogt is a busy man. The sommelier at Emeril Lagasse’s Delmonico Steakhouse in Las Vegas estimates that the restaurant’s patrons ordered 48,000 bottles of wine last year, which is enough to fill five semitrailers. Vogt says that the key to finding a match for chef de cuisine Dana D’Anzi’s steak dish—a charbroiled, dry-aged beef sirloin with bacon cheddar twice-baked potato, Creole tomato glaze, and horseradish cream—lies in the glaze. “With any pairing, you pair the dominant flavors in the course, and our dominant flavors are in the sauce,” he says. “The sirloin itself is pretty flavorful and needs a nice, big, full-flavored wine to go with it, but the tomato glaze is spicy and sweet at the same time. The sweetness mutes the intensity of the fruit of any wine. I need a more powerful, flavorful wine [so that] when the tomato glaze mutes the fruit flavors, the wine still has body.” Vogt selects a 2002 Alban Syrah Reva from Alban Vineyards, a 16-year-old winery in Arroyo Grande, Calif. “It has a lot of sweet black and red fruit,” he says. “It’s very viscous and mouth-filling.”

“I think what people look for, and what I look for, are wines that show well,” adds Vogt. “I don’t want the wine to get lost behind the food, and it’s not like Emeril’s food is on the subtle side.”

The co-owners of Equinox, a six-year-old restaurant in Washington, D.C., understand the value of a harmonious pairing: Todd and Ellen Gray are husband and wife. Executive chef Todd, a Culinary Institute of America graduate, worked locally in the kitchen of Jean-Louis Palladin at the Watergate hotel and also in that of Roberto Donna at Galileo prior to opening Equinox. Ellen, who met Todd while working as a salesperson for a food distributor and was later employed by the gourmet goods purveyor D’Artagnan, handles general managing duties and related tasks. The combination has worked well, garnering the restaurant local and national accolades that include five consecutive nominations for Todd as the James Beard Foundation’s best mid-Atlantic chef.

Todd pairs an entrée of herb-roasted rack of lamb with fingerling potatoes, mustard greens, and minted lamb jus with a 1999 Peter Michael Les Pavots Estate red Bordeaux blend that contains Cabernet Sauvignon, Cabernet Franc, and Merlot. Les Pavots means “the poppies” in French and refers to the poppies that grow wild on Mount St. Helena, the Sonoma County site where the 23-year-old winery is located.

“This pairing works because the lamb is rich and robust in flavor,” Todd says. “Earthy potatoes and slightly bitter greens are rounded out by the mint in the lamb. Its bold flavors are equaled by the elegant, velvety characteristics of the Cabernet, which contains profound notes of dark stone fruits and accents of leather. Additionally, mint makes a classic pairing with Cabernet, as [there are] hints of mint in the Cabernet from its aging process.”

A TASTE OF CHILDHOOD

Max McCalman has a cheesy job and loves it. As the maître fromager for the Artisanal restaurant group, he selects the cheese offerings at restaurants Picholine and Artisanal in New York, and he serves as dean of curriculum at the Artisanal Cheese Center, a two-year-old Manhattan facility that he describes as “a cathedral for cheese.” McCalman was a sommelier before he was a fromager—in fact, a 1984 cheese and wine pairing event that he attended sparked his interest in cheese—eminently qualifying him to design a cheese-course pairing. He selects a 2002 Frenchtown Vineyard Syrah from Dunham Cellars, a 10-year-old winery in Walla Walla, Wash., to accompany three cheeses: Hoja Santa, a goat’s milk cheese from Dallas’ Mozzarella Co. that takes its name from the sassafras leaf in which it is wrapped; Vermont Shepherd, a firm-textured sheep’s milk cheese produced on a farm of the same name near Putney, Vt.; and Red Hawk, an organic cow’s milk cheese from Cowgirl Creamery in Point Reyes Station, Calif.

All three pairings remind McCalman of flavors from childhood. The Hoja Santa with the Syrah “is an unusual, unexpected match,” he says. “The sassafras in the cheese and the creaminess of the goat’s milk make [the combination taste] like a root beer float.” The Vermont Shepherd match recalls the flavor of peanut butter and jelly, “because it has a nutty taste. Lots of sheep’s milk cheeses have that quality,” notes McCalman. The Red Hawk pairing “starts out meaty and ends in lingering berry flavors,” he says. “Of the three, this is probably the tangiest cheese, and it’s also pasteurized, so it’s not going to put up a fight in any way. It’s not going to challenge the wine. The milk comes through. Think of it more like berries and whipped cream.”

Bradford Thompson, chef de cuisine at Mary Elaine’s at the Phoenician resort in Scottsdale, Ariz., spent five years with Daniel Boulud at his namesake Manhattan restaurant before coming to Mary Elaine’s in 2002. His dishes find matches among the more than 45,000 bottles in the restaurant’s wine cellar. Greg Tresner, the first Arizona sommelier to pass the grueling Master Sommelier exam, heads the resort’s wine program. For Thompson’s lavender and honey parfait with almond milk and toasted almonds, he selects a 2001 Dolce, a golden-colored, late-harvest blend of 90 percent Semillon and 10 percent Sauvignon Blanc that was aged in new French oak barrels for 29 months. Dolce is owned by Far Niente Winery, which considers the Oakville, Calif., operation a separate sister property. “[The Dolce] offers very sweet peach and apricot flavors and a honeyed texture,” says Tresner, “which is countered by a touch of savoriness from the slightly bitter lavender and toasty almonds.”