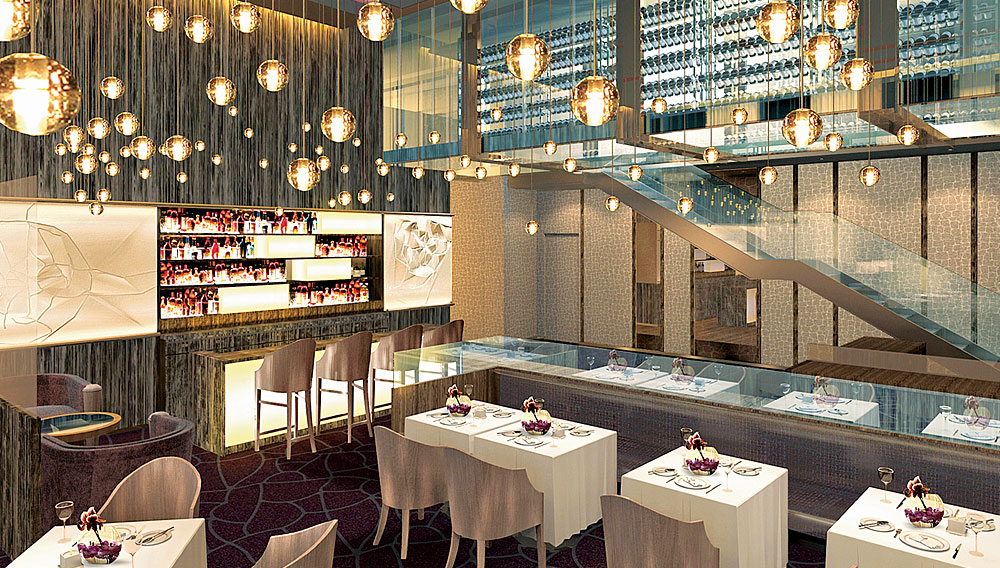 A top French chef will open a restaurant in the Bright Light City while a young American chef expands his presence in the City of Light.

Parisian Pierre Gagnaire will extend his empire into the United States this winter just as American Daniel Rose begins building his in Paris.

Gagnaire, who holds three Michelin stars and runs six restaurants (two in Paris and one each in Tokyo, Hong Kong, London, and Seoul, South Korea), will bring his trademark precision, complex layering of intense flavors, and rigorous adherence to technique to the new Mandarin Oriental, Las Vegas, which is set to open in December. The name of the restaurant has not yet been announced, but the menu will showcase modern French cuisine that reflects the ingenuity of such Gagnaire mainstays as frog-leg soup garnished with mullet-roe caviar, algae, and Dutch gin.

Designed by Adam D. Tihany, the restaurant’s interior will feature a color scheme of deep plum and eggshell white, with spherical lights that dangle from the ceiling. The decor will also include a glass-encased wine loft in the 60-seat main dining room. (A private salon will fit as many as 12 more diners.)

Meanwhile, back on Gagnaire’s home turf, the American upstart Daniel Rose will reopen his Spring restaurant early next year in a larger space in Paris’ raffiné First Arrondissement. The 31-year-old chef, whose original 16-seat Spring in the Montmartre section of Paris has been a sensation since it debuted three years ago, claims little formal culinary education. He was born and raised in Chicago and has worked in kitchens in Guatemala and Japan. He originally planned to open a hotel in Paris—after thoughts of joining the U.S. Navy and then the French Foreign Legion—but when that scheme proved too ambitious, he settled on a tiny restaurant.

Currently, Spring has no menu and offers different dishes every night. Rose’s cravings often determine what he serves; recently, his hankering for sticky, sweet food prompted him to whip up a beignet sole. The chef beer-battered the fish, fried it whole, and served it with an à la minute grapefruit confiture.

The upcoming Spring will be housed in a three-story structure that recently was a skate shop and centuries ago was a restaurant. It will have an open kitchen and a wine bar, and although the dining room will be twice the size of the original Spring’s, it will seat just 20.

Rose also plans to take over a property across the street and convert it into an upscale wine-and-grocery shop. And he might come close to fulfilling his earlier ambition of being a hotelier: Rose is developing apartments nearby that can be rented for stretches of time. Room service from Spring will be one of the amenities.