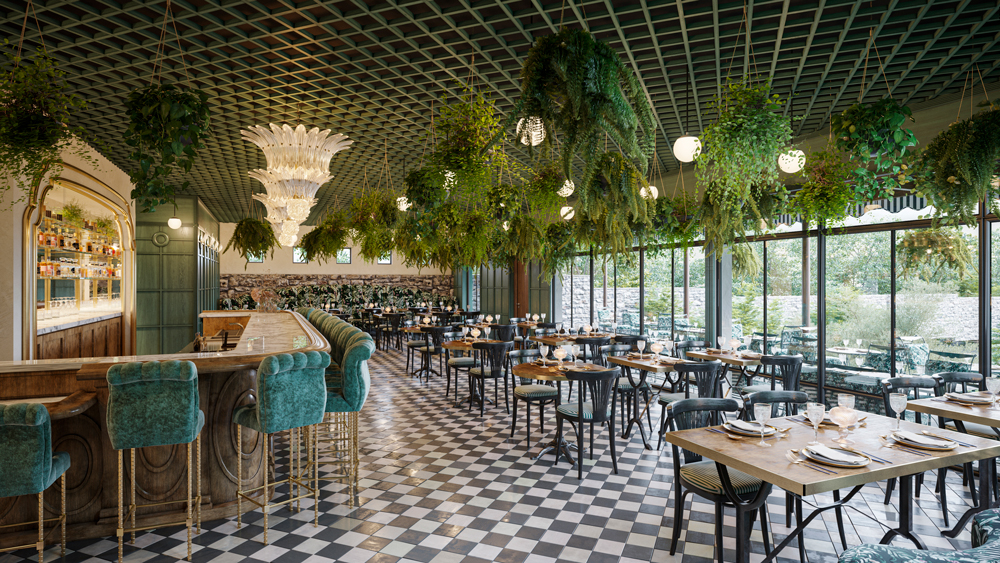 We’ve just finished off a decade that saw huge transformations in what we ate and how we ate it. As we kick off the 2020s, we see a rich and varied collection of restaurants readying to open across America. The dawning of the decade will see Michelin three-star chefs expand their empires, the duo behind James Beard Award-winning Frenchette take over an 82-year-old restaurant, a popular Chicago chef see if she can make it work in the City of Angels, some husband-wife teams will return to their hometown and more. Here are the restaurants we’re most excited to see open this year.

The team behind Goodnight Charlie’s, Montrose Cheese & Wine and Rosie Cannonball in Houston will flex their fine dining muscle with March. Chef Felipe Riccio will serve a Mediterranean-inspired menu in the 26-seat restaurant, while Goodnight Hospitality’s master sommeliers David Keck and June Rodil will bring their extensive knowledge to the beverage program along with advanced sommelier Mark Sayre.

Chef Curtis Duffy and his front-of-the-house compatriot Michael Muser are back. After a break-up in 2017 with Grace, the restaurant they built and led to three Michelin stars, they’re planning an even more ambitious project. The duo promises an immersive dining experience where even the architecture plays a role in the meal.

In 2019, the Proper Hotel opened in Santa Monica, Calif. with Gabriela Camara and Jessica Koslow creating the much anticipated Onda. This year will bring another Proper Hotel to LA, this time it will be downtown, with James Beard Award winners Suzanne Goin and Caroline Styne creating an all-day restaurant that’s vegetable-driven and influenced by Spanish and Portuguese cuisines.

Though they’re known for their Southern-influenced Italian food with restaurants Hog & Hominy in Memphis and Josephine Estelle at the Ace Hotel in New Orleans, chefs Andy Ticer and Michael Hudman are going Gallic for their next Memphis restaurant. Their French brasserie inside a former train station will serve classics like coq a vin, escargots and beef tartare.

A rendering of the restaurant inside the Commodore Perry Estate.  Photo: courtesy Lutie's Garden Restaurant

Drawing from the gardens of the landmark Commodore Perry Estate and local purveyors, husband-and-wife culinary team Bradley Nicholson and Susana Querejazu will open a luxe seasonal restaurant. The two Texas natives have worked in some of the world’s best kitchens honing their skills before their homecoming. Nicholson, who has cooked at Benu, Birdsong and Matt Orlando’s Amass, will handle the savory side, while Querejazu, an alum of Quince, Saison and Le Meurice, will lead the pastry kitchen.

On his Instagram Corey Lee of Michelin three-star Benu announced he would open a Korean restaurant in San Francisco. The Kitchen will be led by JeongIn Hwang, who is currently the executive sous chef at Benu.

The duo responsible for 2019’s James Beard Award winner for Best New Restaurant, Frenchette, are taking over a storied French bistro that opened on the Upper East Side in 1937. Riad Nasr and Lee Hanson are renovating the interior, but plan keeping some of the classics on the menu like frog’s legs and snails.

Inside the city’s tallest building, Dominique Crenn will open a restaurant, boulangerie, café and wine bar at the SalesForce Tower. It will be the latest venture for the Michelin three-star chef who also operates Atelier Crenn, Petit Cren and Bar Crenn in San Francisco. One thing you won’t find there is meat, as Crenn announced in 2019 that she was making all of her outposts pescatarian because of her desire to operate a more environmentally sustainable restaurant group.

Brothers Curtis and Luke Stone are in expansion mode. After opening Georgie in Dallas last year, they’re readying yet another project, this time in the old Trust Building in downtown LA. The menu for the restaurant has yet to be set, but they promise it will differ from their meat-centric Gwen in Hollywood and tasting menu-driven Maude in Beverly Hills.

A rendering of the 28-seat restaurant.  Photo: courtesy Hiyakawa

Combining like some sort of Chicago culinary Voltron, two of the city’s preeminent restaurant companies—Alinea Group and Lettuce Entertain You Enterprises—are joining forces to reopen a French restaurant that closed back in 2007. Ambria operated for 27 years in the Belden-Stratford Building, and this new incarnation promises modernized versions of French classics.

Sang Yoon’s takeover of this little corner of Los Angeles continues apace. Following on the heels of his fine dining restaurant Lukshon and the second location of his hit burger and beer bar Father’s Office, he’s expanding further in the Helms Bakery District. He’s taking over the old Helms Bakery itself and creating a full-service restaurant serving elevated takes on breakfast and lunch, as well as a specialty goods store.

Sri Gopinathan of Michelin two-star Campton Place will take a slightly more casual approach to the California-Indian cuisine that has been his calling card. The menu will draw from Kerala, the southwest coastal province from which Gopinathan hails, but will also have influences from across India. Expect dishes like winter mushroom korma with pickle and jalapeño, and chicken-fried kabocha squash.

The husband-wife duo of Shaina and Joe Papach met while both cooking at Gramercy Tavern in New York City. Eventually they headed west and worked in a few more legendary kitchens—Shaina at Chez Panisse and Joe at Cotogna, Quince and The French Laundry. Now they’re setting up shop in Shaina’s hometown to open their take on a Midwest supper club that will include refined versions of chicken cordon bleu and clams casino.

After winning Top Chef in 2018, it was clear Joe Flamm’s time at Michelin-starred Spiaggia would draw to a close soon after. He told us that his next step would be opening his own restaurant. This year that will finally come to fruition, as he’ll debut a Croatian-Italian place in the West Loop, intermingling the cuisine of two countries separated by the Adriatic Sea.

Chef Patrick O’Connell, the legend behind Michelin three-star Inn at Little Washington is creating a café and bakery right across the street, inspired by his love of France’s sidewalk cafes. The bakery will have coffee and pastries for breakfast, while the café will serve lunch and dinner, with a menu featuring favorite dishes from the early days of the Inn.

After some delays, Stephanie Izard will bring her hit Chicago restaurant to downtown Los Angeles. It’s the first time that James Beard award-winning restaurateurs Kevin Boehm and Rob Katz will open outside of the Windy City. The restaurant will serve some dishes from the original location, but Izard’s family-style menu with global influences will also reflect her newfound access to the bounty that is Southern California produce.

Acclaimed San Francisco chef Mourad Lahlou is teaming up with Chris Kajioka to create a restaurant inspired by French and Japanese cuisines. And the cocktail program there will get a burst of creativity from Justin Park and Tom Park, who run the outstanding Bar Leather Apron.

The final edition of Chris Shepherd’s ambitious (some would say crazy) project to open and close five new restaurants in the same space in five years will open in the fall. The theme has not been announced yet, but the previous four were Steak, Romance Languages (the food of Italy, Spain and France), Mediterranean and Gulf Coast.

Simone Tong made her mark on New York’s restaurant scene serving mixian, a spaghetti-shaped rice noodle, at Little Tong Noodle Shop. Now she’s readying a 25-seat restaurant in the West Village where she’ll explore the evolution of Chinese-American food through her dishes.

Enrique Olvera and Daniela Soto-Innes take the partnership that created the New York hits Cosme and Atla to the City of Angels. But this won’t be some carbon copy of those two restaurants; they’re developing a place that they call Californian Mexican cuisine, drawing inspiration from Los Angeles and its ingredients.