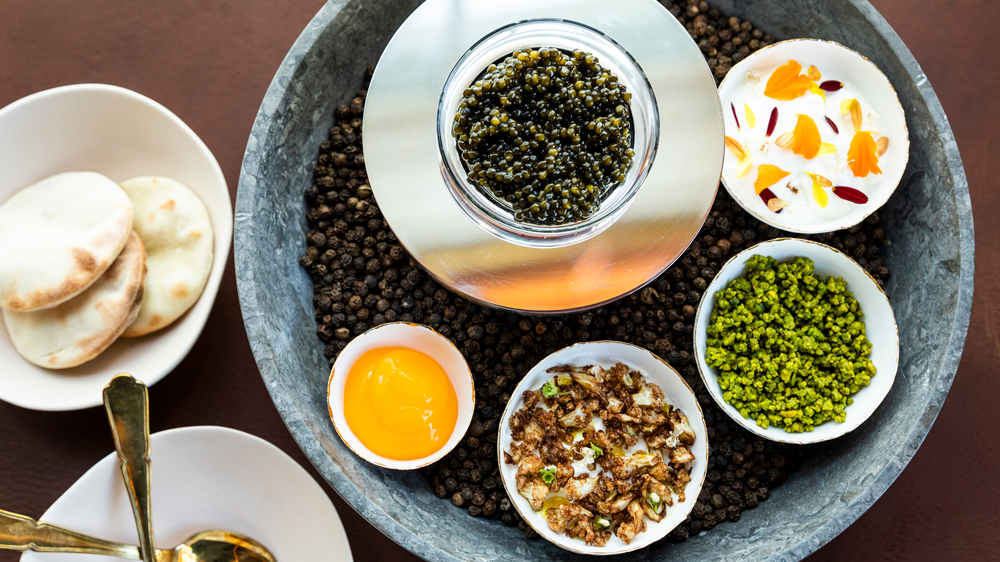 The industry ground to a halt in 2020, with many forthcoming restaurants’ plans scrapped entirely or put on the back burner. Places like a fine dining spot in Houston and a Top Chef winner’s first solo project were scheduled to open last year, but were hit with delays. However, in 2021 green shoots are beginning to emerge. That’s because as the pandemic wore on, restaurateurs and chefs kept working behind the scenes to make their new places a reality. We’ve checked in with them on their plans for the upcoming year to survey the restaurants we’re most excited to see come to fruition and travel to once Covid-19 hopefully subsides and some semblance of normality returns. Here are our most anticipated restaurants of the year to come.

Katianna and John Hong have relocated to LA from the Bay Area to create a new restaurant that’s a little more casual than their fine dining background. Both worked at Michelin three-star Meadowood, with Katianna leading the kitchen as chef de cuisine, before becoming the chef at The Charter Oak. Yangban Society in Downtown LA takes the place of Bon Temps—which shuttered under the financial strain of the pandemic—and will feature Korean fare that’s also influenced by the Jewish delis Katianna remembers from her youth.

Our 2019 Chef of the Year is always keeping busy, and 2021 is no exception. Chris Shepherd has two new projects in the works slated to open the first half of 2021. The first, Georgia James Tavern, is a casual cousin to his hit steakhouse, Georgia James, that will serve salads, sandwiches and cast-iron cooked steaks. The second project will see Nick Fine, the culinary director of Shepherd’s hospitality group, lead a full-service restaurant devoted to Texas cuisine. Inside the Houston Farmers Market, Wild Oats will serve dishes like Fine’s take on shrimp and grits using masa.

Back in February, Top Chef winner Joe Flamm and I stood in the empty Fulton Market space where he planned to build his restaurant that channels his Italian roots as well as his wife’s Croatian heritage. The pandemic derailed progress, but Rose Mary is still a go, with handmade pastas Flamm honed while working at Michelin-starred Spiaggia and inspired by dishes he tried while traveling Croatia with his wife.

Claudette Zepeda won raves at her San Diego restaurant El Jardin, serving her take on regional dishes from around Mexico. At Alila Marea—a seaside resort scheduled to open this year—she’ll debut Vaga. It’s an ode to her hometown of San Diego, with dishes inspired by food she’d eat growing up in the city, like dosas, soup dumplings and pancit noodles.

In 2019 Tom Cunanan won the James Beard Award for Best Chef: Mid Atlantic with the Filipino fare he served at the 24-seat DC restaurant Bad Saint. Last fall, he parted ways with the restaurant and now he’s teaming with chef Paolo Dungca on Pogiboy, where they’ll serve up classic smashburgers, beef sandwiches with burnt onion horseradish and longanisa patty burgers.

One of the most acclaimed restaurants to open in LA in the last few years, Bon Temps, became an early casualty of the pandemic, closing last May. Lincoln Carson hasn’t stayed down for long. He nabbed a Beard nomination for Best Pastry Chef and he opened Merite Bake Shop in Idaho. Now, he’s partnered with award-winning winemaker/somm/restaurateur Rajat Parr and acclaimed chefs Anthony Carron and Steven Fretz for a steakhouse and seafood restaurant in Santa Barbara wine country. Coast Range will open in stages with Vaquero Bar arriving first in January and the café and restaurant to follow.

The Dining Room at High Hampton and The Tavern, Cashiers, NC

The scenic retreat nestled in the North Carolina mountains is undergoing a big renovation and when it reopens, High Hampton will feature two new restaurants from the team behind Blackberry Farm. Scott Franqueza, Zach Chancey and April Franqueza will lead the resort’s culinary rebirth, with Scott focusing on dinner, Chancey handling breakfast and April leading the pastry department.

The Harlem restaurant run by JJ Johnson focuses on different cultivars of rice from around the world, drawing inspiration from them for his dishes like his shrimp, sticky rice, coconut and green curry bowl. During the pandemic he’s paid it forward, serving more than 100,000 meals to frontline health workers and people in need. Now, he’s also focusing on expansion. He’s already opened a new outpost in Long Island City and early this year he’ll debut a Field Trip in Rockefeller Center.

Legendary chef Sean Brock left Husk and McCrady’s and relocated to Nashville to open pursue a new project. At Husk, Brock created one of the most influential restaurants of the last 30 years, becoming a leading chef and scholar of Southern cooking. With Audrey, he’ll turn his eye more toward Appalachian cuisine.

Such is Sugarfish co-founder Jerry Greenberg’s passion for grass-fed Wagyu beef, that he built a whole steak club around First Light, a New Zealand ranch that raised the best he’d tasted. Now, he’s creating a whole steakhouse around that same beef. Originally slated for 2020, Matū will now open in Spring or Summer of 2021 with an emphasis on serving sustainably raised beef.

The Michelin-starred chef behind Masseria and Officina, Nicholas Stefanelli, will draw on his Greek heritage when he opens Philotimo. The pandemic caused construction delays, pushing the restaurant past its original August opening date. But by the time it does arrive, the chef known for Italian fare wants to show Americans a side of Greek cuisine beyond feta, with dishes from different regions around the country.

For nearly 70 years, Old John’s Luncheonette was a beloved diner on New York’s Upper West Side—so much so that even legendary chef Ferran Adrià made a pilgrimage there in 2011. Covid-19 claimed the place last fall, but now restaurateur Louis Skibar will revive the spot where he once worked way back in 1984 when he was 16. He’s giving the old place a facelift and bringing in chef Grayson Schmitz to lead the kitchen and Tanya Ngangan to be Old John’s first-ever pastry chef.

The American Steakhouse meets Korean Barbecue notched a Michelin star and Best New Restaurant rating from us for its New York City location is heading south. Restaurateur Simon Kim and chef David Shim are bringing their excellent dry aged beef and delicious banchan to Miami’s Design District. If you can’t wait for it to open or get to South Florida anytime soon, you can always order a steak dinner from them shipped right to your door via Goldbelly.

One of the youngest American chefs to notch two Michelin stars when he earned them at RIA in Chicago back in 2011, Danny Grant now leads multiple restaurants for the What If…Syndicate, including the steakhouse Maple & Ash and Etta in Chicago. This year he’s branching out of the Windy City with new locations of Etta in Scottsdale and Los Angeles that will serve fare like seasonal pizzas and wood-fire baked focaccia. In Dallas, he’ll open a duo of restaurants inside the 49th and 50th floors of newly renovated downtown building The National. On 49, Monarch will be a wood-fired modern Italian restaurant featuring 50-oz. porterhouses cooked on the coals and black truffle pasta. While up on 50, he’s creating a small, luxe sushi lounge called Kessaku.

Justin Bazdarich of Speedy Romeo and Oxomoco fame is opening a sequel to his Michelin-starred Mexican restaurant. Led by chef de cuisine Alan Delgado, an El Paso native who worked at acclaimed modern Mexican restaurant Comedor in Austin, Xilonen will serve only vegan and vegetarian fare. The restaurant is inspired Bazdarich’s desire to create a more environmentally sustainable restaurant. Xilonen began offering breakfast and lunch in late December, but the full opening should happen in the next few months when dinner service begins.

This restaurant was slated to be one of our most anticipated openings of 2020 until the pandemic intervened. The team behind Goodnight Charlie’s, Montrose Cheese & Wine and Rosie Cannonball in Houston wanted to flex their fine dining muscle with March, led by Goodnight Hospitality partners chef Felipe Riccio and master somm June Rodil along with beverage director Mark Sayre. They were able to get the lounge open in November and plan to fully launch the 26-seat restaurant featuring a Mediterranean-inspired menu early this year.

Husband-wife duo Jenner Tomaska and Katrina Bravo are teaming up to open a restaurant on Chicago’s north side. Tomaska—a two-time nominee for James Beard Rising Star Chef—most recently worked at Next, Grant Achatz’s shapeshifting restaurant where the theme behind the menu changes drastically every few months. Esmé will show off the fine dining chops with the option of a tasting menu in the main dining room, but also feature more casual fare in the bar area as well.

Delayed by Covid-19, the English steakhouse plans to finally make its American debut in 2021. Located in the renovated United Charities Building in Gramercy Park, will serve steaks cooked over a charcoal grill—just like at the original location that cofounders Will Beckett and Huw Gott opened back in 2006.