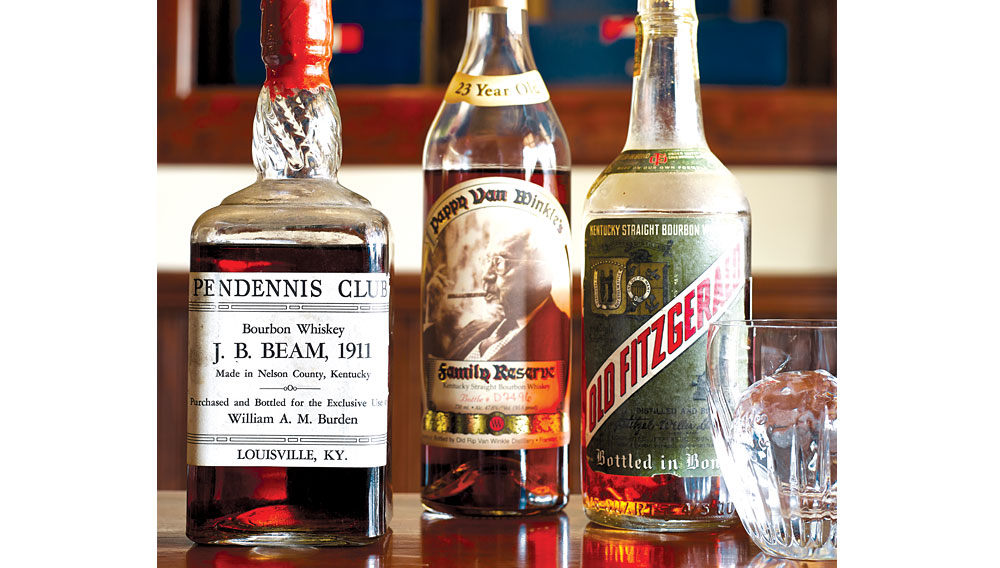 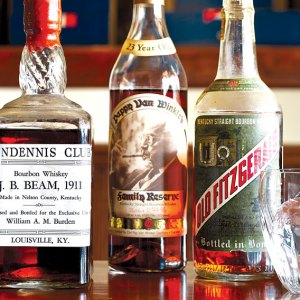 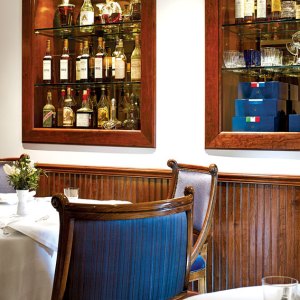 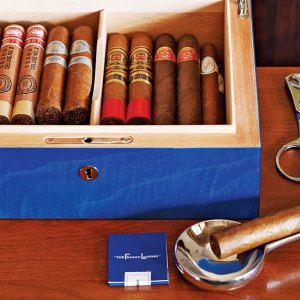 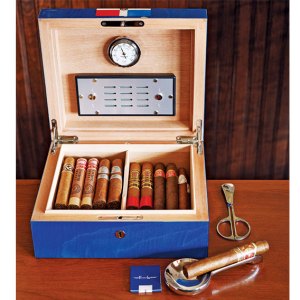 A one-of-a-kind library of rare spirits and vintage cigars, curated by the creators of the acclaimed spirits and cigar menu at the French Laundry in the Napa Valley and tailored to the recipient’s taste.

A private tasting at the French Laundry for the recipient and three guests, with chef Thomas Keller and his team.

Dinner for four at the French Laundry, including an extended tasting menu, personalized gifts, and a nightcap of rare spirits and pre-embargo Havana cigars with Keller.

A custom-built cabinet at the recipient’s home or office to showcase the library and accessories including a full set of Baccarat crystal and custom humidors by Elie Bleu.

™When chef Thomas Keller debuted a menu of spirits and cigars at the French Laundry this year, it was no ordinary collection of nightcaps. Keller had, once again, elevated the dining experience to a new level: After a multicourse meal at his legendary Napa Valley restaurant, one can now savor a selection of rare spirits and pre-embargo Cuban cigars that is unparalleled. The curated list of 40 spirits took years

to acquire and was sourced from private collections and distilleries around the world by the master sommelier Dennis Kelly. Its treasures include The Macallan 57 single-malt scotch in a handblown Lalique crystal bottle (one of 400 in the world), pre-Prohibition bourbons, and a 1900 vintage of Hennessy Cognac bottled in honor of the coronation of Queen Elizabeth II. Equally collectible are the cigars, including a 1961 Romeo y Julieta and rare current releases such as the Fuente OpusX.

Now Keller is offering to create a similarly exclusive library of the world’s most coveted spirits and cigars, tailored to the taste of one Robb Report reader. Like the original, this collection will be rigorously assembled, in a process that begins with the recipient and three guests arriving by private jet in Napa, where they will be transported by chauffeured car to the French Laundry. There, in the restaurant’s courtyard, Keller will greet them at an aperitif-and-canapé reception, which will be followed by an in-depth spirits and cigar tasting with Keller and Kelly to determine the preferences of the recipient and to discuss the nuances of pairing spirits and cigars.

The next day, the recipient and his or her guests will savor a unique dining experience at the restaurant with Keller, beginning with a tour of the French Laundry’s 2.5-acre culinary garden and kitchen. Keller will design and prepare an extended tasting menu for the recipient and guests; this ultimate French Laundry dinner will be served in the restaurant’s private dining room, with wine pairings selected by Kelly. Each guest will receive a sterling-silver clothespin engraved with his or her name, as well as signed French Laundry cookbooks and other personalized gifts. Of course, Kelly will select pre-embargo Cuban cigars and rare spirits to enjoy after the meal.

Then Kelly and the restaurant’s general manager, Michael Minnillo, will begin the yearlong task of building the recipient’s library, a journey that might take them to the monasteries of Chartreuse or the private cellars of a European estate. The final collection will comprise 40 rare spirits and 25 cigars, which will be housed in a cabinet built at the recipient’s home or office by the restaurant’s cabinetmaker. The collection will be delivered by Kelly, who will also pre­sent the recipient with the necessary accoutrements—including a Baccarat decanter, a pitcher, snifters, a cigar ashtray, and a custom Elie Bleu humidor—to mark occasions that will truly be special, thanks to this ultimate gift for the ultimate connoisseur of spirits and cigars.

The gift must be scheduled for 2014, subject to Thomas Keller’s availability.