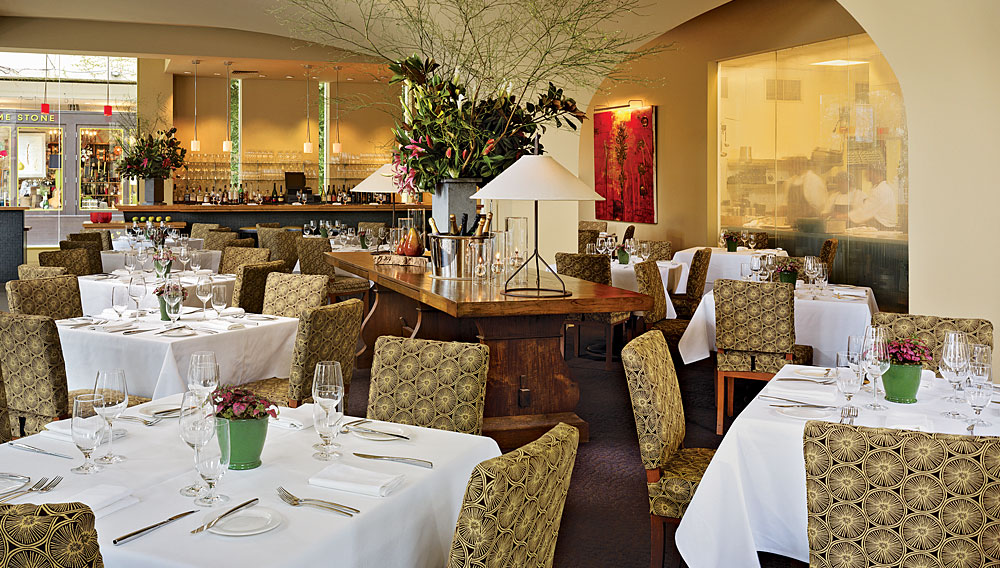 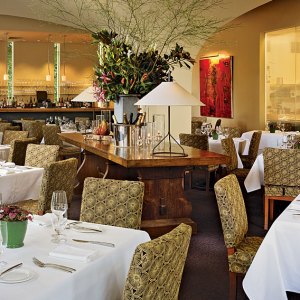 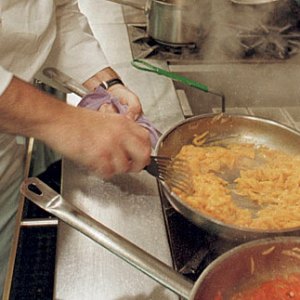 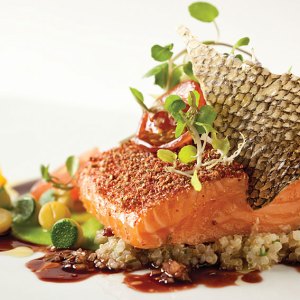 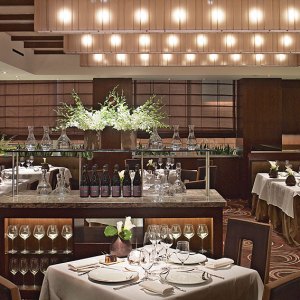 A personal introduction to Palmer’s Sonoma, including a trip to the Healdsburg Farmers’ Market, a tour of the region’s top wineries, a private blending session with the winemaker at Mauritson, and a dinner prepared by Palmer at his Dry Creek Kitchen.

Private-jet service to New York City, with an in-flight tasting of rare wines.

Lunch at Palmer’s Manhattan eatery Métrazur, a private tour of the area’s top wine shops, and a Broadway show followed by a Champagne dinner at the chef’s Aureole restaurant.

A collection of cookbooks signed by Palmer.

Before chefs were celebrities, food was a network, and culinary talent battled on reality TV, a few trailblazers formed what would become the new American cuisine—a marriage of classic techniques and local ingredients that forever changed the way we eat and think about food. Chief among these pioneers was Charlie Palmer, a chef who trained under the great Georges Blanc in France before returning to America to refine the native brawn into dishes of high sophistication. He did it first at New York’s River Café, and then, in 1988, at his own New York restaurant, Aureole. Today, Palmer has more than a dozen restaurants across the country.

For this year’s Ultimate Gift Guide, Palmer will share his culinary experiences and skills with two Robb Report readers, who will join the chef on a five-day, transcontinental food-and-wine experience that will leave them indulged, satisfied, and perhaps just this side of exhausted. The journey begins in the golden landscape of Healdsburg, Calif., an area that seduced Palmer away from New York City in 2001 to reopen the Healdsburg Hotel with a new restaurant, Dry Creek Kitchen. Located in the heart of Sonoma wine country, Healdsburg is surrounded by more than 60 wineries in the Alexander Valley, Dry Creek Valley, and Russian River Valley appellations. The town itself is home to top-tier restaurants, inns, and food shops arrayed around a sleepy central square.

The recipients of this gift will stay three nights in the Plaza Suite of Palmer’s Hotel Healdsburg while partaking in a gastronomic tutorial usually available only to Palmer’s team of chefs—talents that have included Michael Mina and Diane Forley. The two lucky “students” will accompany Palmer to the Healds­burg Farmers’ Market, a few steps from the hotel, as he selects peak-season ingredients for a one-on-two cooking lesson later in the day at Relish Culinary Adventures. “We will go over basic knife and cooking skills that will increase productivity in the kitchen,” Palmer says. Then, depending on what is in season, the students will learn to prepare some classic dishes, perhaps duck ballotine or duck confit. “Impressive dishes,” the chef says, “that they will be able to re-create in their own homes.”

Palmer will then personally prepare a dinner for his guests at Dry Creek Kitchen, a menu that might start with a salad of pears poached in mulled wine, followed by a succulent honey-glazed duck breast. Over the next two days, the chef will take the recipients to some of his favorite wineries—including Rochioli and Mauritson, where Clay Mauritson will lead them in a private blending session. After dinner at Cyrus—a restaurant that has earned two Michelin stars for its California-French cuisine—the recipients will enjoy a day of recovery and relaxation at the Hotel Healds­burg’s spa.

The second half of the gift begins with a private jet to New York, with an in-flight tasting of some of Palmer’s favorite wines, including Domaine Leflaive, Étienne Sauzet, and Jacques-Frédérick Mugnier. After settling into a suite at the chic Bryant Park Hotel (for a two-night stay), the recipients will lunch at Palmer’s Métrazur, which is located on a grand balcony above the buzz of Grand Central Terminal. A night on the town—at a Broadway show of the recipients’ choice—will culminate with a “Bubbles after Broadway” supper prepared by Palmer at Aureole. The next day, the pair will tour New York City’s best wine shops with Palmer’s wine director, Justin Lorenz, a fixture on the New York wine scene who has also developed wine programs for Jean-Georges Vongerichten. Along the way, Lorenz will mentor the recipients on how to select pairings for the dishes they will have learned to prepare themselves.

Palmer hopes the trip will give the pair a “hands-on, insider experience with some of the most knowledgeable winemakers, chefs, and farmers in the country.” Not to mention a glimpse into one of the guiding minds of American cuisine.

The gift is available to one recipient and a guest. Reservations must be made and agreed upon in advance with Charlie Palmer.