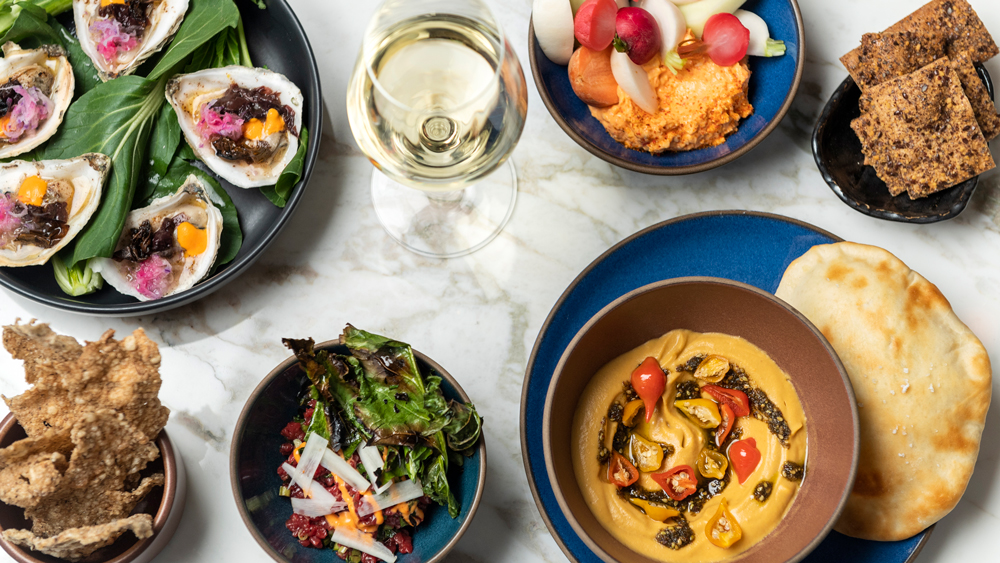 Hearth cooking—which entails baking or grilling food in a wood-burning, brick-lined stove—is common around the world and becoming more popular in restaurants across the U.S. But it’s still a rarity in New York. The cooking method is a challenge for chefs to master; wood is a more expensive fuel than gas; the system requires a well-thought-out hood ventilation system; and, most practically, the permits are nearly impossible to obtain.

Yet a hearth takes center stage, literally right in the center of the dining room, at 232 Bleecker, a vegetable-focused restaurant that opened this week in the West Village. Chef Suzanne Cupps learned the technique while working at Gramercy Tavern and uses the flickering flames to cook most of the menu here. Veggies are caramelized, smoked, charred and ember-roasted, giving them unique textures and flavors that are hard to impart using other methods.

“The brick surrounding the grill changes the way the heat sits,” she said. “Building the fire is hard; it takes technique and finesse to keep it going but also to not get too much smoke.”

While other restaurants use wood fires to give a heavy crust or smoky ring to thick slabs of meat, Cupps is going the other direction.

“We cook monkfish and chicken on it, but really what we’re focusing on is trying to cook vegetables interestingly on it,” she said. “So rather than hard char and smoke, we’re using a little bit more nuance.”

Carrots are grilled and paired with hot honey and ricotta. Oysters are smoked over embers. Cauliflower is charred and served with concord grapes and cashew butter. Breads and citrus fruits are seared. Ricotta cavatelli is topped with basted maitake mushroom ragu. Lasagna is layered with vegan béchamel, kale and Jasper Hill cheeses and baked in the hearth. Montauk Yellowfin tuna, straight off the boat, is dunked in a Thai coconut curry.

Ingredients are recognizable, but combined in interesting ways. And there are only a few elements on each plate, so each individual ingredient has to be great on its own. There’s nothing to hide behind here. This is cooking with confidence.

The restaurant is the first foray into sit-down dining from Dig Food Group, which owns the fast-casual chain Dig, where health-conscious city dwellers have grabbed lunch for years. While 232 Bleecker has the same ethos as its parent company, valuing sustainable product from local farmers and producers (including its own 12-acre farm in Orange County, New York), it has an entirely different menu, which Cupps gets to change up at her own discretion.

“I’m starting with a blank slate,” she said. “The winter is harder because vegetables tend to stick around for a few months, but even with the same vegetables, we’ll do variations on dishes. I like to keep it interesting for regulars so they get to try something new every time they come.”

Cupps came to the project from Untitled at the Whitney; she had spent eight years with Danny Meyer’s Union Square Hospitality group, developing close relationships with farmers and suppliers in the region. (Prior to that she worked with Anita Lo at Annisa and with her mentor, Michael Anthony, at Gramercy Tavern.) But she was ready for something new, something all her own.

“Restaurants change, grow and evolve and I had gone through one evolution of Untitled,” she said. “I just felt that it was my time to step away. I loved it, but it felt like the right time for me to move on. And I can be honest, I had no idea what I was going to do when I made the decision. It was a little bit of a leap of faith.”

Dig Food Group reached out to Cupps and she found them to have the same sensibilities and commitments to healthy dining that she had. And she was excited at the prospect of mastering wood-fired grilling and executing her own vision. Former Food & Wine editor Dana Cowin is also involved in the project. And the drinks program is led by Theo Lieberman, formerly of Eleven Madison Park and Milk & Honey.

In the first days of opening, regulars of Cupps from Untitled and Gramercy Tavern filled the 55 seats at 232 Bleecker. The chef was grateful to see so many familiar faces in what she hopes will become an ambitious neighborhood restaurant.

“Even though this is a very different restaurant [than Gramercy and Untitled], they respond to the type of food I cook—the idea of having market-driven food, sourced carefully and cooked purely, simply,” she said. “And also people go back to restaurants where they’re familiar with the people who work there, where they feel like it’s easy to come and have a meal. It’s about building relationships with diners as well as [being particular about] exactly what you’re serving.”