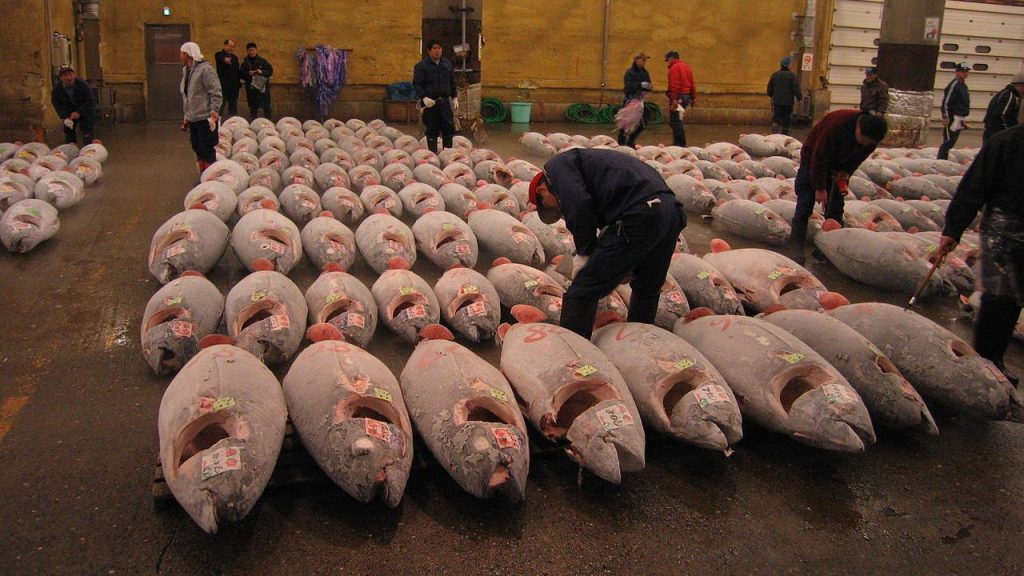 The world famous Tsukiji Fish Market in Tokyo is getting ready to move. As the city prepares to host the 2020 Summer Olympic Games, the world’s largest fish market needs to relocate to make room. But before the 80-year-old market goes, it held one last new year’s auction, where restaurateurs come to bid on prized lots of Pacific bluefin tuna, and it is tradition for them to aggressively throw money at the first tuna of the new year.

For the last seven years, the person making the largest winning bid has been the self-described “King of Tuna” Kiyoshi Kimura, who owns the Sushi Zanmai chain in Japan. But this year he was unseated by the owner of the Sushi Ginza Onodera chain, Hiroshi Onodera, who paid $323,195 for an 893-pound bluefin tuna.

“There were more tuna for sale than I expected this year. Nice and fat,” Yukita Yamaguchi, the person doing the bidding on behalf of Onodera, told the Nikkan Sports newspaper. “I was ready to pay 150 million yen. We’ll get 13,000 pieces of sushi out of it. That’s about 3,000 yen a piece.”

Onodera owns restaurants not only in Japan, but in the last few years has expanded to America as well, opening a high-end sushi counter in New York and Los Angeles. This past year, the New York location, where dinner can cost $400 per person for a tasting menu, was awarded its second Michelin star.

As pricey as that fish may sound, this final auction didn’t break the record for most expensive fish sold at the market. During the 2013 new year auction, Kimura bought a 489-pound tuna for 155.4 million yen, which at the time was equivalent to about $1.8 million.

As buyers spend exorbitantly on tuna, it highlights that the popularity of sushi around the globe has caused overfishing of Pacific bluefin, with the population down to only 2.6 percent of its original size.

“There was hope late last year when governments agreed on a rebuilding plan that could secure the long-term future of the species,” said Jamie Gibbon, a Pacific bluefin tuna expert for the Pew Charitable Trusts. “If countries continue to exceed their catch limits, as they have in recent years, the very survival of the species will be threatened.”