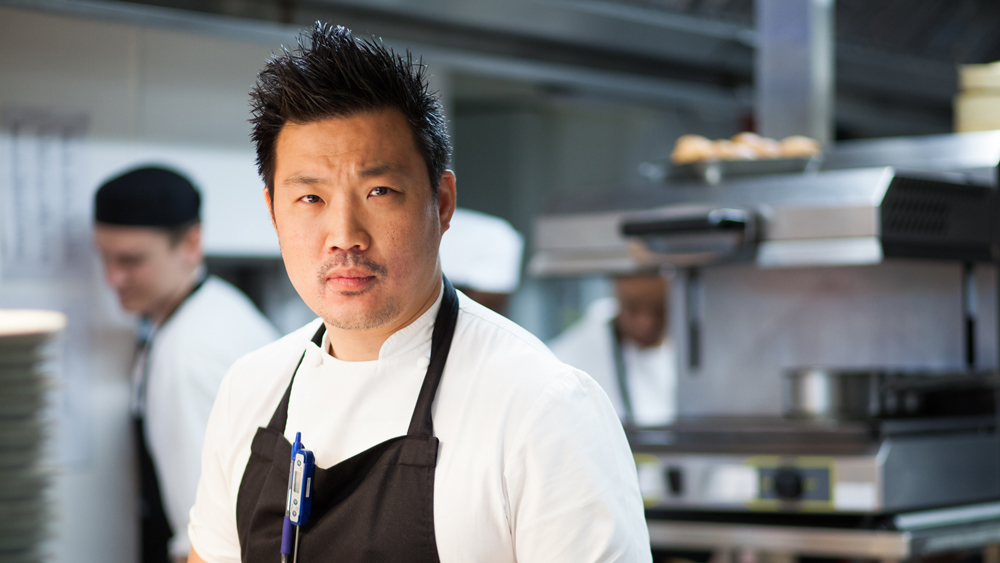 Chef Andrew Wong’s Chinese restaurant doesn’t shy away from the trappings of luxury or tweaks on tradition. At his London fine-dining destination, A. Wong, he’ll top an elegant plate of soy chicken with an osetra caviar wrap. He’s also offered the option of a caviar supplement for an order of Peking duck. And he’s even used a bit of molecular gastronomy to mimic shark fin. But such extravagance aside, the 39-year-old Wong sees his cooking as a way to honor the past.

“What I come back to is the original recipe for soy chicken, Peking duck, crispy pork belly, suckling pig, dim sum—all these dishes that I thought, being an arrogant young chef, I could do better,” he says, recalling the many times when he spent a year R&Ding a dish, only to realize that the essence of it should hew to history. He’s developed a style where he can look at Chinese food through a fine dining lens, while still having a respect for the cuisine he’s working to evolve.

There was a time when the thought of cooking as a profession wasn’t good at all to him. The Oxford-educated chef once rejected a life in restaurants—the industry that his family had worked in for two generations prior. Yet, he’s come not only to love the craft, he’s thrown himself into the culture. And last month he got his just reward. A. Wong became the first Michelin two-star Chinese restaurant outside of Asia. Now chef Wong is setting the table for Chinese restaurants all over the world.

Wong has manifold reference points for the food he serves. He comes from a family of London restaurateurs, and A. Wong is in a Pimlico space that was previously home to his parents’ Cantonese restaurant. Wong cooked in China’s Sichuan province as well as Beijing and Hong Kong before opening A. Wong in 2012.

This restaurant is “about celebrating China as a whole country,” Wong says.

So how do you reflect the diverse food of a nation with 14 international borders and more than 3,000 years of written history? One way you do it is by connecting with a food anthropologist, Dr. Mukta Das, at SOAS (School of Oriental and African Studies) University of London. The chef and the academic met in 2014 and have researched Chinese recipes, ingredients and origin stories together. Last May, Wong officially became a research associate at the SOAS Food Studies Centre.

Shark finning, which is banned in the United Kingdom and many other nations, damages the marine ecosystem. So Wong uses agar to simulate the texture of coveted shark fins. The agar thickens a traditional stock, which involves boiling down whole chickens and then adding oil from ham that’s been rolled in sugar and steamed. The soup, which accompanies a plate of abalone that’s slowly cooked in its own juices, also includes some braised turbot skin that adds even more gelatinous texture.

Another playful dish is called “Why The Buddha Didn’t Jump Over the Wall” It’s a small piece of barbecued sweet potato with some fermented, salted black-bean relish.

“It’s exploring this idea of the Columbian Exchange in the 1500s and what was taken out of South America and ended up in China,” Wong says.

The dish resembles a popular Cantonese dish that’s made with pumpkin and black-bean sauce, but the texture is different.

“It’s basically a vegetarian dish that comes the closest to feeling and tasting like meat than anything like this I’ve ever created,” Wong says.

Coming up with such thoughtful masterpieces—food that bridges different worlds and connects the old and the new—is invigorating for Wong. But before circumstances forced his hand, he had no intention whatsoever of being a chef or restaurant owner.

“I basically grew up in my parents’ restaurant,” he says. “I absolutely hated it.”

He started washing plates when he was about seven. He and his older sister also had front-of-the-house roles before going to college. Wong studied chemistry at Oxford and was pursuing a degree in social anthropology at the London School of Economics. But then his father died, and Wong returned to help out at the restaurant when he was 22. He started spending more time in the kitchen and became curious about cooking.

“And then before you know it, I’ve spent 17 years in the kitchen and I’ve enjoyed every moment of it, actually,” he says.

Now he feels immense gratitude to his family (the A in A. Wong is a loving homage to his parents, Albert and Annie) and also to all the Chinese restaurants that predated A. Wong. The chef’s father was the first Chinese publican in the United Kingdom and his grandfather, a Chinese refugee, owned a restaurant in London’s Chinatown. Wong knows he owes them a great debt, even though he once wanted nothing more than to escape the hospitality business.

“If it wasn’t for the work they did, I could never sit here today and say we have a two-Michelin-starred Chinese restaurant,” Wong says. “It just wouldn’t have been possible because people’s understanding of Chinese food in the U.K. is something that’s evolved over time.” Chinese restaurants in England, he points out, used to serve chips and often capped their culinary ambition at sweet-and-sour chicken balls. When food evolves, it can become both less and more traditional. This is something worth celebrating.

“I am merely a small part of all those thousands of restaurants that have come before us,” Wong says. “Getting two Michelin stars is a massive achievement for me personally and for Chinese restaurants across the world. I think the biggest thing is seeing that Michelin is moving with the times. It’s a global brand that represents multiple cultures and multiple cuisines.”