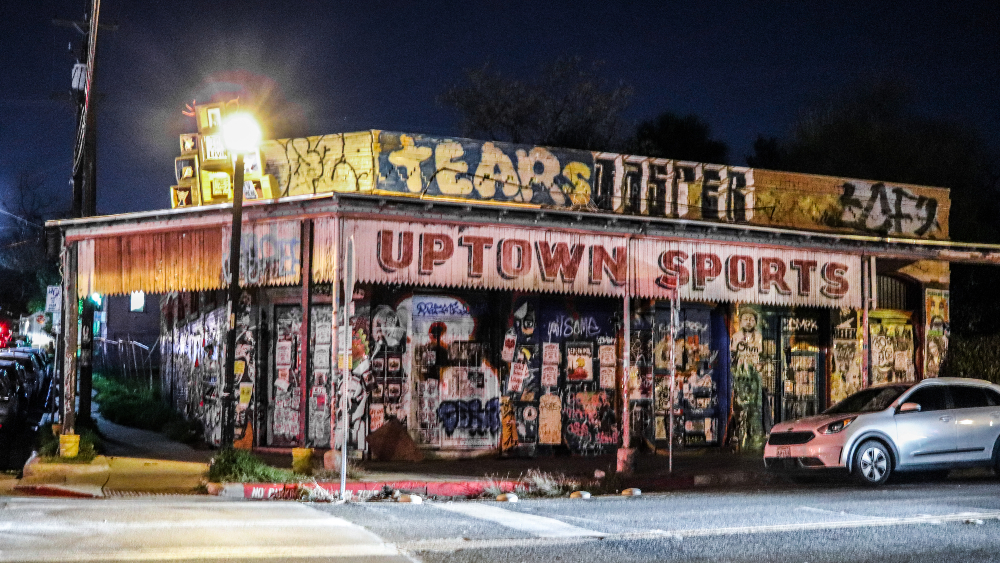 One look at it would make you wonder how anyone could be excited about the building on the corner of East Sixth and Waller in East Austin. Barbecue legend Aaron Franklin can’t hide his enthusiasm. The dilapidated, graffiti-covered corner lot with a shabby awning that reads “Uptown Sports” has been catching his eye for a while. “I like old stuff,” Franklin tells Robb Report. “I’ve been driving by it, staring at it, looking through the cracks in the window being like, ‘What’s going on in there? This building is so cool.'”

He’s not the only one to see potential there—if not in the building that’s been vacant for decades, definitely in the location. “I think secretly everybody has coveted that spot,” says Gabe Erales, the chef at Comedor in Austin. “It’s on a beautiful corner, right around everything.”

So Franklin has partnered with James Moody, a cofounder of his Hot Luck food festival, and a team of local designers and architects to take over the space with Jason Jones, a lawyer who purchased the building back in 2016. They plan to revitalize it and turn it into an all-day restaurant and bar that Franklin hopes will become a neighborhood hangout. To the barbecue legend and his partners, the spot means more than that. Unlike the condos popping up all around Uptown Sports, the building dates back to the 1800s and, for a while, it looked like it could go the way of a lot of other old places in booming Austin. “We essentially came together to save this old building,” Franklin says. “Austin’s changing so fast, and we don’t want it to get torn down. Austin’s really good at just tearing things down.”

The Texas capital is undergoing a dramatic transformation, not unlike what you see in Nashville and Columbus right now or what happened in Seattle as Amazon engulfed the city. Longtime Austin residents will tell you, with a mix of awe and resignation, how the skyline is changing, with towers sprouting up around downtown at a steady clip the last few years. In the annual “Emerging Trends in Real Estate” report by PwC, released in September, the firm ranks Austin as the top commercial real estate market in the country, up from sixth the year before. “Austin has the highest projected population growth rate for the coming five years among the 80 markets we analyze,” PwC wrote in the report.

That has led to a residential boom as well. Home sales in the region broke multiple records in 2019, according to a report by the Austin Board of Realtors released in January. Last year saw the most homes ever sold in the region (up 7.2 percent); the median price was the highest ever (a 2.6 percent increase); the total value of homes sold set a new record; and the median home price in Austin proper went up to $395,000 (a 5.3 percent jump over the previous top year).

The Google logo emblazoned on the top of a modern glass skyscraper betrays the tech expansion underlying the city’s growth. Facebook just opened a new Austin office for its 1,200 area employees, and Apple broke ground in November on a $1 billion, 133-acre campus here that will open in 2022 and can house up to 15,000 employees. The company already has a presence in town, growing its workforce 50 percent in the last five years to nearly 7,000. The influx of tech workers, skyscrapers and condos leaves longtime residents worried that they’ll struggle to “Keep Austin Weird,” as the old motto goes.

Count Franklin in the weird camp. The last 10 years he has become a famed pitmaster while preserving the ethos he calls “Old Austin.” He has grown from a little barbecue spot to the sprawling, eclectic Franklin-Plex he now oversees. Sprinkled behind the original restaurant is an annex housing the barbecue pits, a trailer Franklin has turned into an office and another trailer where he’s serving outstanding breakfast tacos to the neighborhood and the daily line of barbecue lovers. No self-respecting commercial real estate developer would approve such a quirky layout, which is part of the charm.

The Franklin-Plex is achieving his desired result. On a chilly February morning, two hours before opening, a queue of brisketphiles winds around the block, bundled and waiting for their chance to score some of the world’s most coveted barbecue. Despite the cold, hours-long wait, the line has a convivial air that makes it feel as much of a draw as the food.

“It feels old-school awesome,” Franklin says. “Sometimes people are buying beers for each other in line. It reminds me of why I moved to Austin 20-something years ago. And it reminds me of hanging out at Electric Lounge, seeing shows and how nice people were. We’ve managed to preserve my special little pocket of old Austin. And old Austin hasn’t gone away; it’s just getting harder to find.”

With Uptown Sports Club, he’ll keep another little island of old Austin around. The building, which opened more than a century ago as a German butcher shop has mostly existed as a bar—and not so much a sports bar as a sporting club. “Fellows playing dominoes and your normal kind of bar scene,” Franklin says. “Some old neighbors that we’ve talked to remember being kids and looking through the slats in the doors and there was a boxing match going on inside.”

Though the partners haven’t etched the concept in stone, the new Uptown Sports Club (they’re keeping the name) will be an all-day affair, opening early for coffee and a small menu, then transitioning to lunch and dinner. And they looked to the building to give them inspiration on the concept. As they stood on the dirt floors and looked around at the old brick, it came to them. “We cracked a beer in there and thought this is such a New Orleans-y kind of neighborhood-y kind of vibe,” Franklin says. So he’s drawing on the food he ate growing up with his grandfather, who was a Louisiana native, to make gumbos and po’boys for Uptown Sports.

Construction will begin in a month, and while they plan to remake the inside, the exterior will be a different story. They plan to bring the building back to what it was when Austin’s population was half of what it is today. “We’re totally restoring everything like the awning and getting it to the original paint,” Franklin says. “We’re getting nerdy on this thing.”