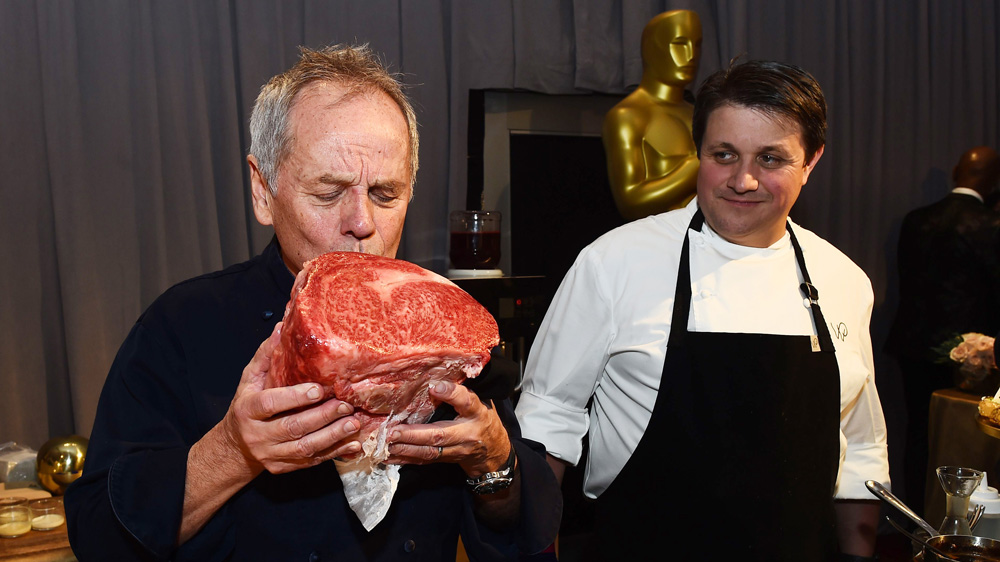 As the Oscar ceremony approached 25 years ago, Wolfgang Puck planned to make a point of doing nothing. For the preceding decade that hadn’t been the case. Legendary literary agent Irving “Swifty” Lazar had thrown L.A.’s best Academy Awards party at Spago, with Puck helming the kitchen. “Forget about the Governor’s Ball, no big star went to that at the time,” Puck tells Robb Report. “Swifty’s was the really big party to go to.” But in 1994, that changed. Just a few months before Oscar night, Lazar passed, and Puck says, “I didn’t want to do a party—we wanted to keep the night dark in his honor.”

Hoping to bring attention to their soiree, the organizers behind the Governors Ball saw Puck’s empty dance card as an opportunity. So they approached Los Angeles’ hottest chef-restaurateur to convince him to cater their gala. Puck, always one to challenge himself, was intrigued by the offer to cook for 1,500 megawatt stars. He agreed to do the Ball on his own terms, turning it from an also-ran to the event to attend. Now, two and a half decades later, Puck readies himself for Hollywood’s biggest night, while reflecting on the last 25 years of Oscars.

That first party almost didn’t get out of the gate. As part of his original agreement with the board of governors, Puck insisted on autonomy. He told organizers that, “As long as you let me cook what I want to cook, I’ll do it. I don’t tell you how to make movies, you don’t tell me how to cook.” That plan nearly went out the window on day one. As members of Puck’s team went to meet with the organizers, the people planning the ball started making demands of the menu, listing items akin to what you’d be served at your cousin’s wedding. “I still remember my chef calling me saying the organizers were telling them to give them chicken and fish and that we had to do this and do that,” Puck says. “I said to my chef, ‘Tell them to stay out of the kitchen.'”

After tasting the menu Puck wanted to serve—which included a chop salad with lobster, lamb chops from his restaurant Chinois, Spago’s roasted salmon, and a chocolate cake with a golden chocolate Oscar on top, the Governor’s Ball team backed down. Of course, getting the menu approved was one thing, actually executing it for 1,500 people was another.

Although Puck now has a catering company that operates across the country, back then he had to call in reinforcements. Chefs from Austria, San Francisco, and Vegas pitched in, as well as nearly 50 students from Le Cordon Bleu cooking school. That first year there was no facility big enough to hold them all. So Puck and team constructed a makeshift kitchen inside the parking structure by the venue. To make things worse, the Fire Department wouldn’t let them operate the propane stoves inside the garage, forcing them to fight L.A.’s unseasonable cold, wind, and rain that night.

The team persevered through the substandard kitchen and weather to deliver a hit. As he strode through the dining room, the stars in attendance realized why the food was so much better that year than in the past. The Governor’s Ball went from the party that even nominees skip out on to the premiere event in the biggest night of L.A.’s social scene.

That’s not all just because of the food—though this year’s menu of Nashville-style fried quail, a ricotta dumpling inspired by Puck’s mother, and Miyazaki wagyu beef tartare does sound pretty delicious. Anyone who’s stumbled across Puck on HSN, enthusiastically hocking his branded rotisserie oven, can see that he’s a master showman. On top of that, he has a keen understanding of celebrities and working the room in order to make them feel appreciated. When Halle Berry won her Oscar for Best Actress in Monster’s Ball, Puck knew Krug was her favorite Champagne, so he had it waiting for her when she arrived. And when Ang Lee took home Best Director for Brokeback Mountain, Puck and his chefs whipped a special meal of Chinese style kingfish with ginger, garlic, scallion, and chilies.

And 25 years on, the gig has become even bigger than the chef could’ve imagined. Less than a month ago, Puck jetted down south to the seaside town of Punta del Este, Uruguay. As he walked down the beach, a woman ran up to him exclaimed, “You’re the chef that cooks for the Oscars! We watched the pre-Oscars where they show what you do. Can I take a picture?” To his amazement, it didn’t stop there. “The next thing you know, I had 20 women around me saying, ‘Oh my god! Can I take a picture?'” Puck says. “That’s the last thing I would have thought being all the way down in South America—that people would approach me on the beach about the Oscars.”