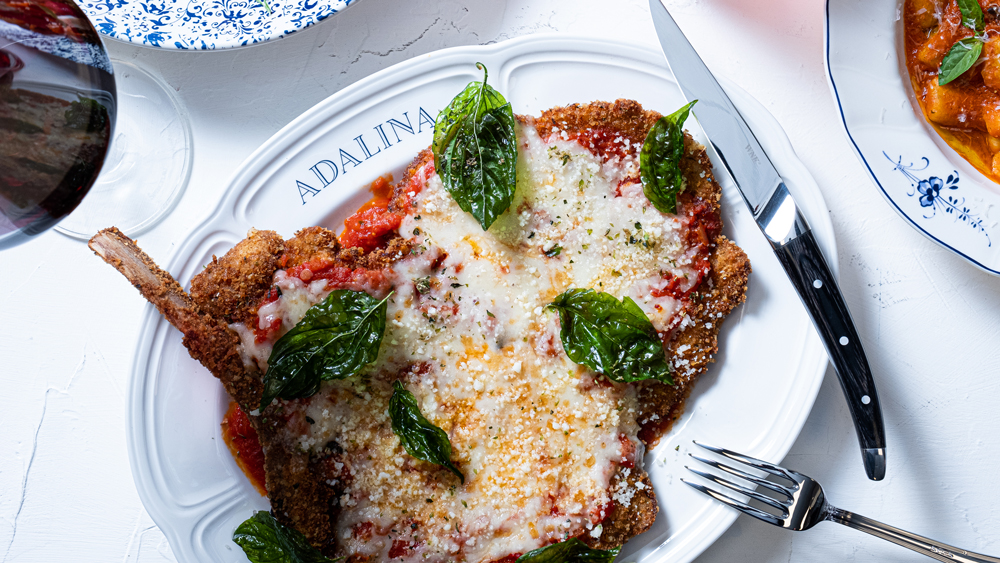 You’ve got to have guts to open a red sauce joint in Chicago, especially if you’ve never even been to Italy before. But if chef Soo Ahn has proven anything this past year, it’s that he has nerve.

In 2020, Ahn walked away from Chicago’s Band of Bohemia, where the executive chef had earned a Michelin star for the restaurant, citing a toxic work environment. It was the first brewpub in America to earn a coveted star, and Ahn’s departure sparked a reckoning; the owners shuttered it and declared bankruptcy soon after.

Now Ahn is back in the kitchen, translating his offbeat culinary sensibilities into Italian—even though he’s yet to visit Bel Paese. He is leading the team at Adalina, a new two-story restaurant inside the No. 9 Walton building in Chicago’s Gold Coast neighborhood and he is aware of all the expectations that come along with that.

“I’m not saying that I’m your nonna who can cook you amazing gnocchi,” he said. “At the same time, I’m not going to bastardize any classic Italian flavors or ingredients. I try to highlight them as much as I can, giving them a little Soo twist and having fun with it.”

The multi-story Adalina, which opened this week, is a collaboration between Matt Deichl (BDG Hospitality; LiqrBox, Bounce Sporting Club), Phil Siudak, Miles Muslin and Jonathan Gillespie. The restaurant’s first floor includes outdoor seating and a bar, colored antique mirrors, plush velvets and leathers; the second floor houses the main dining room. The showpiece is a floor-to-ceiling wine cellar, which stocks 3,000 bottles, plus a decanting station that is dramatically lit from above by a custom Italian chandelier made of 150,000 crystals.

Diners will recognize some dishes on the menu like classic meatballs, handmade ravioli and veal parm. And then there are the more adventurous items that Ahn has come up with, inspired by techniques he’s seen and his previous work experiences. (Before Band of Bohemia, he worked for several Italian chefs and did time in the kitchen at Torali, the Italian steakhouse in Chicago’s Ritz-Carlton.)

“They’re the kind of items you read on the menu and you’re like, ‘What is this?’” Ahn said. “And then you eat it and you’re like, ‘Oh my gosh, this is Italian but not Italian. I don’t get it, but I love it because it tastes so good.’”

For example, a classic combination in Spanish cuisine is octopus, potatoes and paprika. At Adalina, Ahn Italian-ized that dish by combining charred octopus with sunchokes, Sicilian pistachios, Calabrian chilis, fennel and horseradish goat cheese. He also made cacio e pepe arancini (stuffed and fried rice balls) with forbidden black rice and threw some cheesy aioli and guanciale lardons on them. And his caprese salad includes fried green tomatoes.

He credits his chef de cuisine Sam Rosales, formerly of Monteverde, for helping him make his semi-Italian concepts for dishes more regionally sound, staying true to Northern or Southern Italian fare with ingredient selections. However, they have been encountering issues sourcing things like meats, cheeses, nuts, oils and finishing vinegars directly from Italy due to the current hiccups in the supply chain.

“You would find a product, you would like it, you make a dish with it and then a week later, the vendor would be like, ‘Oh, sorry, we can’t get that anymore,’” Ahn said. “You have to constantly be looking for backups on backups on backups. You just have to roll with the punches right now. It’s a fun game to play!”

The Adalina team also includes Jean Banchet Award-winning pastry chef Nicole Guini (Blackbird, Avec), sommelier Alexandra Thomas (RPM Seafood, Spiaggia) and GM Tee Efendija (Parliament). While Ahn envisions accolades for his crew, he has more pressing concerns, perhaps as a result of how it ended for him at Band of Bohemia.

“Would I want another star? Yes. I’m not going to lie to you about that,” he said. “But I’m going to take it one step at a time. I want to work on the culture in the kitchen first. I don’t want my guys to wake up in the morning and dread coming to work. I want to create an environment where my cooks can learn and flourish and be themselves and they can go on to become chefs, sous chefs, executive sous chefs.

“I truly believe that by cultivating the right culture in the kitchen, all the accolades will follow. I’m not really worried about that.”

He’s focusing on communication and constructive criticism with his staff, as opposed to passive-aggressive or hyper-aggressive behaviors commonly displayed in the kitchen.

“When I was younger, I revered chefs. I looked up to chefs with Michelin stars,” he said. “But more than anything, this pandemic showed how toxic of a culture these restaurants produce. There’s this whole weird hierarchy where the chef is revered as this god. You can’t talk to him. Don’t even look at him. Make sure you’re out of the way when he comes into the kitchen. I’m the total opposite. I try to relate to my guys as much as I can. If there’s anything they need, I’m always there to help them out in any way possible.

“I want to get away from the norm and try to create something that’s less toxic or not toxic. Learning from my past chefs and my past experiences, I’m just trying to do better.”